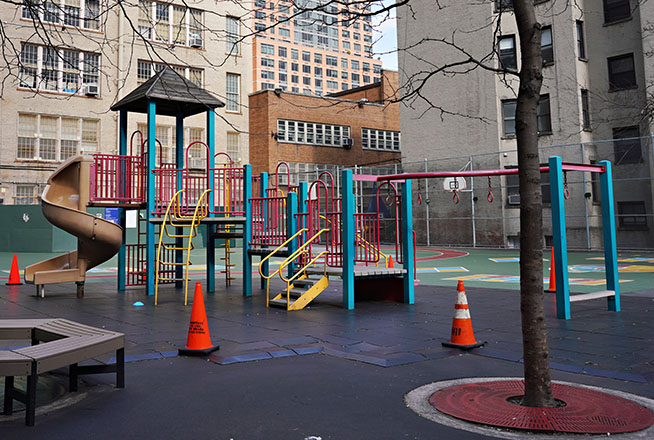 Private schools open their applications the September before a child would begin attending, as does Hunter College Elementary, a publicly funded K-12 school for the “highly gifted.”

Public middle and high school applications are due Dec. 1, which means the fall is spent taking tests, auditioning, interviewing and/or putting together a portfolio. General education kindergartens need to be ranked in late December/early January, while tests for gifted and talented programs are administered throughout January — if a family was on the ball enough to sign up in October.

Private schools notify of acceptances in February, public middle and high schools in March. Kindergarten this year was pushed back to April, as were G&T scores. As a result, I have been on the phone nonstop over the past few weeks, helping parents figure out their options for September.

Those who have jobs that require them to be in New York City or can’t afford to move out are hunkering down and trying to figure out how they’ll make this work, especially if, as Schools Chancellor Richard Carranza predicted, there will be only a “50-50 chance” of school buildings reopening in the fall.

But many parents are calling from outside of the city. They’ve fled to their summer homes, to the suburbs, to out-of-state rentals. There, while their children engage in remote learning, they are trying to figure out whether they’ll even return in time for the new school year.

About half are telling me that if school is, once again, remote come September, they will relocate permanently. “Why should I pay Manhattan real estate prices, not to mention food and other cost-of-living expenses, so that my child can learn from a screen, when I can pay the same amount of money for three times the square footage, a backyard and a perfectly decent neighborhood public school I don’t have to apply to a year in advance?”

On the other hand, I have parents telling me, “I can pay the same amount of money for three times the square footage, a backyard, and, since this is officially just temporary due to COVID-19, my child can still stay registered at our hard-won NYC school and continue attending it online! I didn’t pick this school for the building it’s housed in. I picked it for the curriculum, the teachers and, let’s be honest, the name-brand recognition. With remote learning, I can still have all that without needing to stay in NYC!”

That’s confusing enough — but the decision of whether to stay or go for September 2020 and beyond just became harder. Up to this point, fifth- and eighth-graders applying to public screened middle and high schools, respectively, had to submit the previous year’s final grades and state test scores in order to be considered for admission.

But in March, the state of New York canceled tests for the 2019-20 academic year, and in April, Mayor Bill De Blasio announced that final grades would be marked only as either “meets standards” or “needs improvement.” All numerical grades earned in the six months prior to the pandemic would be disregarded — meaning that this year’s fourth- and seventh-graders will have nothing to show next year, when it’s their turn to apply.

This has left parents panicked. De Blasio and Carranza have repeatedly spoken about how screened schools are immoral (their own kids attended screened schools, but that was totally different). So parents fear that Carranza, as he said himself, won’t “waste a good crisis” and will take advantage of the pandemic as a way to get rid of screened schools in fall 2021 — and permanently.

That’s unacceptable to many families. They will not send their children to schools where only 5 percent of students, or less, are performing at grade level. The mayor and chancellor dismiss all such objections as racism. They insist that only white and Asian families push back against unscreening schools because it would mean going to school with black and Hispanic students. Except that when rumors circulated that the city was planning to unscreen The Manhattan Center for Science and Mathematics High School, it was the majority-Hispanic student body that revolted.

They organized a walkout to protest “the secretive unscreening of Center” and flooded Twitter with messages that read, “When will you realize that MCSM is a highly successful school that consists of 95% minority’s and has a 98% graduation rate and making MCSM into a zone school will ruin it,” and “How dare you work behind our school’s back to take away our screening. Every student worked hard to get into this school. Please rethink this decision. We don’t deserve to be punished.”

This is exactly what would happen if, due to the lack of grades and test scores, all NYC middle and high schools were de facto unscreened — without the mayor needing to pass a formal policy … which also means not needing to ask for public feedback.

Parents and students of all races and ethnicities care about education. It’s one of the main reasons that black parents in NYC have the highest opt-out rate from their zoned schools.

If schools remain closed in September, or if admissions policies for the following year are drastically altered, the city will likely face an exodus of families from every racial group and economic stratum.