Review: In Arne Duncan’s New Memoir, Reflections on Putting Kids First, the State of Our Union, and the Lies We Tell About Our Schools 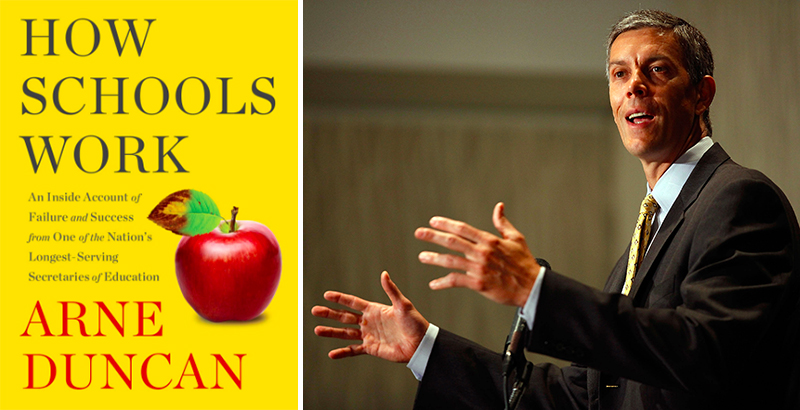 I just got back from a week away from D.C. It was … strangely unsatisfying. See, if you live here in the federal capital, you’re accustomed to living a life constantly intertwined with politics. When you leave, a good chunk of the time, you’re trying to escape. Those people out there, you think, must be watching baseball and taking care of the daily drone of 21st century life. They’re not obsessing over the color of the trim on the vice presidential motorcade or changes to the seating chart of the White House briefing room.

And yet, central Pennsylvania seemed rife with cynical political rhetoric. At the flea market, there was the man blasting conservative talk radio and joking that his customers should mail various of his wares — which included knives and gun accessories — “to mess with [their] favorite Democrat.” At the playground, there was the woman who complained when I was speaking Spanish to my children (her young daughter was named Melania).

There’s no escape. Our toxic politics are everywhere, including in education. Now, more than ever, the broader education community is blanketed by calls to “do what’s right for kids” (though we don’t appear to agree on what that means). So it’s an opportune time for How Schools Work: An Inside Account of Failure and Success from One of the Nation’s Longest-Serving Secretaries of Education, by President Barack Obama’s first secretary of education, Arne Duncan.

In his nearly seven years at the U.S. Department of Education, Duncan pushed the very limits of a child-centric approach to education politics. His avowed commitment to kids is right there in How Schools Work: “I didn’t think my guiding principle — when it comes to education, we need to put kids first — was that radical, but I’ve found that it actually is.”

This airy, gold-hued commitment to “doing what’s right for kids” is ubiquitous in public education. It’s like being pro-life or pro-choice. In the abstract, no one’s opposed to life, choice, or kids. But that’s the trouble: Almost anyone promising to step up “for the kids” can usually find a way to stamp that imprimatur on his or her own platforms. After just a little exposure to today’s national political cynicism, words like these can seem empty rhetorical calories.

Not so with Duncan. His tenure was marked by the focus and tenacity of converting that guiding principle into meaningful actions. Backed by billions of federal dollars in the Obama administration’s Race to the Top competition, Duncan pushed states to raise academic expectations, reform teacher evaluations, and develop better systems for tracking students’ achievement. Just three months before Duncan resigned, Politico’s Michael Grunwald wrote, “In a cynical town of posturing and spin, Duncan has earned a reputation for saying what he means and doing what he says.” He repeatedly courted scorn from all quarters, as befits a happy warrior who can actually define his guiding principle.

How Schools Work is partly an extension of that crusade — and part exasperation at American indifference to the injustice and inequities baked into our public education system. It’s organized around the many lies Americans tell one another about our schools. We — educators, schools, the general public — tell kids and families they’re right on track to succeed in school and life, when they’re actually years behind. We tell ourselves America values its educators and that our colleges and universities prepare new teachers for the classroom. We tell teachers they have all the tools they need, then demand that they do much more and better without any additional support.

You can’t rectify the damage wrought by lies without providing new information to expose them. Unsurprisingly, then, Duncan repeatedly stresses the importance of benchmarks for students, educators, and administrators. Recounting a conversation with Chicago’s then-mayor Richard M. Daley, Duncan explained, “Data doesn’t tell the whole truth, but it doesn’t lie.” Put another way, it’s easier to do what’s right for kids if you insist on measuring how you’re doing.

In one anecdote from his time as superintendent of Chicago Public Schools, Duncan explains how he relied on data to swing a crowd of parents skeptical about his plan to close their neighborhood school. Confronted in a public meeting, Duncan explained that, even though every second-grader at the school had been promoted to third grade the year before, just six of the 70 or so were reading at grade level. Duncan reports that he closed with, “You’re free to call me a racist, but I’m not one, ma’am. If I were a racist, then I would leave this school exactly as it is right now. That’s not what I want. They’re children. I believe in them as much as you do. They can’t wait for things to improve any longer. They deserve better now.”

While How Schools Work is full of smart ideas for U.S. public education, it’s really about that Chicago parent meeting and the state of our union. It confronts one of the core premises of a healthy democracy: We can’t get serious about improving our debates — let alone our policies — if we’re unwilling to ever be persuaded. And, perhaps more important, we can’t be open to persuasion if we’re unwilling to let facts sway and compel us.

Back in 2015, when Duncan resigned, I worried that he was already stylistically and substantively out of step with U.S. politics. Here in Washington, I wrote, ours “is a world where self-effacement is usually career suicide, and where a man who genuinely isn’t concerned about his standing in the polls or the newspapers is deeply confusing.”

How Schools Work distills Duncan’s ethos, and — implicitly — raises some of the biggest questions. Can we build a better education system simply by opening ourselves to research and caring a lot? Or are we doomed to corrosive fights that preclude us from having hard, uncomfortable conversations about what might actually help children? Because that’s what Duncan thinks is the biggest lie: We tell ourselves that we care about kids. We don’t.

If we can’t embrace earnest, hard-driving politics when it comes to kids — innocent, high-potential, brilliant, charming, deserving kids — what hope do we have of getting serious about anything else?

Conor P. Williams is a fellow at The Century Foundation. Previously, Williams was the founding director of New America’s Dual Language Learners National Work Group. He began his career as a first-grade teacher in Brooklyn. He holds a Ph.D. in government from Georgetown University, a master’s in science for teachers from Pace University, and a B.A. in government and Spanish from Bowdoin College. His two children attend a public charter school in Washington, D.C.