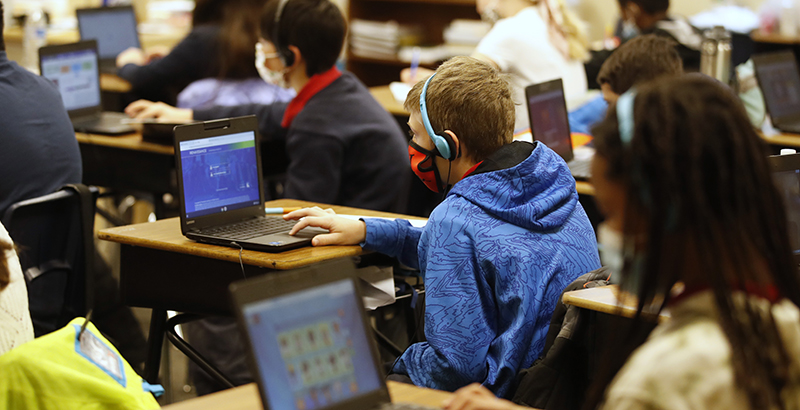 The last time states graded schools and pinpointed the lowest performers was after the 2018-19 school year — a lifetime ago for many educators.

That was before the pandemic, before tests were cancelled in 2020, and before many parents opted their children out of tests in 2021. Because states now lack the year-to-year results they typically rely on to make decisions, determining which schools need the most help will be complicated.

But the pandemic has made such determinations more important than ever. While incomplete, the data states collected last spring showed “staggering” declines for students in reading and math, according to a summary from the New Hampshire-based Center for Assessment, and COVID-19 is now disrupting the third school year in a row.

“Let’s assume we have a normal year,” said Allison Timberlake, deputy superintendent for assessment and accountability at the Georgia Department of Education. “At best, we have strong ‘22 data, pandemic-impacted ‘21 data and no ‘20 data. How do we identify the right schools? The ones we identified before the pandemic are not necessarily the ones we should identify after the pandemic.”

Education advocates and civil rights groups say it’s important for states to resume the process of naming their lowest-performing schools so districts can best target resources, including federal relief funds. States identify those schools on annual report cards and mandate interventions from providing free tutoring to bringing in new leaders to turn schools around.

Fifteen organizations argued in a recent letter to U.S Secretary of Education Miguel Cardona that parents and educators need to know where their schools stand, urging him not to grant waivers from ESSA’s accountability provisions this Spring as he did last school year.

“We felt like we needed to put a mark in the sand,” said Jim Cowen, executive director of the Collaborative for Student Success, a nonprofit advocating for strong accountability systems. “This is very concerning from an equity standpoint.” An education department spokeswoman confirmed receipt of the letter and said officials welcome input from others.

The groups also noted wider interest in making long-needed changes to assessment and accountability systems, but argued that “now is not the time to open up the Every Student Succeeds Act to rethink the strong assessment requirements of the law.

“However,” they added, “we acknowledge a desire from diverse stakeholders across the country to consider new types of assessment systems and designs.”

The Center for American Progress, a left-leaning think tank and one of the groups signing the letter to Cardona, discussed some of those new approaches in one of three papers on assessments released this week. Those models might get more attention as states emerge from the pandemic.

“This is not going to be the last time we have such a major disruption to education,” said Laura Jimenez, the director of standards and accountability at the Center.

The approaches include having students demonstrate what they know through complex projects and testing students on a sample of questions to reduce the amount of time schools spend on assessment. California, for example, has already announced plans to shave one to two hours off testing time next spring by giving shorter versions of the Smarter Balanced tests, which measure students’ knowledge of Common Core standards in reading and math. And Florida Gov. Ron DeSantis on Tuesday announced plans to retire the end-of-year Florida Standards Assessments and move toward a “progress monitoring” system throughout the year.

Federal law requires states to test at least 95 percent of their students, but rates last year varied widely. In Georgia, participation ranged from a high of 79 percent in third grade to a low of 55 percent in high school, especially in the metro Atlanta area where schools didn’t open for in-person learning until later that spring.

“It is essential that these results be interpreted in the context of the COVID-19 pandemic and associated learning disruptions, along with differences in participation,” said an Aug. 16 press release from the state education department. Georgia Superintendent Richard Woods was among those who argued against testing last school year.

Colorado — another state that saw considerable debate over whether to test students last year — had participation rates of less than 60 percent in some districts. But other states, particularly in the South where higher percentages of students attended school in person, saw much higher rates. Arkansas, Louisiana and Tennessee had statewide rates well over 90 percent.

Tennessee added an incentive to increase participation, exempting schools from receiving a grade or a ranking if they tested at least 80 percent of their students. Every district met or exceeded that goal, according to the state education department.

Research from the University of Missouri shows that a single year of missing data is not enough to throw off accurate measures of student performance trends at individual schools. But if two years of data are missing, it gets harder because in most cases, students would have either moved on from elementary to middle school or from middle to high school. Only the District of Columbia received a testing waiver for two years.

Similar challenges face states such as New Jersey that opted to hold off on standardized testing until this fall.

“It takes time just to figure out which students are in which school,” the authors of a blog post from the Center for Assessment wrote last January. They added that teachers and students aren’t ready for state testing in the fall, given the other activities involved in beginning a new school year.

Cory Koedel, an economist at the University of Missouri, said errors could result from using the data from districts that had low test participation last year. But he added it’s a mistake not to work with what’s available.

“That’s an error of pretending we don’t know anything” about student performance, he said.

Where students spent most of the 2020-21 school year — remotely, at school or combination of both — affected their performance and that’s important for the public to know, experts said.

They point to a recent report on Ohio state tests as an example of how to provide a nuanced look at the impact of remote learning on results. Ohio State University researchers found that as in-person learning increased during the period from November through April, so did test scores.

In Florida, DeSantis’s plan to end the state’s existing testing program will likely draw more attention to newer models for assessing students. But Scott Marion, executive director of the Center for Assessment, said the current federal law requiring states to test students every year hinders efforts to try some of the new approaches described in the Center for American Progress papers.

“You can’t have both innovation and strict accountability. Something’s got to give,” he said. The states he works with, he added, aren’t asking Cardona to completely waive accountability requirements as he did for the 2020-21 school year, but they are “saying we need some flexibility to do things differently.”