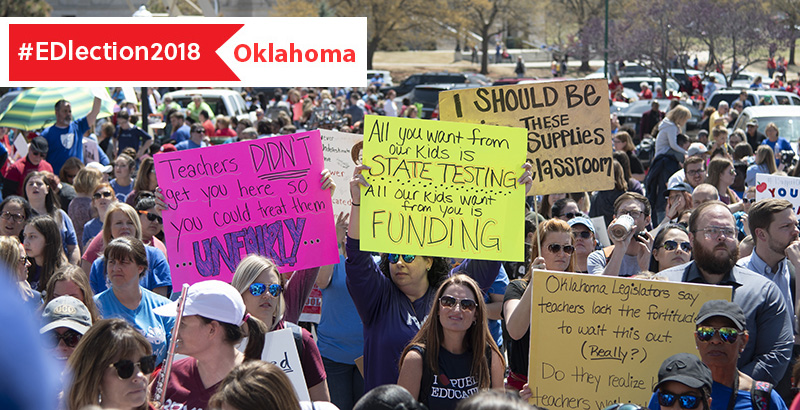 Updated June 27: Republican candidates Mick Cornett and Kevin Stitt will go head-to-head in a runoff election in August, after they won 29 and 24 percent of the vote, respectively, in Tuesday’s crowded and contentious primary. Democratic candidate Drew Edmondson won his party line and will face either Cornett or Stitt in November.

Oklahoma’s election year is bursting at the seams with contenders, with 794 candidates filing for public office in April, more than two dozen of whom are teachers. The candidate pool is the largest in at least 20 years.

That massive group races toward a June 26 primary, and the state’s top seat is up for grabs. In the hotly contested gubernatorial election, a runoff election is expected in August on the crowded Republican side, until one candidate receives at least 50 percent of the vote.

Although none of those teachers sit among the leaders in Oklahoma’s gubernatorial race, educators are having a banner election year, as education has risen to the top of candidate platforms and has received far more airtime than in recent history.

Oklahoma’s nine-day teacher walkout in April — part of a national movement of teacher strikes — has made for a tense political landscape this year. The protest finally ended when lawmakers in the red state signed off on legislation to increase taxes for school funding and teacher pay. This drew fury from both sides. Teachers continued their strike, saying the funds were too little, while conservatives said lawmakers who increased taxes should be booted out of office.

All of this has put a spotlight on how the five leading gubernatorial candidates address education in their campaigns. The Tulsa World made its GOP primary endorsement based on the candidate who it believed had the least repulsive response to the teacher strikes — Republican Mick Cornett, a former Oklahoma City mayor. Democratic candidate Drew Edmondson leads his education platform with a pledge to pay teachers more. Republican candidate Lt. Gov. Todd Lamb released a 30-second advertisement declaring a plan that “cuts waste” while promising reforms.

A News On 6/News 9 poll found that the front-runners on the Republican side include Lamb with 23 percent, Cornett with 20 percent, and businessman Kevin Stitt with 14 percent. (Ten Republican candidates pack this primary, though the others barely make a dent in the polls).

On the Democratic side, former Oklahoma attorney general Edmondson leads with a much larger margin of 44 percent, followed by recently retired state Sen. Connie Johnson at 14 percent.

Republicans control the governor’s office and the legislature, though the state is no stranger to Democratic governors — a long string of Democrats led Oklahoma from 1971 to 1995, and again from 2003 to 2011. Oklahomans have a distaste for current Republican governor Mary Fallin, who received a 20 percent approval rating in a recent poll. But those same respondents gave President Donald Trump an 80 percent approval rating.

Especially on the Republican side, candidates must walk a fine line between advocating for more attention paid to education spending and limiting tax spending. They’ve all learned the lesson of how not to address the recent education funding crisis from Gov. Fallin, who called the striking teachers’ demands “like having a teenage kid that wants a better car.” She also said she hoped the teachers would say “thank you” after a bill she signed increased teacher pay.

This only added to the striking teachers’ fury, culminating in nine days of missed school and a list of demands, many of which remained unmet.

The gubernatorial candidates’ carefully worded platforms and interviews may also be influenced by politicians who publicly scorned the teacher walkouts and are now facing contenders in their race for office. Cyndi Ralston, who has been a teacher in Oklahoma for 30 years, is running against current Rep. Kevin McDugle for a House seat, after he said he would vote against all education funding in retaliation to the strikes.

“For years, my profession has been under siege by our legislature,” Ralston wrote in a Facebook post that received nearly 6,000 likes and 3,000 shares. “Budget cut after budget cut have forced us to do ever more with ever less, and it cannot continue on this path.”

More than two dozen teachers are running for seats in the state legislature. All of Oklahoma’s House seats are open, as are half of the Senate seats.

For the past 10 years, Oklahoma lawmakers have faced the challenge of finding sources for state funding amid declining oil revenue. Although this year saw the state’s largest budget on record, Oklahoma has a long way to go to make up for the losses from years of cuts, Oklahoma Watch reports.

About 20 percent of schools, many in rural areas, run on four-day school weeks to help with limited costs and to attract teachers. Still, Oklahoma ranks among the worst when it comes to teacher pay, with an average starting salary of $31,000, well below the national average of $38,000. Many teachers are fleeing for neighboring states like Texas where the average starting salary is $9,000 higher. The exodus has resulted in the hiring of thousands of uncertified teachers in Oklahoma.

The state received a D grade in education in 2018 — a 45th-place ranking nationwide — from a national scorecard that factors in early childhood enrollment, student loan debt, high school graduation rates, and math and reading scores.

Here’s how the top five candidates plan to address the state of education in Oklahoma:

Recently voted one of the world’s 50 greatest leaders by Fortune magazine for his work creating temporary taxes to fund projects in a conservative city, Cornett is also well known for bringing the NBA to Oklahoma City during his time as mayor.

Cornett is hoping to ride that success from his mayoral term through the primaries. The Tulsa World gave him its GOP endorsement — though with a half-hearted “we could do better” disclaimer — for standing behind a bill that boosted teacher pay.

Cornett was initially against the teachers’ strike. “I understand they’re desperate at this point. But that is not something I would support. As much as I support teachers, I don’t support a strike,” he told NewsOK.

But a month later, he seemed to take a different tack, stating that he was glad Gov. Fallin signed the bill to increase teacher salaries and education spending, NewsOK reported.

His platform supports increasing educator pay to the point that Oklahoma can be regionally competitive. He also supports raises for teachers in science, technology, engineering, and math to help with recruitment.

Edmondson is once again running for governor after a failure to win the Democratic primary in 2010, after which he declared he would never run for office again.

Edmondson has been one of the most vocal candidates about increasing teacher and support staff pay, leading his education platform with this demand: “Number one — we need to raise pay for our teachers and reduce administrative costs to put money back in classrooms.” He added that the state also needs to stop cutting funding for higher education.

He supported the teacher strikes and called out Gov. Fallin for being one of the last people in the state to wake up to the crisis of poor education funding.

Edmondson backs a 7 percent tax on oil and gas to help increase funding for education, as well as an end to capital gains exemptions.

Johnson has served as a state senator in Oklahoma for 33 years, during which she advocated for reproductive health care and mental health services and campaigned against the death penalty. She was the first woman and African-American to receive a major-party nomination for the U.S. Senate.

She has also been a longtime champion of marijuana legalization — an issue on the June ballot — which she hopes could help her through the primary.

She supports raising teacher salaries to match regional ones, restoring programs that have been cut in schools like Advanced Placement classes and art, making two-year colleges free, and expanding early education programs in Oklahoma.

To manage crippled education budgets, Johnson told the Tulsa World she would “hold schools accountable to fund educational programs based on community needs” as well as end preferential tax cuts.

Before serving in the state senate and as lieutenant governor, Lamb worked in the petroleum industry and as a special agent for the U.S. Secret Service.

Lamb’s goal for education spending is to dedicate at least 65 percent of budgets to schools and teacher salaries rather than administrative costs, but his platform doesn’t make clear specifically which areas of administration he would cut.

He did not support the bill signed by Gov. Fallin to increase teacher salaries “because there are other ways to get there,” he told Oklahoma Watch, adding that the overall package earned an “F” for its reform effort.

He also believes in strengthening an old Oklahoma law that, in its original iteration, prevents social promotion in third grade based on reading proficiency. His education platform outlines creating a similar law for third-grade math proficiency.

Stitt is framing himself as a political outsider bolstered by business experience that he said will help him address Oklahoma’s budget. Stitt founded Gateway Mortgage, a national company with offices in 41 states. That wealth has helped finance his campaign, NewsOK reports, with at least $800,000 of his own money spent as of January.

“It’s going to take an outsider to get our state going again,” he said during a March speech at the University of Science and Arts of Oklahoma.

Stitt said during a candidate forum on KOKC radio in April that he would not have signed the bill to increase teacher salaries and education spending, explaining that the funding source — oil — was unsustainable. Instead, his platform seeks to allow districts to use property tax revenue for teacher salaries, revenue that is currently limited to building costs.

His platform also said that he supports raising teacher salaries to match those of neighboring states, and he wants to create temporary $5,000 bonuses to first-time certified Oklahoma teachers to help recruit educators, especially students graduating from Oklahoma colleges.

“We have to restructure some things,” he said at a candidate-voter meet-and-greet in April. “We have to make sure we don’t have bloat at the administration level and get dollars to the classrooms and the teachers’ hands so we can have outcomes that focus on the children.”