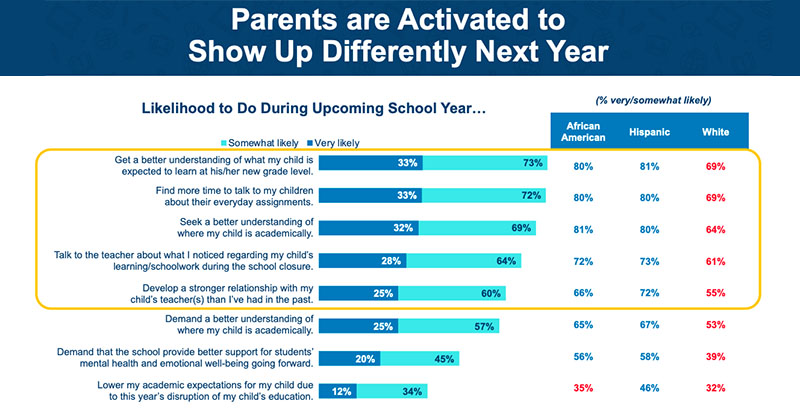 Bibb Hubbard has some advice for educators trying to think through what school — in-person, distanced, remote or blended — might look like next year: “As you’re planning, think about what parents are saying they need.”

Hubbard is founder and president of the national parent-empowerment nonprofit Learning Heroes, which has just released its fifth annual survey of U.S. parents. Its top-line takeaway: The information vacuum that has fed a long-standing and profound gap between parents’ perceptions of their children’s academic performance and how they are actually doing is being felt in new and damaging ways in this age of remote learning.

Specifically, the poll identified big disconnects between the support families are getting from schools during pandemic-related shutdowns and the relationship that parents value. Parents want more one-on-one communication from teachers about their child’s schoolwork, as well as a better understanding of what they are supposed to be learning.

The pandemic-related survey questions are new this year but relate to Learning Heroes’ central concern, which is equipping parents to support their children in schools.

“The theme for me is, it’s really about the personal,” says Hubbard. “If you look at the resources that are the most important to [parents], they’re the personal ones.”

The results jibe with findings in a separate survey conducted by the National Parents Union, which found that two-thirds of families want an individual learning plan for every child, based on assessments, for making up lost learning, as well as mental health evaluations and support. The second poll found that parents are much more likely to trust public-health officials than elected ones and overwhelmingly favor stringent safety protocols when schools do reopen.

Of the more than 3,600 parents surveyed by Learning Heroes between April 14 and May 6, just 15 percent say they have gotten personal guidance on how to support their child’s learning at home, while nearly half said such guidance would be “extremely helpful.” Similarly, 44 percent prize remote one-on-one time or tutoring from a teacher, while only 13 percent have received it.

Parents said texts, phone calls and emails were the most effective methods of communication for them — much more than online portals or school websites. Yet few are receiving these types of communications. 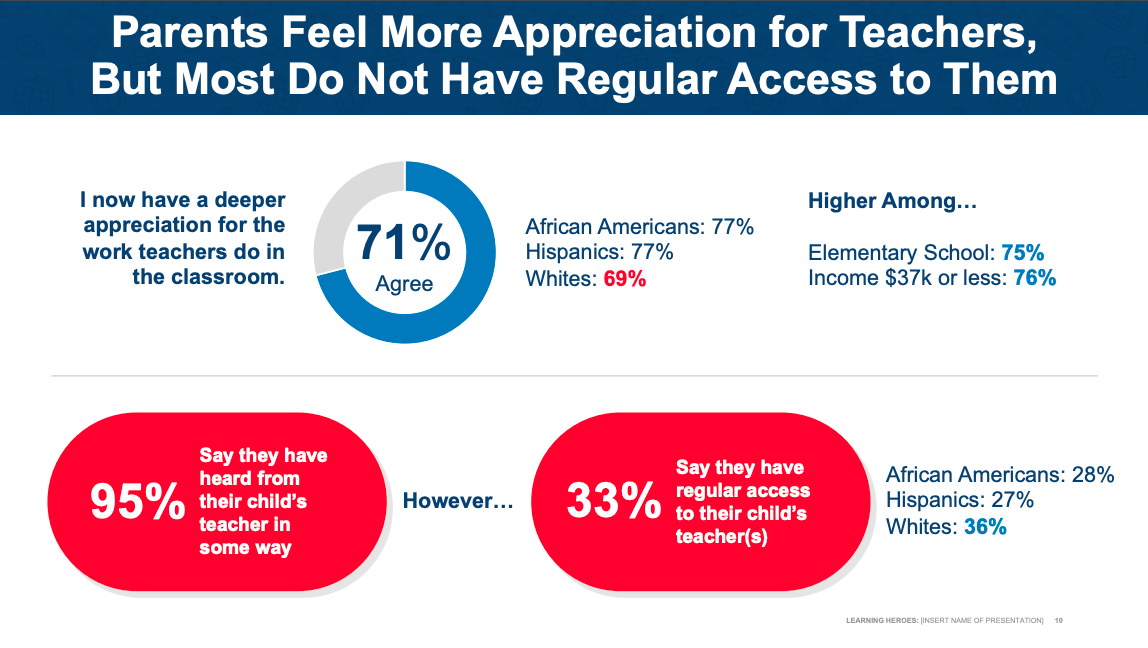 Families are aware of the strain pandemic-related closures have put on teachers and schools and are giving everyone the benefit of the doubt, Hubbard says. Parents are worried, according to the poll, but 75 percent are hopeful and almost as many are grateful.

“There’s a lot of grace right now,” she says. “But I think that’s going to change next fall.”

As in years past, Learning Heroes found that parents overwhelmingly believe their children are reading and performing math at or above grade level, while assessment data reveal that a little more than a third are actually proficient. Ninety-two percent believe their children are at grade level in math and 93 percent in reading, and 83 percent say their kids are receiving “mostly B’s” or better.

Parents, says Hubbard, don’t understand that good grades typically reflect a teacher’s perception of student effort, participation, behavior and other nonacademic factors and don’t necessarily mean a child is on track. “We know why parents aren’t storming the barricades,” she says. “They’re assuming no news is good news.”

The lack of personal communications parents report during this year’s school closures, Hubbard continues, exacerbates an ongoing lack of family engagement that she believes is a chief reason for the discrepancy between parents’ perceptions and the data. “It’s because there are very [few] ways to engage with teachers on an ongoing basis,” she says. “I think it’s really telling why parents have this misunderstanding.” 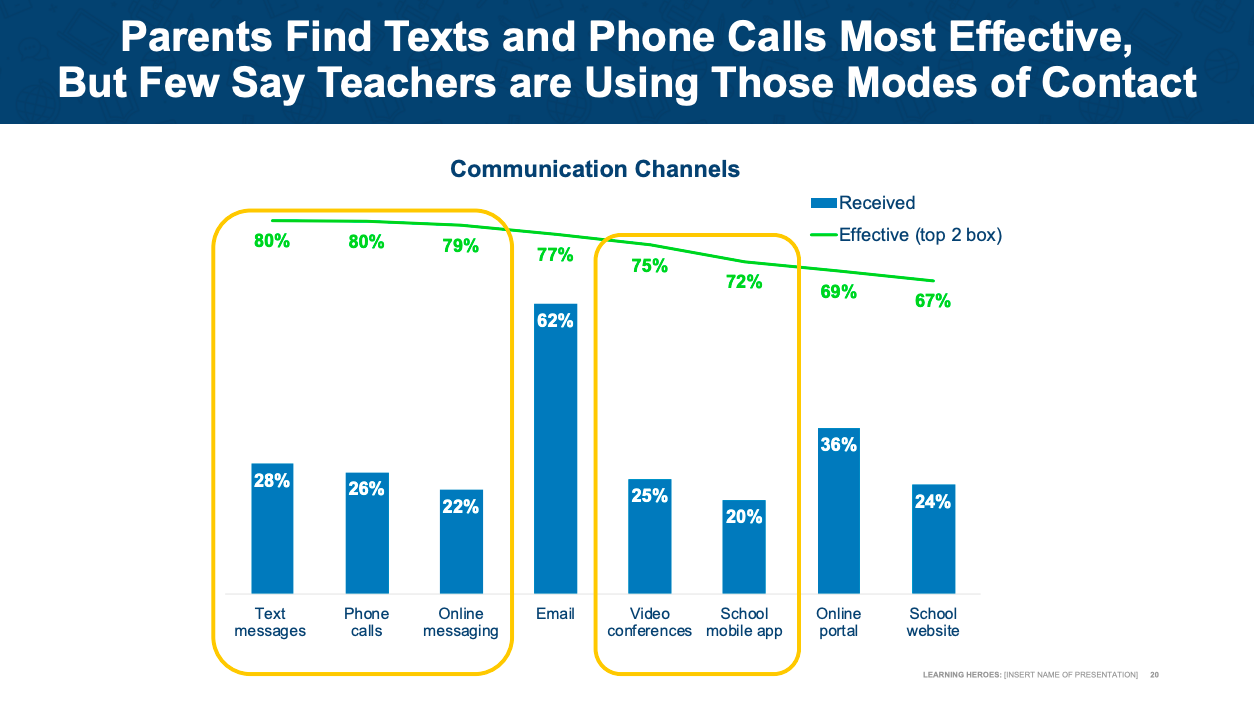 Some 90 percent of parents report using materials supplied by their child’s school, versus resources they found themselves, though only 38 percent have access to video lessons and 36 percent to digital materials from their school. Only 26 percent have printed materials or some form of live remote lessons.

Two-thirds of parents say they are more connected to their child’s education, and 70 percent want to know what material their child is missing at the end of the current school year and how their school will make that learning up. Concern is significantly higher among parents of color and low-income parents, who were overrepresented by the surveyors.

“The broad perception from families is that it’s the end of the school year, so we’ll just gut it out,” says Hubbard. “But next fall, it better be different.”

The National Parents Union found that 81 percent of those surveyed believe that students and staff who may have been exposed to someone who has tested positive for COVID-19 should be required to stay home for 14 days; 79 percent want schools to notify parents of possible exposure; 70 percent want face masks, and 76 percent want schools to provide online learning technology at the start of the year, in case new closures occur.

While Learning Heroes did not ask about student and teacher safety, Hubbard says that as schools and districts strategize about reopening, they would be wise to heed feedback about what families value.

“As you are planning, think about what parents are saying they need,” she says. “I’m super-optimistic about what this moment could allow for.”

Disclosure: The Bill and Melinda Gates Foundation, Charles and Lynn Schusterman Foundation, Bloomberg Philanthropies and the Carnegie Corporation of New York provide financial support to Learning Heroes and The 74.