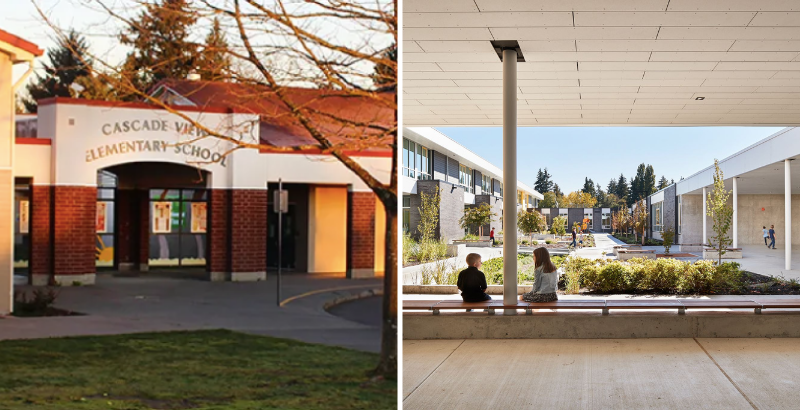 Tukwila, Washington is a working-class suburb just south of Seattle where three-quarters of young people in the city’s schools are low-income and about two-thirds are Black, Hispanic, Asian or multi-racial. Most families rent apartments rather than own homes.

Two months into the school year, the 2,800-student district is seeking an extra cafeteria worker, two additional bus drivers and four paraeducators — meaning the school system is operating at about 7 percent below capacity for those roles. Periodically, district administrators have had to fill in as substitute teachers and the transportation director, normally a desk position, has been forced to drive bus routes.

“The impact of a staffing shortage feels more severe this year than it has in the past,” Tukwila Human Resources Director Aaron Draganov told The 74, noting that the district recently saw an “unusually high number of retirements,” especially in transportation.

But just a few miles to the northeast, on Mercer Island, the story is completely different.

Located between Seattle and Bellevue in a community that is home to a Microsoft co-founder and numerous retired pro athletes, and where typical home values land around $2 million, according to Zillow, Mercer Island School District has largely avoided such staffing woes.

“We are not experiencing the same struggles as other districts,” Executive Director of Human Resources Erin Battersby told The 74. Over 98 percent of support staff roles in the 4,500-student district are filled, according to data she provided.

“If you want to talk about staff shortages, we’re probably not the district to talk to, because we’re doing pretty well,” the HR director said.

The contrasting circumstances in the two school systems represent a fissure in staffing patterns well beyond the Seattle area.

During a school year marked by fears of K-12 labor shortages — with nationwide reports of principals driving bus routes, superintendents filling in as substitute teachers and school cafeterias forgoing hot meals due to a lack of workers — a new analysis out of Washington state quantifies the depth of disparities in teacher and staff vacancy rates between high- and low-poverty school systems.

The research, published Nov. 9 as a working paper by the Center for Education Data and Research, combed through the job postings listed in three-quarters of Washington school districts, which account for 98 percent of all students in the state.

Poorer districts were in need of paraeducators and transportation workers at roughly twice and three times the rates, respectively, of their more affluent counterparts, the analysis revealed. They were also seeking a higher share of janitors, nurses, special educators and teachers for English language learners, among other roles — posing yet another setback for the very students most in need of catching up on learning missed during the pandemic.

“The shortages are breaking along existing lines of disparity,” Dan Goldhaber, a University of Washington education economist who co-authored the analysis, told The 74.

The data flush out an emerging nationwide picture of school staffing that previously included little systematic accounting of districts’ on-the-ground conditions, instead relying on local anecdotes and high-level numbers from the U.S. Bureau of Labor Statistics.

“Having the Washington data is absolutely important to understand which types of workers districts are struggling to hire the most,” said Chad Aldeman, policy director of Georgetown University’s Edunomics Lab and a leading voice in critiquing coverage and public perception of school staffing shortages.

Teachers for special education and English learning programs were the most sought-after instructional roles, while districts reported that they most needed teacher assistants and athletic coaches as support staff.

Before the pandemic, public K-12 education employed about 8 million workers, according to federal data, but that number fell to a low of 7.3 million during the first half of the 2020-21 school year. The count has since rebounded to about 7.7 million, but the sector has yet to fully make up its pandemic losses.

Last year, schools that went remote often didn’t need as many bus drivers, janitors or other support roles, explained Aldeman. Now as districts bring those roles back, they have to compete with mega-employers, such as Amazon and Uber.

This is a “very competitive hiring season,” he said. “It’s definitely an applicant’s market in the sense of, they can be kind of choosy in where they want to go.”

Some of the nation’s largest districts reported hundreds of unfilled positions as of late October. Palm Beach County Schools told The 74 that they had 1,044 vacancies, including for 351 teachers. Hillsborough County Public Schools, which includes Tampa Bay, reported 1,274 openings, 432 of which were teaching roles. And Chicago Public Schools said it was still hiring for over 3,400 staff, including 680 teachers.

More affluent districts may have an easier time filling positions because salaries are generally higher and the work is seen as less stressful. But the reasons explaining those vacancies remain blurry. With a huge federal windfall landing on districts’ doorsteps thanks to $122 billion for schools in the American Rescue Plan passed in March, many districts are hiring for new positions that never previously existed in efforts to lower class sizes.

“We don’t have a good sense of the cause of the job openings,” said Aldeman. “Is it because the high-poverty districts can’t find people, or is it that they’re able to hire more right now?”

Regardless, the disparities in vacancy rates worry Tequilla Brownie, executive vice president of The New Teacher Project. She knows that when under-resourced schools have high shares of empty positions, it can translate into long-lasting instructional deficits for poor students.

Research from her organization found that, in Arkansas, where teachers are in short supply statewide, students in high-poverty districts were more likely to be taught by uncertified teachers. Black students were five times more likely than white students to attend school in a high-shortage district.

Vacancies have been “overwhelmingly felt” by Black and brown students, she told The 74. Now, with shortages continuing to fall along lines of race and class, she fears “kids will not get access to the learning acceleration and the learning recovery that they need because you don’t have enough effective teachers.”

Some districts, however, appear to have broken the mold. In Dallas, teachers receive extra compensation — sometimes netting over $100,000 per year — to work in high-poverty schools. The incentive seems to have helped keep educators around: The district estimates just a 17 percent turnover rate from this past year, down from as high as 23 percent in 2015 (though the most recent figure is a slight bump above its 14 percent rate in 2020).

“We have highly successful teachers who have proven they can be successful at a lot of [high-needs] schools,” Dallas Superintendent Michael Hinojosa told The 74. “That has definitely insulated us in comparison to other major urban districts.”

Dallas Hits on Successful School Turnaround Model With ACE, but It Comes at a Steep Price. Could a Wider Expansion Across Texas Now Be Its Best Bet to Survive?

Rural districts, too, have seen shortages — sometimes more acutely than urban schools. Data from the study out of Washington show rural school systems had higher vacancy rates for special educators than suburban or urban districts, while urban districts had a greater need for science and math teachers. Bus driver, paraeducator and athletic worker shortages were much steeper in rural schools than other districts.

Schools looking to lure high-quality educators, perhaps mimicking the compensation scheme in Dallas, should budget carefully for the long term, advised Aldeman. Extra cash from relief dollars is available now, but it won’t be around forever.

“Thanks to the infusion of federal funds, districts may be tempted to increase base salaries,” he said. “But that short-term thinking could lead to layoffs or other painful decisions when the federal funds run out in a few short years.”

Another strategy for districts to help bolster their teacher corps may revolve around the staff already within the school building, said Brownie. These workers, such as paraprofessionals, who also tend to better represent the diversity of schools’ student bodies than credentialed teachers, can be helped to acquire the skills and training needed to move into full-time instructor roles.

“There definitely are ways that districts, and maybe in partnership with higher ed institutions, could think more innovatively about trying to help those teachers fast-track to get trained and then be placed into classrooms,” she said.

A report published in March by the RAND Corporation found that nearly half of all Black teachers said they planned to leave their jobs at the end of last school year — threatening to further widen diversity gaps in school staffing. Currently, about 4 in 5 educators nationwide are white, compared to less than half of all public school students.  Though this year’s data on teacher turnover are not yet available, the RAND finding underscores the need for schools to consider tactics, such as those suggested by Brownie, to diversify their teaching force.

When schools are short on staff, it’s the families and teachers who feel the effects, said Annette Anderson, deputy director of the Johns Hopkins University Center for Safe and Healthy Schools.

The K-12 expert is also a mother of three students in the Baltimore City Public School system and, recently, around the dinner table, her eighth-grade daughter reported that her sixth-grade cousin had been in her class that day. The youngsters’ cohorts had been merged due to lack of staff.

“That’s a concern for me, because that means my daughter is not getting the level of instruction that she should in her classroom,” the Baltimore mother told The 74.

“It’s not the teacher’s fault that took off,” Anderson continued. She empathizes as a former classroom teacher and principal. “It’s not the fault of the administrator, who’s trying to figure it out in the zero hour.”

“That’s a process and a policy issue,” she said.