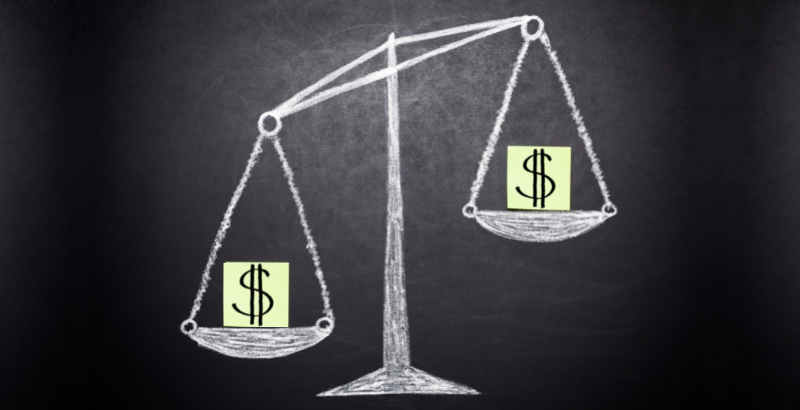 Thanks to a surprisingly strong state budget and a $15 billion infusion courtesy of the federal government, school districts across California are now flush with cash. But if district leaders aren’t careful now, they could trigger a round of painful cuts in the very near future.

Consider the case of San Diego Unified (SDU). Student enrollment has been declining for years, and it suffered a particularly large drop in the midst of the COVID-19 pandemic. In December, the district warned of long-term budget deficits and, as one cost-cutting measure, spent millions on early retirement buyouts for highly-paid veteran employees.

One contributing factor to SDU’s budget crunch was its history of awarding out-sized raises to teachers. Next year, for example, a ten-year veteran in the district will earn $33,000 more than when she started out. That’s an 85% increase over ten years, in a period when inflation rose only 17%.

The latest infusion of state and federal relief dollars have bought the district a temporary reprieve. But rather than using the opportunity to re-evaluate its past decisions, the district is making big new commitments that could bring more financial troubles down the road. Last month it announced plans to hire more full-time workers and again boost teacher salaries.

The pay increase makes for a particularly abrupt swing once you consider how it will affect individual workers. News reports have framed it as a “4 percent raise for educators,” but that doesn’t do it justice. Most SDU teachers will actually get 7-8% raises next year.

Take a beginning teacher who was new to the district last fall. She earned the minimum annual salary of $48,792. If she returns next year, she’ll get the 4% raise and also advance a “step” along the new schedule and be paid as a second-year teacher earning $52,648. That’s a raise of $4,007, or an increase of 7.9%. Similarly, a 10-year veteran with a Master’s degree will get a raise of $5,557 by collecting both the 4% raise and the step increment, an increase of 7.8% year-over-year.

There’s more. Teachers can boost their pay even further if they enhance their academic credentials. While researchers have found no difference in effectiveness between teachers with only a bachelor’s versus those with a Master’s degree, in San Diego, a teacher with only a bachelor’s degree tops out at $80,000, whereas a teacher with more college credits can earn up to $105,000.

In addition to the pay increases, SDU is also making an abrupt turn on staffing. Back in December, when the district was looking to cut its higher-paid veterans, it paid 370 employees up to $15,000 to leave mid-year. Six months later, the district’s latest agreement with the union calls for hiring more of the same types of employees—teachers, nurses, and counselors—that were paid to walk away just a few months ago.

Of course, SDU is by no means unique in facing pressure to boost salaries and hire more full-time staff. But using temporary funds to hire more workers and raise base salaries across the board will ultimately worsen the district’s long-term financial problems.

There are other ways to both raise pay and build capacity that don’t set up districts for financial stress down the road.

In contrast to SDU, some California districts are offering one-time, flat-dollar bonuses that don’t affect base pay. Those are more in line with the temporary nature of the federal infusion, and they don’t disproportionately drive money on the basis of seniority.

Some districts are going even further by using their state and federal windfalls to more directly address specific recruitment and retention challenges. Dallas ISD is offering a $4,000 signing bonus to bilingual teachers, and Detroit Public Schools is offering $15,000 bonuses to special education teachers. To combat higher turnover among junior teachers, Jackson Public Schools in Michigan is offering an incentive package worth $10,000 to cover moving expenses plus retention bonuses after one, two, and three years in the district.

Some are tying pay to other district priorities. Guilford County Schools in North Carolina is offering $20,000 to recruit highly effective teachers who agree to teach in the district’s highest-needs schools for three years. And Austin ISD made a 2% bonus contingent on whether the district meets its student enrollment target or not.

Next to these initiatives, San Diego Unified’s recent agreement looks like a lost opportunity. Rather than using its windfall to tackle persistent challenges, it has added to its long-term financial commitments. And when the federal money runs out, will it have the operating funds to pay for all the new employees it’s planning to hire?

That will depend on what comes next. But by adding more full-time employees and giving existing staff large base raises tied only to seniority and master’s degrees, SDU increased its chances of another abrupt budget reversal in the years to come.