Kerr: As a Teacher, I Know That Working With Students, Not Punishing Them, Is the Best Way to Manage a School. My Colleagues Agree 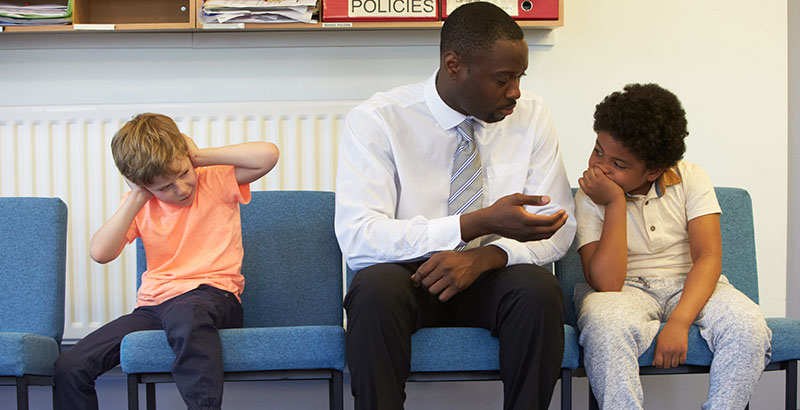 Numbers don’t lie. I learned this in the 16 years I spent in investment banking and the next 16 I spent analyzing my students’ data as a fourth-grade teacher.

But while I believe numbers, I don’t always have faith in the people who use them. A recent Fordham Institute survey of teachers shows how people can unintentionally misuse numbers to advance their ideology. Using questions and data that show that teachers are concerned about student discipline policies, the report claims that educators — particularly black educators — want students to be suspended more often.

This is not true. Teachers believe nonpunitive discipline is most effective for managing behavior and teaching students. We just need the support to make it work.

Teachers know that suspensions often do more harm than good. Most of my students are struggling with terrible challenges that arise from living in poverty. They come to school deeply disappointed that their father who promised to visit never showed, or exhausted after having to move from one shelter to another. As children deal with problems that break adults, their frustration manifests itself in misbehavior.

Suspending students, rather than addressing the root cause of their behavior, sends the message that they are not welcome in their classroom and further exacerbates their problems.

Suspensions particularly harm students of color, who make up the majority of the children I teach. In fact, the report all but ignores the biggest finding: that black teachers see bias where white teachers don’t.

According to the report, 77 percent of black teachers believe that an African-American student would receive a harsher consequence than a white student who committed the same infraction, compared with only 24 percent of white teachers. It is this implicit bias that causes suspensions to disproportionately affect black students, denying them a day of learning instead of allowing them to learn from their mistakes.

It’s alternatives to suspensions that focus on addressing the cause of misbehavior through leveraging relationships that lead to lasting change, all while holding students accountable.

I am not alone in this preference for nonpunitive interventions. The numbers — the teachers — are on my side. Last year, Educators for Excellence conducted a nationwide survey of more than 1,000 teachers and directly asked what the most effective discipline strategies are. The survey found that teachers across the country prefer nonpunitive discipline over suspensions, saying that positive behavior reinforcement (74 percent) and restorative practices (64 percent) are most effective in improving student behavior. There was even stronger support among black teachers. And far fewer respondents chose exclusionary measures such as out-of-school suspensions (39 percent) and expulsions (39 percent).

One fourth-grader, whom I’ll call Sam to protect his identity, shows how working with students instead of against them can change their behavior — and their trajectory.

Not only would Sam come to school every morning without his homework, he would get in fights with kids over cheating in Foursquare and disrupt class with frequent outbursts. My school punished him for every infraction, which only seemed to make the problem worse. It wasn’t until I talked to Sam that I discovered he was deflecting for not doing his homework — homework he lied to his parents about because he didn’t have time to complete it between school and hockey practice.

With a little help, Sam came up with his own solution. I would give him his homework when he first arrived, so he could get it started during class breaks. Soon, not only did he have his homework every day, but the disruptions stopped.

So, what can we do? Until recently, the U.S. Department of Education provided guidance to help schools and districts manage discipline without discriminating and move away from suspensions. The rescission of this guidance has left a leadership vacuum that enables education advocacy groups like Fordham to push for exclusionary discipline policies. We need to push back and call on our state and district leaders to adopt local versions of this guidance.

Do it for your Sam.

Claudette Kerr has taught fourth grade for 16 years at Josiah Quincy Elementary School in Boston and is a member of Educators for Excellence–Boston.

Claudette Kerr has taught fourth grade for 16 years at Josiah Quincy Elementary School in Boston and is a member of Educators for Excellence-Boston.