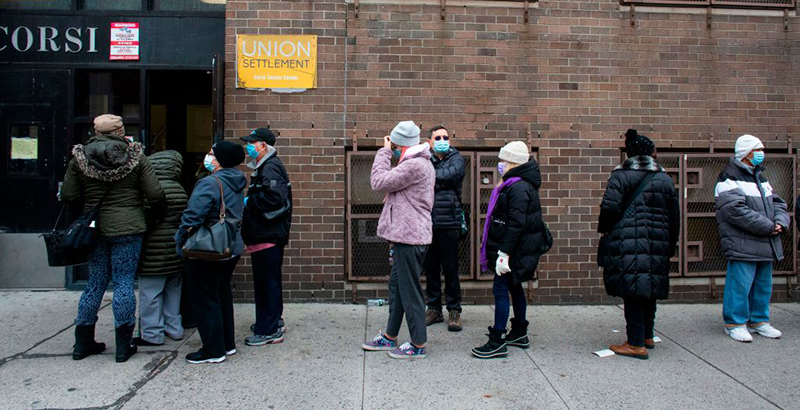 New Yorkers wait in line for their COVID-19 shots at a vaccination site in Harlem. (Kena Betancur / Getty Images)

Some 20,000 New York city teachers and educators have sought the coronavirus vaccine through their union. While that’s a nearly 18 percent increase over the figure released earlier this month, the city’s vaccine supply is running short.

“I don’t have a doubt in my mind,” the mayor said on MSNBC’s Morning Joe. “… No question in my mind, we’re coming back strong in September in-person.”

But the mayor’s confidence in what could happen eight months from now doesn’t align with what New Yorkers are seeing on the ground, where vaccine supply has temporarily dried up. And while Mulgrew told The 74 he’s been asking the administration to release the number of school-based staff that have received their first dose of the vaccine, City Hall has yet to provide that number.

Teachers have been signing up to get the vaccine through the state, the city, and the UFT itself, which is the only teachers union nationally to arrange its own program to deliver the shot to its members.

Since Jan. 11, about 10,000 UFT members have been matched with medical providers through the union’s vaccine program, Mulgrew said. Of those, approximately 5,000 have received their first shots, and Mulgrew estimates that several thousand teachers are among the 23,000 city residents whose previously scheduled appointments were canceled.

“When thousands of appointments are canceled, it doesn’t create a lot of good will,” he said. “…The thing that’s most affecting [school staff] right now is fear and anxiety. We can’t wipe away what happened in March, April and May … [Teachers] felt completely betrayed by the mayor and by his administration.”

Clarity around vaccination numbers is key in restoring some of that lost faith, Mulgrew said. “[Teachers] really just want to make sure that people are transparent and straight with them, and they’re getting the right information,” he added. “You have to have complete, utter transparency with this, in order to help start building confidence.”

The city had been distributing the vaccine to members of the 1B prioritization group, which includes pre-K-12 school staff, as well as teachers at colleges and child care centers, when a holdup at the federal level caused local supplies to dwindle.

“Due to supply shortages, the City has been forced to reschedule thousands of appointments,” mayoral spokeswoman Avery Cohen wrote in an email. “This, unfortunately, affects people across different eligible groups. The Mayor speaks about this publicly every day. We desperately want more supply to be able to vaccinate the people of our city.”

Cohen said the mayor has prioritized the health and safety of school staff and the system’s 1.1 million students “at every stage of the pandemic.”

“We’re the only city in the country that has hundreds of thousands of students and staff reporting in person each day. Our rigorous safety measures — including our testing program — are held up as a model for reopening schools. We pushed to include our teachers and school workers in 1B, and we’ll continue to do all we can to make sure they get vaccinated.”

Indeed, NYC schools are ahead of most of the nation’s other major urban districts, including Chicago, which was forced to cancel Wednesday’s return to in-person classes for pre-kindergarteners and special education students after teachers defied a district order to report to schools, according to Chalkbeat. In Los Angeles, where cases continue to surge and reopening has been pushed back multiple times, the superintendent and the teachers union said this week that in-person learning can’t happen until teachers are vaccinated.

Meanwhile, CDC researchers published a report on Tuesday in the medical journal JAMA, explaining that available evidence shows school reopening can be done safely, as long as appropriate steps are taken to mitigate community spread in settings like gyms and restaurants. The piece also highlighted the now widely recognized toll that remote learning has taken on many children, particularly those in low-income communities.

In New York, the city’s youngest students and those with profound learning disabilities returned to hybrid learning after the holidays, while middle and high schoolers were told they would remain in fully remote learning. That change also came with stricter testing protocols: 20 percent of each open school’s population is supposed to be getting tested each week. Although the testing has surfaced relatively low rates, critics have noted that the numbers don’t include children getting tested outside of school.

As of Tuesday evening, 53 buildings were undergoing either 24-hour or extended closures due to potential COVID exposures.

Both Mulgrew and de Blasio have expressed confidence in the Biden administration’s ability to expedite vaccine supplies for New York. But whether or not the city can actually get all students back into buildings by September will depend, the union leader said, on its vaccination program’s performance.

While the mayor has said he’d like to reopen middle schools “soon,” followed by high schools, he has yet to present the public with a timeline. Before that happens, Mulgrew added, he’d like to see the city increase its testing capacity — a feat that will need to be balanced with vaccine deployment efforts, including at a number of closed school buildings that have been set up as distribution sites.