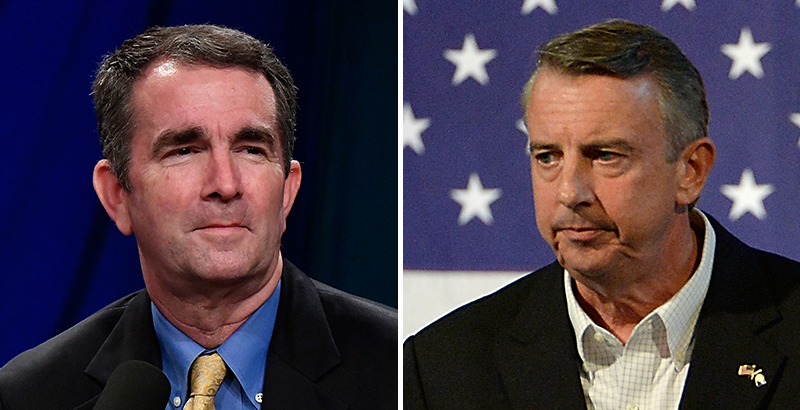 All politics is local — except, maybe, when it involves Donald Trump and Betsy DeVos.

The polarizing president and his deeply unpopular education secretary, and the positions they’ve advocated, have become central issues in the race for Virginia governor.

Neither Trump nor DeVos, of course, will be on the ballot Nov. 7. Democratic Lt. Gov. Ralph Northam, an Army veteran and pediatric neurologist, faces Ed Gillespie, a lobbyist and Republican politico. The current governor, Terry McAuliffe, a Democrat, is term-limited; Virginia governors serve just one term. Anne Holton, the wife of Virginia senator and former vice presidential candidate Tim Kaine, served as state secretary of education under McAuliffe and is now on the state’s board of education.

Marquee names like Barack Obama and Marco Rubio have stumped for the candidates in perhaps the most-watched contest in this off-year election cycle, and the race is relatively close. One recent poll put Gillespie up by eight points, though as of Oct. 27, Northam is up about 4 points on average, according to Real Clear Politics.

Education, particularly as viewed through the prism of the Trump administration, has been a theme throughout the campaign.

Gillespie from the beginning has been in a tough position regarding how much to ally with Trump, who lost Virginia last year but who could help boost GOP turnout in a non-presidential year. Teachers unions and Democrats starting this summer worked to tie him to Trump — and DeVos.

“There is clearly a direct line from the harmful education ideas of Donald Trump and Betsy DeVos to Ed Gillespie. The last thing that Virginia students need is for more money to be siphoned away from public schools and given to private interests,” Virginia Education Association President Jim Livingston said in August.

Gillespie has received over $100,000 in campaign contributions from members of the DeVos family, though none from Betsy DeVos herself, according to The Washington Post, which cited data from the nonprofit Virginia Public Access Project. The DeVos family have been longtime Republican donors, an issue raised during DeVos’s contentious confirmation process.

The VEA also ran an ad saying Gillespie “supports Donald Trump’s plan to take money out of Virginia public schools and give it to private schools” and that his proposed tax cuts could reduce funding for schools.

Gillespie’s education policy positions do, in many ways, mirror DeVos’s. He says, for example, that “a ‘one size fits all’ system will no longer work in Virginia.”

He’s called for a choice-centric system, including innovation school districts, more charter schools, a statewide virtual school, and an expanded tax-credit scholarship program that allows third-party contributions to fund private school tuition in exchange for a tax break. He advocates allowing homeschooled children to participate in public school supports and dual credit courses without extra fees, and for the creation of an education savings account program. In states that have ESAs, parents of some students, often those with special needs, can use a student’s public school funding for private school, homeschool curriculum, tuition, or other education expenses; Gillespie’s plan says he’ll work with legislators on specifics.

Northam is also opposed to education savings accounts; the legislature passed a law authorizing them earlier this year, which McAuliffe vetoed. Americans for Prosperity, the political advocacy group started by the Koch brothers, launched an ad criticizing Northam for his opposition.

Charter advocates, including Chris Braunlich, a former member of the state’s board of education, have praised Gillespie’s advocacy of charters, particularly the benefit they could bring for children in failing schools.

School standards and accountability have also become an issue. Virginia never adopted the Common Core, and policymakers have recently changed the state’s Standards of Learning, by reducing the number of tests children take.

The Washington Post editorial board, which has supported education reform, dinged Northam for saying he’d toss the Standards of Learning while arguing that not all students should be given the same test, given that they come from different backgrounds.

“Creating different expectations for children does them no favors; it just allows adults to escape responsibility,”the Post’s editorial board wrote.

Gillespie issued a press release criticizing Northam for his comments, and said both achievement and growth should be celebrated; earlier in the year he made a video in which he answered questions from the test read to him by children.

Virginia students’ scores on three of the four national benchmark NAEP tests were above average, and the other was on par with the U.S. average. The high school graduation rate in 2014–15 was 86 percent, above the national average of 83 percent the same year. The gap between graduation rates for black and white students was smaller than the national average, but the gap between Hispanic and white students was larger than the rest of the country.

Given the focus on the Trump-DeVos orbit and their policies, other issues have gone unexplored, education experts in the state said.

The candidates haven’t addressed racial tensions that have cropped up in schools, like the Snapchat video of white students at a suburban Richmond middle school pretending to rape black classmates and using racial slurs, said Ravi Perry, chair of the political science department at Virginia Commonwealth University.

Even in the wake of racially charged protests in Charlottesville this summer that left one 32-year-old Virginia woman dead, the issue has fallen by the wayside, he said.

“It’s bothersome to me that those types of issues have not generated the level of attention that’s required,” he said.

Gillespie’s education plan says he’ll cut the achievement gap in half in 10 years, and Northam pledges to fight for strong public schools regardless of ZIP code. Both say they’d work on suspension reform; Virginia schools refer the most students to law enforcement for discipline issues of any state in the nation.