‘If You Don’t Tell Your Story, Somebody Else Will’: Sixty-Five Years Later, Brown v. Board Participants Work to Correct the Record 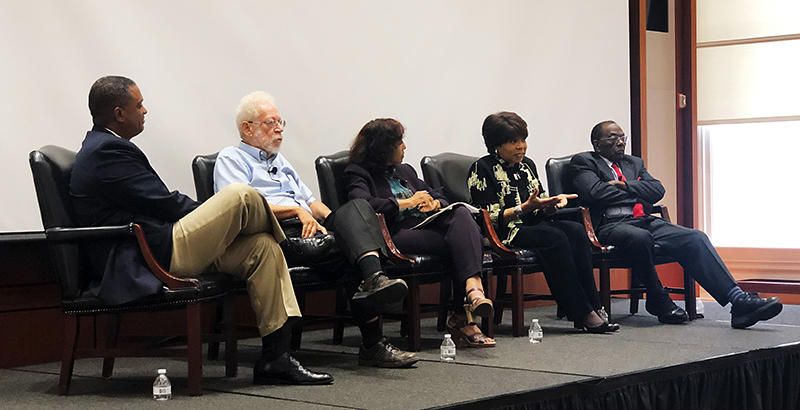 The way the pivotal Brown v. Board of Education school desegregation case is taught and covered is in many ways inaccurate, discounting many people’s contributions and hampering efforts to correct the wrongs highlighted in the case, panelists said at an event Tuesday.

“It’s almost like if you don’t tell your story, somebody else will, and it won’t look anything like your story,” Cheryl Brown Henderson, daughter of lead plaintiff Oliver Brown, said at a panel discussion with advocates and others who also participated in the group of cases that declared “separate but equal” schools to be unconstitutional.

The 74 was a co-sponsor of the event, the first in a nationwide series designed to commemorate the 65th anniversary of the ruling and its unsung plaintiffs.

There are real consequences to this failure to accurately and adequately teach the lessons of Brown, the panelists said.

A “conspiracy of silence” has kept Brown to just five or six sentences in history books, said John Stokes, a plaintiff in a Brown-linked case in Prince Edward County, Virginia. If people were better educated, “then our society would be in a better position to correct these ills,” he said.

Democratic senators in recent years have asked Trump nominees to the federal bench whether the Brown decision was accurately decided, and many have dodged the question, said Alonzo Smith, a history professor.

“We’re in a situation where there’s been this pushback … to say that Brown really maybe was a mistake, maybe the court shouldn’t have ruled against segregation,” said Smith, who grew up in segregated Washington, D.C., and who curated an exhibit on the case’s 50th anniversary for the Smithsonian.

Much of the coverage of the case diminishes the pivotal role of the NAACP and the other plaintiffs, many of whom experienced far more hardship than the Browns, Brown Henderson said.

For instance, when Life magazine sent a photographer to Topeka, Kansas, to cover the case, he took photos of all the plaintiffs, but the photo that ultimately ran was that of Brown’s sister in front of a school, further feeding the false narrative that the case was one family’s crusade, she said.

“What a disservice we’re doing to people who stood with the NAACP to make this monumental change happen, when nobody knows about them,” Brown Henderson said.

Smith, who was consigned to a segregated elementary school so crowded that he and classmates attended in shifts while a white school nearby sat underused, said his research for the Smithsonian shed light on the wide net of black activists in Washington, D.C., who helped bring a school desegregation case linked to Brown. A barber brought that case, helped by the wealthier wives of Howard University faculty.

“One of the things I came to realize very clearly … was the extent to which this was a black community effort,” he said.

And ignoring Stokes’s case in Virginia, for instance, covers up the important role that students played in the cases.

Stokes and others at Moton High School walked out to protest the poor conditions at their school, which was overcrowded, with inadequate materials and a dilapidated building, as compared to the white schools in much better condition. The story of those students occupied a brief moment in the national spotlight during the 2016 vice presidential debate, held at nearby Longwood University.

Beyond the lack of attention granted to the other plaintiffs, some of the misconceptions about the central Brown case and the Brown family are more basic, Brown Henderson said.

Kansas, where the Browns lived, permitted segregated schools only at the elementary level, in cities of more than 15,000 people. Unlike in the other cases, the black schools there were in good condition, with well-qualified teachers, she said.

Her father, Oliver Brown, wasn’t picked as the named plaintiff because he was first alphabetically or the first to sign on. He didn’t take his case directly to Thurgood Marshall, the NAACP attorney and eventual Supreme Court justice who argued the case; in fact, the two never met. Nor was her family the only “complete” nuclear family and therefore more publicly palatable.

In fact, the only notable characteristic of Oliver Brown was that he was the only father among the 13 parents who brought cases on behalf of their children.

“We believe that the gender politics of the day probably played a role in dad’s assignment as lead plaintiff,” Brown Henderson said.