As a pandemic rages, schools across the U.S. have shut down and students are struggling to continue their education at home. In Long Beach, California, a group of high schoolers is among the first to cleverly commandeer a popular piece of technology to regain communication with their teachers.

This being 1919, the pandemic in question is the Spanish flu. And the technology is the telephone. Though Alexander Graham Bell’s invention was more than 40 years old, it was still in the process of changing the world: At the time, only around half of middle-income households had one, according to Claude S. Fischer’s America Calling: A Social History of the Telephone to 1940. The fact that California students were using it as an educational device was so novel that it made the papers.

It did not, however, start an immediate trend of technology-enabled remote education. Actually, many local phone systems were unable to keep up with demand during the Spanish flu and resorted to running ads asking customers to make calls only in emergencies, which might help explain why the Long Beach experiment didn’t spread. The U.S. was spared any comparable national health crisis and widespread school closings until the coronavirus hit more than a century later.

But even in the absence of a pandemic such as the Spanish Flu, many children of the early- to mid-20th century were kept out of schools by illness. We who have benefited from later medical breakthroughs may forget how many grave diseases were everyday realities for our parents and grandparents. Local outbreaks of polio, for example, peaked at almost 58,000 cases in the U.S. in 1952, the year that Jonas Salk led the creation of a vaccine.

Two decades after the Spanish flu outbreak, the phone resurfaced as a tool for distance learning. This time, it had enduring impact.

For years, schools had employed a low-tech approach to teaching housebound kids: They brought the education to them, in the form of in-home visits by traveling teachers. But that was a pricey approach that didn’t scale well. Too few teachers served too many students; in rural areas, just trekking from home to home could eat up much of an instructor’s day. The upshot: Students were lucky to get an hour or two of educational face time a week.

In 1939, Iowa’s Department of Education spearheaded a pilot program involving putting teachers on the phone rather than in a car. It took place in the city of Newton, best known as the longtime home of Maytag appliances. According to a 1955 Saturday Evening Post article by William S. Dutton, two ailing students — Tanya Wrider, a 9-year-old with arthritis, and Betty Jean Carnhan, a 16-year-old recovering from surgery — began attending class via telephone. The setup they used, assembled with help from local phone company volunteers, was the first example of a system that became known as teach-a-phone, school-to-home telephone, or simply the magic box.

Tanya and Betty Jean soon had company. That same year, Dorothy Rose Cave of Marcus, Iowa, contracted osteomyelitis, a rare bone infection that left her bedridden for years. (Only later in the 1940s did doctors discover that it could be successfully treated with penicillin.) A 1942 Sioux City Journal article recounted how the local phone company strung five miles of telephone wire to connect her family’s farm home to the nearest high school. She used her phone not only for studies but also to listen to her classmates’ concerts and basketball games. 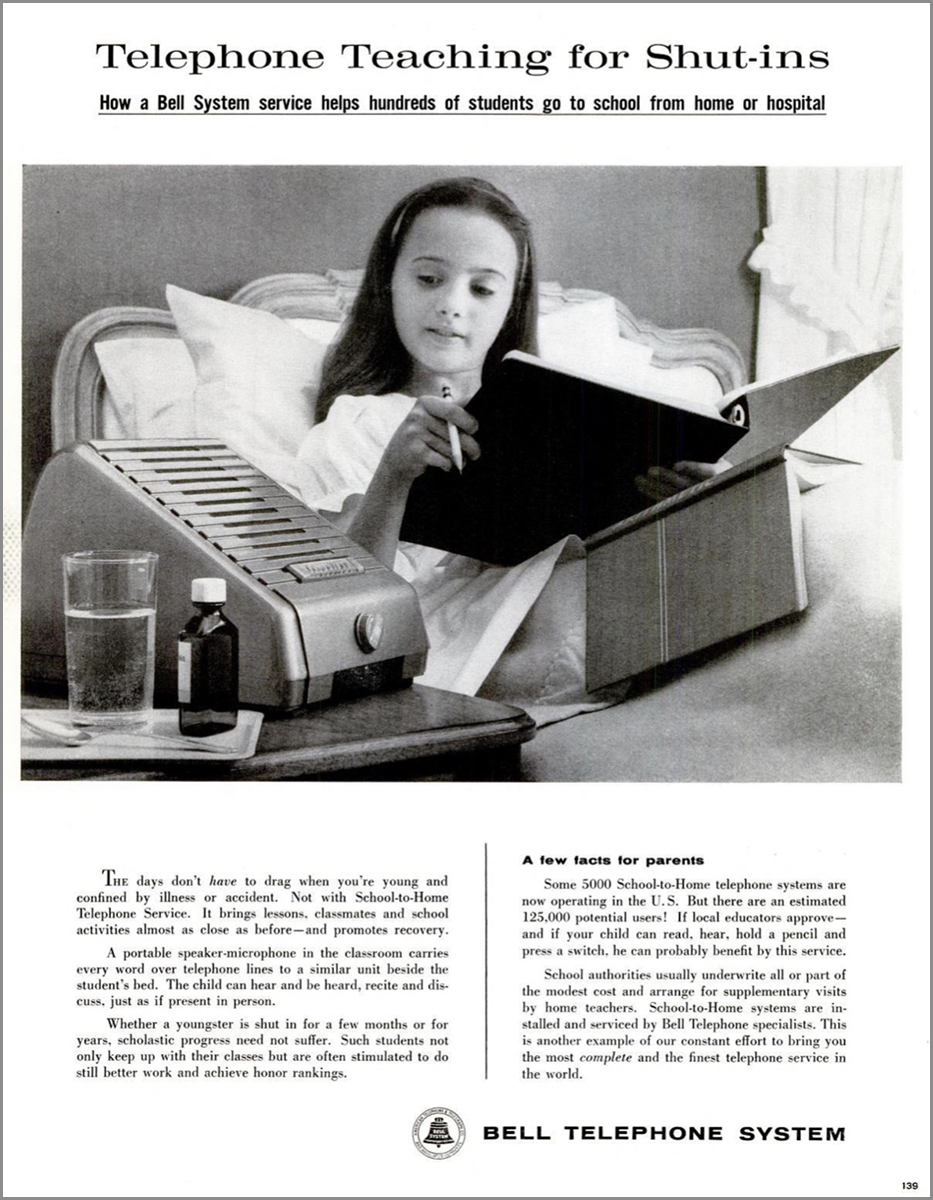 A 1962 ad for the Bell Telephone System’s School-to-Home Telephone Service. Some 5,000 of them were operating that year in the U.S. (Life Magazine)

By 1946, 83 students across Iowa were attending school by phone, and the idea had spread to other states. In 1942, for example, Frank Huettner Jr. of Bloomer, Wisconsin, was paralyzed when the school bus he was in overturned on the way back from a debate. After spending 100 days in the hospital and catching up on his high school studies, he happened upon an article on the teach-a-phone program in Iowa. His parents convinced a local college to install the necessary equipment. Huettner went on to gain a measure of fame as the first person to graduate from college — and then law school — by telephone.

At least 43 states had adopted school-to-home technology by 1953. After approving a student for such a program, they typically covered most or all of the cost of the required phone service — in 1960, it ranged from $13 to $25 a month, or $113 to $218 in 2020 dollars, although organizations such as the Elks and United Cerebral Palsy sometimes helped foot the bill.

Much as schools today have commandeered Zoom — a service originally designed with businesses in mind — the earliest teach-a-phone systems simply repurposed a recently introduced office intercom system called Flash-A-Call. But users found that calls between home and school could be staticky. Moreover, wrote the Saturday Evening Post‘s Dutton, “[a]rithmetic lessons were scrambled occasionally by the voices of housewives phoning in grocery orders.”

Such technical glitches led the Bell System and Executone, a maker of business communications equipment, to build hardware specifically for school-to-home communications. This new gear gave students at home (or, sometimes, in a hospital) a gadget that resembled a tabletop radio, with a switch they could press when they were ready to speak. It connected by special phone line to another device in the classroom that picked up the voices of the teacher and students and broadcast that of the remote child. This in-school box was designed with portability in mind and was typically toted from room to room by volunteer students throughout the school day.

Even then, extraneous noise could be a problem. “Small sounds with high frequencies are amplified, and the snapping of a lead pencil anywhere in the vicinity of the classroom phone reverberates in the Ruffin dining room like a rifle shot,” wrote the Cedar Rapids Gazette‘s Blayne Freeland in a 1948 article about Ned Ruffin, a 16-year-old Iowan with rheumatic fever.

As schools gained experience with teach-a-phone technology, they learned about its strengths and weaknesses. English could be efficiently taught through audio alone; math, which often involved a heavy dose of explanation via blackboard, was harder to translate. Then again, schools were willing to go to lengths to make telephonic education work. In 1948, Iowa’s Ottumwa Daily Courier reported that local student Martha Jean Meier, at home with rheumatoid arthritis, had been provided with her own at-home microscope so she could study biology.

Schools generally ended up restricting school-to-home phone teaching to fourth-graders and above. (Younger kids were believed not to have the necessary attention span — the same issue that every kindergarten teacher tasked with instructing remote 5-year-olds this year has contended with.) In-home teacher visits weren’t rendered obsolete; they turned out to be valuable as a supplemental tool, especially for testing, which was difficult to conduct remotely.

The most important thing about the teach-a-phone was that it was effective. According to a 1961 study, 98 percent of students who used one achieved passing grades, vs. a national average of only 85 percent. The report’s authors concluded that students who phoned into school might have had a deeper interest in their studies and more time to commit to them than their healthier, more carefree classmates.

Just as important, along with the educational value, the system restored some of the peer-group camaraderie that ailing kids lost when they were removed from school. “The feeling of being ‘part of the gang’ is brought into the life of the homebound student by the school-to-home phone,” wrote Family Weekly‘s Norris Millington in 1959. “His room broadens into a whole new world, and contact with this world does not end when school lets out.” An article published the next year about Newkirk, Oklahoma, grade schooler Gene Richards, at home with a kidney disease, noted that he turned on his teach-a-phone a half hour before class started so he could chat with friends about doings at school.

Though the teach-a-phone’s roots were rural, it eventually found use in more densely populated areas. Some big-city school-to-home teaching programs moved beyond patching one housebound kid into a traditional schoolroom: Instead, they conducted classes that were entirely virtual, with every child participating remotely. In 1964, Los Angeles operated 15 tele-teaching centers for this purpose, each of which serviced 15 to 20 students. Teachers used telephones with automatic dialers to reach homes over dedicated one-way phone lines; students participated via speakerphones that rented for about $7.50 a month.

Schools also intermingled telephone study with other distance-learning technologies. In New York City, students listened to radio programs dubbed “the High School of the Air,” then discussed what they’d heard by phone. More intriguingly, a system developed by GTE, called blackboard-by-wire, let a teacher write with an electronic pen on a tablet and have the results transmitted over phone line to remote TV screens. Along with being a potential boon to shut-ins, the tech held the promise to “connect the poorest schoolhouse with brilliant scholars many miles distant,” marveled an AP reporter in 1966. But blackboard-by-wire never found widespread use — like more recent remote-teaching technologies that didn’t live up to their initial hype.

In These Rural Schools, the Computer Science Teachers Are Volunteers Who Work for Microsoft, Amazon and Google. That’s Opening Doors for Their Students

Just on their own, school-to-home systems were so fundamentally useful that they continued into the 1980s and 1990s in much the same form they had taken in earlier decades. In the late 1970s and early 1980s, the technology’s most celebrated user was David Vetter, the Houston “bubble boy” whose severe combined immunodeficiency (SCID) kept him inside a protective room-sized containment system at his family’s home. Equipped with a teach-a-phone, he dialed into classes at a nearby school, providing his life with a rare element of normalcy before his death at age 12 in 1984. 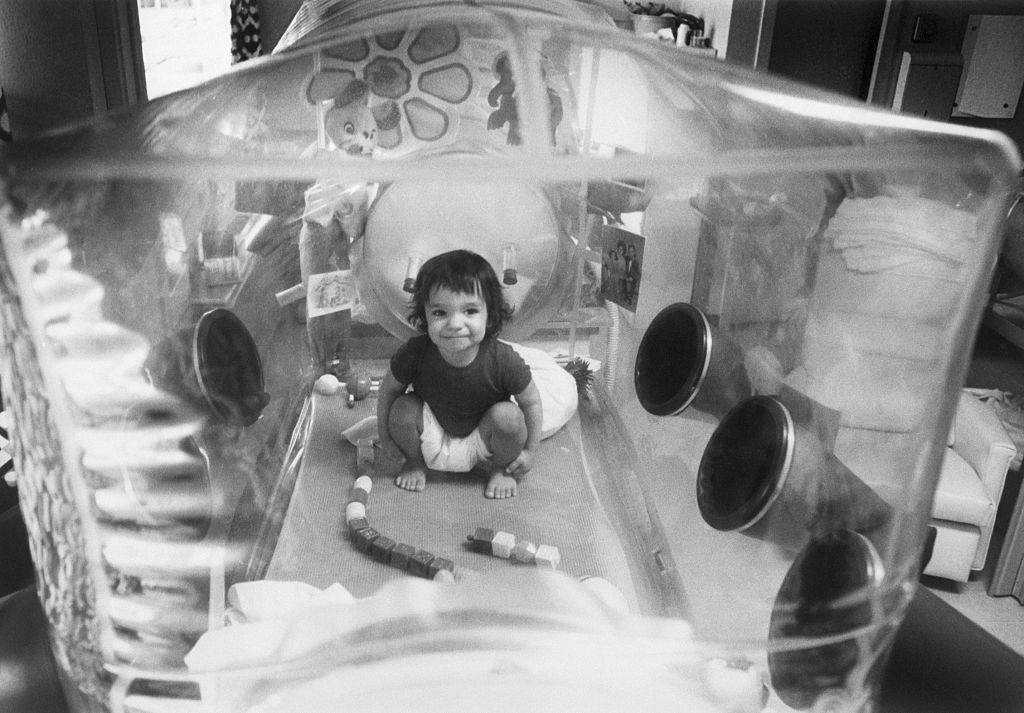 As the 21st century approached, a new technological element finally changed remote learning for good: video. At first, videoconferencing for remote learning involved $18,000 hardware systems and ran over ISDN, an early form of broadband offered at a time when most homes and schools were still on dial-up connections. The Talia Seidman Foundation, founded by the parents of a 7 1/2-year-old girl who had died of brain cancer, emerged to advocate for the technology and cover the cost to bring it to students unable to attend school in person.

Today, services such as Zoom, Microsoft Teams and Google Meet, along with camera-equipped laptops, have made remote video instruction far more accessible while becoming quickly indispensable to the tens of millions of students thrust into remote learning by COVID-19. And there’s still plenty of opportunity to take the idea further. Some schools are already using telepresence robots from companies such as VGo. These remote-controllable wheeled devices, with embedded cameras and video screens, can serve as the eyes and ears of a student who can’t attend in person. Unlike the teach-a-phone boxes of yore, telepresence robots can intermingle with classmates and whir between rooms under their own power. They can even attend choir and go on field trips. 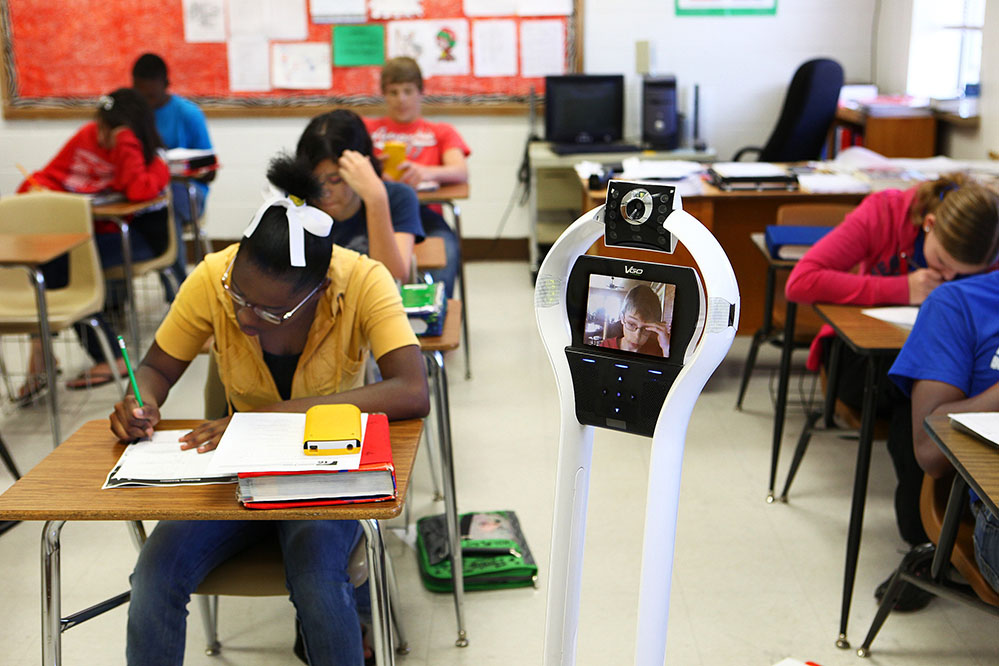 Telepresence robots have the advantage of being able to intermingle with classmates and move from classroom to classroom on their own. (vGo)

For all the ways these bots go far beyond the 20th century’s school-to-home systems, they’re ultimately just video-enabled telephones on wheels. Providing students at home with both education and assimilation, they help kids overcome daunting challenges while alleviating some of the loneliness of a difficult situation. The Iowans who brought us the teach-a-phone more than 80 years ago might regard them as science fiction, but at the same time, they would have a deep appreciation for their purpose and potential.

Lead Image: A 1962 ad for the Bell Telephone System’s School-to-Home Telephone Service. Some 5,000 of them were operating that year in the U.S. (Life Magazine)