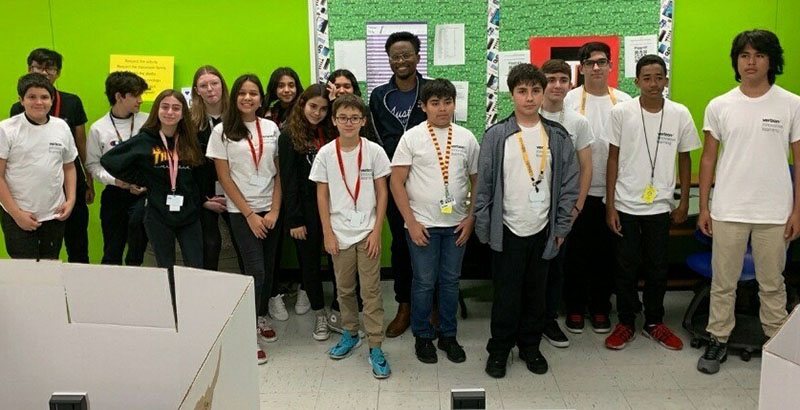 Navigating Microsoft Teams, the Edmodo platform and Zoom chats is a breeze for the 16 eighth-graders at Hammocks Middle School in Miami who form the Hammocks Tech Team. And by sharing their tech savvy, their group has proved to be one of the most valuable resources available for all students and teachers at Hammocks.

Hammocks Middle School, which also contains the Hammocks Academy of Legal Studies magnet, is part of the Miami-Dade County Public Schools, serving grades six, seven and eight. Prior to this school year, Hammocks was named a Verizon Innovation Learning school, meaning the home of the Hurricanes was able to give every teacher and student an iPad to start the school year.

The Tech Team learned the ins and outs of “using the iPad as an extension of education and learning,” says Beatriz Llano-Scherker, the school’s Verizon coach and a teacher. Under Seaman’s direction, the team became fluent in a variety of tech languages, apps and processes.

So when distance learning became mandatory, the team was all set to serve as a 16-member help squad for everyone at Hammocks. They held Zoom tutorials and answered countless questions from both staff and students.

“What is really nice about it,” Seaman says, “is the students became the teachers, and that relationship doesn’t occur between students and teachers. There was a real trust here. We have a lot of tools in our toolbox.”

The students have been using that toolbox plenty during the learn-at-home situation.

“Throughout this pandemic, we have been getting a lot more questions about how this is working,” says eighth-grader Daniel Dezayas. “It has been a lot more work.”

Sophia Glindenman, another Tech Team eighth-grader, says that when they were at school, there weren’t a lot of problems to deal with, but now that everybody is using the school-issued iPads at home, the team has been busy.

Daniel says that being part of the Tech Team has connected him to students throughout the school. Recently, one student was blocked from entering an app she needed for school, and he spent 20 minutes with her remotely trying to find various ways of figuring it out. “It was cool to get to know this person, and eventually we got it and got the iPad fixed,” he says.

In the three weeks before distance learning came to the school, Seaman says, the team worked on what it would look like at Hammocks. The students used varying tools to enable teachers to record lessons and share them, set all teachers up on Edmodo — a network for educators to connect with students remotely — and helped them understand the difference between a live lesson and a recorded lesson.

“We were already versed in distance learning prior to it happening, so we had tools to deploy virtually,” Seaman says.

“We have learned to use Microsoft Teams as a better learning tool to help schedule meetings and help students with any questions they need,” Dezayas says. “With Zoom, we basically did the same thing. We helped with students who had questions, and if they needed to see step-by-step help, we would screen-share.”

Forming a Tech Team was part of the move to the Verizon Innovation Learning setup, which supplied the iPads and offered in-school coaching. Leal says many of the teachers weren’t proficient with iPad use and had no background in mastering the device for classroom learning. “Students were deployed, and the teachers were a little reticent that a child here is going to help,” she says. “Now, the students are invaluable. Teachers call them and want them in their classrooms and know everything they do is to facilitate learning for students.”

“My entire life, I have always loved technology and how it has helped me get things done or have fun,” Daniel says. Sophia says she wanted to be one of the first students in the school to learn to teach technology and has enjoyed people knowing they can come to her for questions.

Janier Sanchez, a Tech Team eighth-grader, says it makes him happy when he can fix something for someone and he gets a thank-you in return. “It is two words,” he says, “but it makes me feel like I am really part of the Tech Team.”