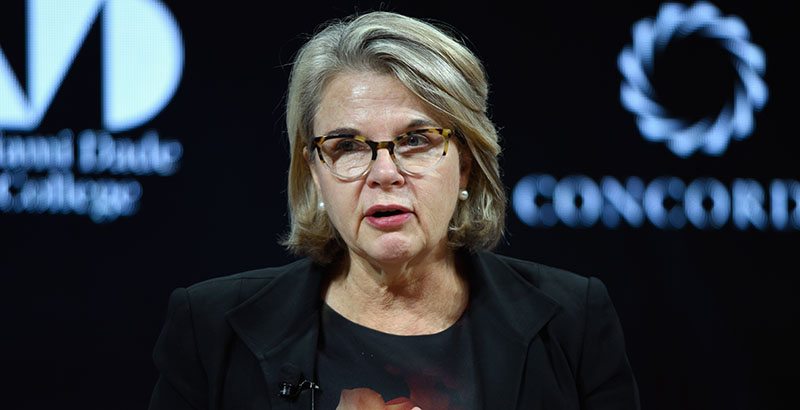 This conversation with former secretary of education Margaret Spellings was produced in partnership with The George W. Bush Institute. A portion of this discussion was pulled from the institute’s podcast The Strategerist. Spellings is now president and CEO of Texas 2036.

You have spent your career in education. Where did your passion for education come from?

I got a lot of it from George W. Bush and from knocking around the state legislature. It doesn’t take you too long to figure out in state government, the action is in education. More than 50 percent of all state budgets, as far as I know, are spent on public K-12 and higher education. And so you have to follow the money, and that’s where the policy is.

The other thing I love about education is, it is the ultimate populist American Dream issue. We all have our own experiences with it, good or bad, and it’s fundamental to our society. When Bush ran for governor, he had a four- or five-point plan, the foundation of which was education. Because he believes, as do I, that if we get education right, we get criminal justice right, we get health right, and we get lots and lots of things in our world and society [right].

When you were advising then-Gov. George W. Bush, the teacher groups gave you an interesting nickname, the Princess of Darkness. You embraced the name.

I represented school boards and my friend represented school administrators — together we represented management. And there are four teacher organizations in Texas, two of whom consider themselves a union and two that are teacher professional organizations. Our union friends, and they are friends, dubbed my colleague and me the Princesses of Darkness. So, and in good humor, on the last night of the Texas legislature, we had black taffeta capes made with “Princess of Darkness” written on the back in silver.

If you were stepping into office as president, what education topic would you want to focus on?

Well, it’s the kind of thing we are focusing on here at Texas 2036, but we have to do a better job with these transitions between high school and college. We need for our high schools to be what they once were, and that is a place where young people could get the skills needed to participate fully in the job market or in higher education.

So, how do we think about turning every high school into a community college? Through relationships with community colleges, four-year universities, dual enrollment, P-TECH, lab schools, on and on. Right now, those programs are too limited, and we need to do it more broadly.

We have done this before through advanced placement and international baccalaureate. We have built all that infrastructure at the elite end. We’ve trained faculty, we’ve brought the support for kids. We have standards, we have assessments that mean something, on and on. We need to do that for everybody else.

The University of Texas announced they are providing free tuition for some students attending their flagship university. Is the university ahead of the curve? Should the federal government be handling college tuition?

No, I think this is a great place for state action. I’m not a fan of free college. And by the way, although it’s a byzantine, cobbled-together and hard-to-navigate financial aid system, college is affordable at the low end. But my idea of bringing community colleges to high school would cut the cost of college in half. You would get the equivalent of an associate’s degree while you were in high school and then be able to shop in your community college or your public university for a really good value.

Texas ranks fairly well on affordability. We could do better. I commend UT and [Texas] A&M for investing in those highfliers, [but] those are students who probably would have found financial aid anyway. The students I’m worried about are those who are in our comprehensive universities, our community colleges and our historically black colleges and universities.

In 2005, you created the Commission on the Future of Higher Education, which revealed some interesting findings about access, affordability, quality and value of education. Fourteen years later, are you encouraged?

Sure. Higher education has enjoyed and — I’ve been a part of the enterprise and loved it — had the attitude of “Send us the money and leave us alone.” What the Commission on the Future of Higher Education asked institutions to do was tell us their goals, what they aim to do, and establish some measurement system around their own self-described goals.

That, obviously, was not well received in Congress. But the good news is that states and foundations like the Gates Foundation, Lumina and others started to embrace those kinds of ideas and principles. Fast-forward to today, there’s a lot more of that going on.

The Obama administration had a not-dissimilar kind of view on some of these issues. I think the body politic is moving in a direction that is shining more light on higher education, asking more questions. And frankly, while the price has gotten so high, students and consumers [have also become] very price sensitive. And the good of that is that community colleges, I think, are much less stigmatized than they once were.

When you think about your work leading Texas 2036, named for the upcoming bicentennial, focused on many issues around sustaining Texas, tell us why this organization should exist. What are you focusing on?

Texas 2036 is trying to put sensible people together to think long-term about the most important issues by using hundreds of publicly available data sets and data systems to inform our work. We aim to be a fact-based, not political, but data-based organization.

There are six areas we are working on that we think are the most important, and frankly, sometimes not the focus of the public debates in Austin or other state capitals or our national capital. [Those] areas are: education and workforce, health and health care, justice and safety, natural resources, infrastructure, and finally something we call government performance — how well do we run this $250 billion enterprise we call the State of Texas.

The other thing I think we want to help Texans understand is how their state is changing and how we need to be responsive to those changes. Or we will not continue to be able to produce the so-called Texas Miracle.

We are growing, we are growing diverse, we are growing poor. We have tremendous assets and blessings in our state, a gulf coast, an oil and gas industry, amazing land, lots of people. Our biggest asset, of course, is our people, our young people. And so we have lots to work with. Storm clouds in the offing, as George W. Bush would have said, but nothing beyond the capability of Texans.

Andrew Kaufmann is the Deputy Director of External Affairs at the George W. Bush Presidential Center.