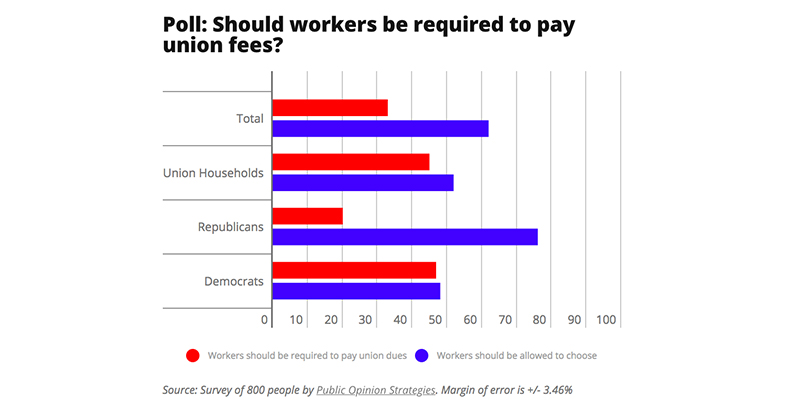 Nearly two-thirds of Americans — even a majority of those in labor households — believe workers should be able to choose whether or not they pay union dues, according to a new poll released just days before the Supreme Court is expected to make a major ruling on the issue in the case Janus v. AFSCME.

The poll, which found 62 percent of respondents saying workers should be allowed to stop paying dues if they choose and 33 percent saying fees should still be mandatory, was conducted for the nonprofit Conservative Leaders for Education by Public Opinion Strategies, a polling firm used by many Republican organizations.

Across race, gender, and age, the majority of respondents favored choice in union fees. But this differed notably when it came to political party. While 76 percent of Republicans said workers should be able to opt out of fees, Democratic respondents were split evenly, with 48 percent against mandatory dues and 47 percent in favor.

Pollsters also asked whether respondents or members of their households were part of a union. Among those who said yes, a majority, 52 percent, supported giving workers a choice in paying union dues.

“It comes down to the idea that in order to get a job, keep a job, be employed, it shouldn’t cost you money to do that,” said Micah Roberts, a partner at Public Opinion Strategies.

The Janus case hinges on the argument that it is a violation of First Amendment rights to require employees to pay fees to a union. Although public-sector union members can opt out of paying dues that support a union’s political activities, they are still required to pay agency fees that cover collective bargaining and other shared employment benefits.

The plaintiff in the Supreme Court case, Illinois state worker Mark Janus, contends that for public-sector unions, even activities like contract negotiations are political in nature. Supporters of mandatory dues argue that it’s only fair for all workers who reap the benefits of a union to help fund them.

The Supreme Court could rule on the case as early as Thursday morning or possibly Monday morning, when its term typically ends. (The 74 has published an array of articles, analyses, and commentaries about the case and its possible ramifications — “Understanding Janus: 13 Ways the Pivotal Supreme Court Case Could Change the Finances, Membership, and Politics of America’s Teachers Unions.”)

Just because respondents in this latest poll don’t support mandatory fees doesn’t mean they don’t favor unions. Recent polling from several different organizations has found that a majority of Americans support labor unions. A recent Educators for Excellence poll reported that 85 percent of teachers view unions as essential. But while 82 percent said they would opt into their union if not automatically enrolled, about 60 percent of non-members said they would opt out of paying their dues if given the choice.

The Public Opinion Strategies poll included a sample of 800 registered voters contacted by landline and cellphone between June 8 and 14. The margin of error was plus or minus 3.46 percent.

This is how the question was posed to respondents: “Currently government workers in many states, including teachers, must pay dues to a labor union as a requirement of their employment whether they choose to participate in the union or not. However, the Supreme Court will soon decide if these employees may stop paying dues. Do you believe that government workers should be required to pay union dues to represent them — or — should be allowed to stop paying union dues if they choose?” For further clarity on what was asked, and who responded to the poll, The 74 has published a comprehensive breakdown of the questions and answers by respondent demographics.

When it came to generational differences, Gen Xers had the lowest percentage of respondents agreeing that dues should be mandatory, at 28 percent, while Baby Boomers had the highest support, at 38 percent. Millennials sat in the middle, at 33 percent.

Looking at race, African Americans were the most likely to support mandatory dues, at 40 percent, while Hispanics were the least likely, at 22 percent. White respondents fell between these two points, with 32 percent favoring the dues.

Karen Nussle, president of Conservative Leaders for Education, said she was surprised by the consistency in responses the poll found across demographics.

“Workers expect to have choices, especially when it comes to their money,” Nussle said. “That’s what people are expressing in the polls.”

A 2017 Education Next poll that asked respondents about whether teachers should be required to pay fees even if they don’t join a union found that 44 percent said no and 33 percent said yes.

Not all states require that people covered by union contracts pay fees. Currently 28 states are right-to-work states, meaning workers get to make the decision to join a union. But for the 22 states that are not right-to-work — including states like New York and California where labor unions wield significant influence — a ruling in favor of the plaintiff Mark Janus could dramatically affect them.

According to documents obtained by The 74, the National Education Association plans to cut its budget by $50 million in anticipation of a ruling not in its favor, and it projects a member loss of 300,000.

“The corporate special interests behind this case are dead set on eliminating the rights and freedoms of working people to organize, to negotiate collectively and to have any voice in working to better their lives,” said Lily Eskelsen García, president of the National Education Association, in a statement about the Janus case.

More information on today’s poll: Click here to see the complete breakdown of the questions and answers by respondent demographics.

Go Deeper: For the latest news and analysis on the Janus verdict, sign up for The 74 newsletter.

Updated Disclosure: The Charles and Lynn Schusterman Family Foundation provides financial support to Conservative Leaders For Education and The 74.