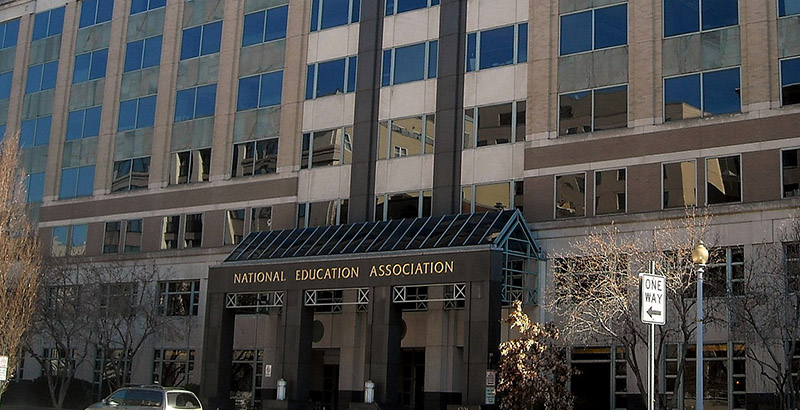 The nation’s largest teachers union plans to reduce its budget by $50 million in anticipation of an unfavorable verdict in Janus v. AFSCME, a case heard by the U.S. Supreme Court in February that challenges the right of government unions to charge non-members for representing them.

When delegates to the National Education Association meet in Minneapolis in July, union leaders will introduce a two-year budget that cuts expenditures by $50 million, an estimated 13 percent reduction from this year.

NEA’s budget committee forecasts a two-year loss of 307,000 members if, as expected later in the spring, the Supreme Court eliminates agency fees — mandatory costs to workers who don’t become union members but are covered by union agreements. Those near-term losses will almost entirely occur in the 22 states where fees are still charged, erasing post-recession membership gains in places like California, New Jersey, and New York.

As of the end of April, NEA’s total membership stood at 3,018,492 active education employees and retirees. Almost all of its affiliates with significant membership growth in the past year were states with agency fees.

Though the proposed budget cuts will not take effect until September, NEA has already begun to reduce staff, eliminating 41 staff positions through buyouts, early retirements, and attrition. NEA employs more than 500 people at its Washington, D.C., headquarters; the average salary is $123,613 plus benefits.

Affiliates in agency-fee states appear to be following suit. The Massachusetts Teachers Association recently approved a budget that projects a 10 percent membership loss in the 2018–19 school year, for example.

NEA’s leaders will also propose a change to who counts as a member. A new category called “community ally” would be open to “any person who demonstrates support in advancing the cause of public education, who advocates for the mission, vision, and core values of the Association, and who is not eligible for any other membership category.”

The designation would extend NEA membership to people who are not employed, nor ever have been employed, in the field of public education. I have referred to this idea as the NEA Fan Club the three previous times it has been proposed, and defeated, by delegates. This time, however, it has the full weight of the union’s hierarchy behind it.

What good would this do, besides being a minor source of revenue? Simple.

Labor unions can only solicit political action committee contributions from members, and are free to conduct unrestricted political communications with them. By contrast, any NEA community ally could be approached for PAC money, though I doubt NEA intends to target your average Joe.

The charter members of the NEA Fan Club will probably be Tom Steyer, Jonathan Soros, Matt Damon, and other deep-pocketed liberals.

The community ally scheme may not stand up to legal scrutiny. NEA is subject to the provisions of the federal Landrum-Griffin Act, which regulates the operations of any labor union with at least one member who works in the private sector. It includes a union member’s bill of rights, the first of which reads:

If NEA were to throw open membership to everyone, those “community allies” would have the right to attend union meetings and vote just as current members do. The burden would be upon NEA to prove that excluding them was an exercise of “reasonable rules and regulations.”

So, as NEA members were leaving the union by the hundreds of thousands, you and I and all of our friends could theoretically take their place. Wouldn’t that be fun?