Excerpt: Going Beyond the Theory That Black Males Owe Their Academic Success to Grit and Resilience 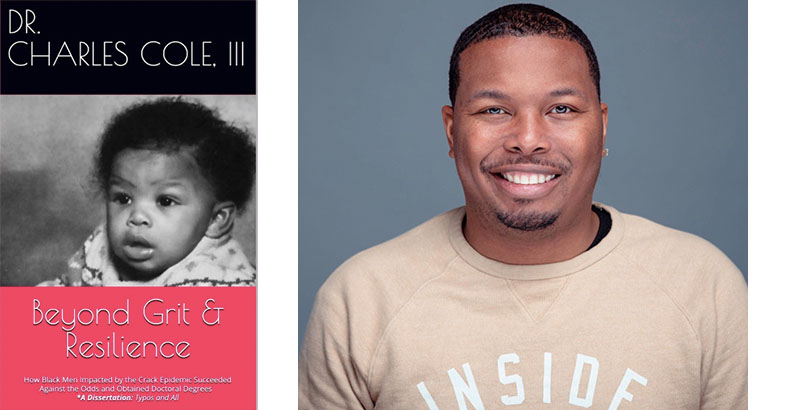 This is an excerpt from Charles Cole III’s self-published dissertation Beyond Grit & Resilience: How Black Men Impacted by the Crack Epidemic Succeeded Against the Odds and Obtained Doctoral Degrees. It’s been lightly edited.

Research on Black males over the past decade has created a pervasive set of ideas that Black men are a difficult group to educate. The growing body of research fails to illuminate the pro-social attributes and strengths of Black men who succeed academically. This dissertation aims to identify the strengths that doctoral Black males have along their educational journey explored via oral histories while also illuminating the resulting residual impact of that journey.

These stories of triumph are essential and sharing them is powerful. I know because I lived it. In the early 1990s, I was 11 years old and enrolled in my 11th school, at least this is my estimate as I sat down and attempted to recall my arduous journey. The backdrop of my life during this time was the crack (cocaine) era. This drug epidemic was prevalent in every place I lived throughout the country from Chicago to Kentucky. My parents struggled with both crack cocaine addiction and incarceration. We were living in Chicago a few months before that. When we moved to California, my mother was stuck in a Kentucky jail. She met us in California when she was released. I remember when we moved into our second shelter. This particular shelter had a weird smell, the food was disgusting, and I hated having to dig for clothes in the donation bin. I hated it, and I hated everyone and everything around me. I remember my mother telling me she felt her life would’ve been different had she gone to college. In the mornings, I would wake up and get my baby sister dressed and fed; she was 3 years old. I would also get my brother dressed and ready for school, and we would all leave the shelter and take the Bay Area Rapid Transit train over to Oakland to school. At this point, I had a weird balance of love and disdain for my parents. Even at a young age, I felt responsible for my education. I felt like it was my only path toward changing my life circumstances. One day in sixth grade, I overheard the secretary in the school office say that this school was full of future criminals — I hated everybody at that school. It was at that point that I had committed to going to college no matter what.

A Note to Nick Hanauer: Income Inequality Hardly a Surprise If You Grew Up Poor in America and Abandoning Education Reform Not Going to Help Black and Brown Students

In 1997, the summer heading into high school, one of my best friends from middle school was murdered. Then, more people I grew up with started dying. In 1999, my sophomore year in high school, I learned a valuable lesson: If I could outwork the people around me, be consistent and maintain a grade point average at the 20th percentile of my school and take these classes called “Advanced Placement,” I could potentially go to college.

I asked my high school counselor for assistance, but she refused to make time for me. I went to her office daily for almost a week. Frustrated, one day, I went to her office without first asking permission from my teacher and sat down. I was told that I would get detention, but I did not care. I just waited. We finally spoke, and I told her I had to go to college. I told her I would outwork everyone around me. She made changes to my coursework, and I kept a decent GPA. I started reading about California State Universities (CSUs); the pamphlet said if I maintained a 3.0 GPA my SAT scores were not critical to my admittance. I earned the 3.0 GPA; I filled out all my applications myself. I did not focus on the schools I really wanted to go to, but rather applied to the schools I thought I had the best chance of getting into. The school just had to have “university” in the name. While I was filling out college applications, more friends were following paths leading to death.

To understand potential success strategies for Black families, it is critical to identify the opportunities and tactics that make a difference in Black male academic success.

In 2001, I was accepted to California State University, Hayward. I knew I would outwork everyone to succeed. In 2005, I earned a bachelor’s degree. I earned my master’s degree in Public Administration in 2010, and then in 2015, I was admitted to the doctoral program at San Francisco State University. The same way I worked angrily at age 11 is the same way I work angrily today. Was this grit or something else? Also, despite my academic success, was other damage done? There are others like me. What do we credit our academic success to? What has my generation learned from our struggles that we now apply to future endeavors?

While in the doctoral program, I became curious about my own pathway toward obtaining a graduate degree. I wanted to better understand how the opportunities, decisions, and mentoring made a difference in my own quest for a doctoral degree. To understand potential success strategies for Black families, it is critical to identify the opportunities and tactics that make a difference in Black male academic success. Researchers have attributed the push that successfully moved me along my academic pathway to academic success to grit, the idea that I persevered because of my powerful passion for my long-term goals (Duckworth, Peterson, Matthews & Kelly, 2007). While true in part, it is an inadequate summation of what I endured to accomplish my goals. To say that my perseverance was solely due to grit erases my story and the evidence of centuries of systemic racism and oppression that conditioned the educational landscape to be what it is today. Also, attributing all success to grit does not speak to the residual impacts that constantly battling trauma and adversity has on my psyche now. What is the true cost of the highest of academic attainment for Black folks that grew up in hell? It is critical to explore the stories of other Black males who have reached the highest level of academic success because not to do so condemns more Black children to the lie that they do not have Black male superheroes living in their very own communities.

Charles Cole III is the founder and executive director of the education advocacy group Energy Convertors and co-founded State of Black Education – Oakland. He received his doctorate in education from San Francisco State University. You can hear him weekly on the 8 Black Hands podcast.

Charles Cole III is the founder and executive director of the education advocacy group Energy Convertors and co-founded State of Black Education - Oakland. He received his doctorate in education from San Francisco State University. You can hear him weekly on the 8 Black Hands podcast.