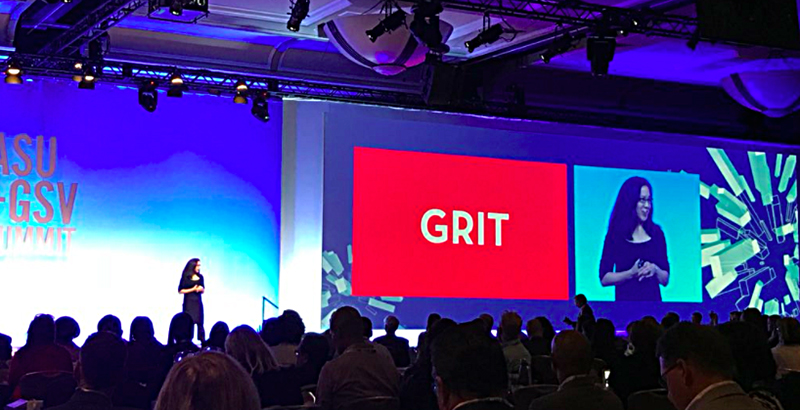 Introducing Angela Duckworth for keynote remarks at the ASU-GSV summit in San Diego, Center for Education Reform CEO Jeanne Allen didn’t quote from Duckworth’s best-selling 2016 book Grit, nor any of the psychologist and author’s research on character development. Instead, she drew on a little-remembered passage from Duckworth’s 2002 application essay to the University of Pennsylvania’s Ph.D. program.

In it, she distilled something like a thesis statement for her work on education: “The problem, I think, is not only the schools but also the students themselves. Here’s why: Learning is hard.”

In the presentation that followed, Duckworth dove into the challenges of both learning and teaching, building on evidence familiar to those who have read Grit or watched her widely circulated TED talk. Long-term success — whether in Algebra, piano classes, or Olympic-level swimming — is less dependent on inborn ability than the dogged refusal to quit in the face of disappointment, she said.

Duckworth is no stranger to disappointment herself. Her appearance on the main stage drew some of the biggest crowds of the conference, a reflection of her growing profile as an advocate for children and schools. But in a private session with nonprofit leaders and former state education officials, Duckworth admitted that her transition to the role of public intellectual has been bumpy at times.

She hasn’t always chosen the right rhetoric in service of her ideas, she conceded. One example: that Penn application essay, which Duckworth called “terrible, tone-deaf, and wrong.”

“That’s a terrible essay to write. Even just listening to it: ‘Schools aren’t the problem, kids are the problem’? No, no, no — kids are never the problem. So a lot of my frustration is frustration with myself. I feel like sometimes I haven’t been communicating effectively. But I’m a human, so I’m learning.”

Even the most adroit public relations strategist might be daunted by some of the blowback that Duckworth’s theories have provoked. The concept at the heart of her writings is that cultivating the inner resources of disadvantaged students — qualities like perseverance and self-restraint, which she asserts are more predictive of achievement than even IQ — is the best way to help them catch up with their more privileged classmates. To some, that’s a troubling and even racist recapitulation of the Horatio Alger narrative, akin to telling poor and minority children that they need to fight twice as hard for a decent life.

Even more moderate commentators have argued that focusing too much on grit risks ignoring the institutional obstacles that poverty, racism, and immigration status pose to students, including those who are willing to work hard. Two years before the release of Duckworth’s book, influential UCLA education professor Pedro Noguera co-authored a critique of her work with his student Anindya Kundu.

The crux of Kundu’s doctoral research revolves around shifting the emphasis from grit to something he and Noguera call “agency” — an individual’s capacity to influence their surroundings. After he reached out to her with his observations, Duckworth chose to serve on Kundu’s advisory committee.

“He’s pointing out things about the narrative that I should take responsibility for,” she said in the private session. “It is not an easy thing to see your research sometimes — like the poem — ‘twisted by knaves,’ but there’s a lot that I have to learn.”

Even as she addresses criticism, Duckworth is striving to build a broader movement around grit that can influence educators and families. With KIPP co-founder Dave Levin, she has established a nonprofit called Character Lab, which generates videos and classroom resources aimed at promoting the development of skills like grit. Right now, she says she’s still learning how to juggle her day job as a professor at Penn with the rigors of leading an organization.

“The reason I’m doing this — and it’s so hard — is because I think that if you want people to do more than, like, put up a ‘Grit’ poster on Pinterest with a picture of a mountain in the back, then you have to give teachers something,” she said. “I feel a personal responsibility to do more.”

She also convenes regular discussions with a group of five high-performing teachers she calls her “brain trust.” Duckworth, a former teacher, says the ongoing conversation has yielded ideas for how to improve classroom practice. But she adds that the quality linking most successful educators is simply walking the talk: modeling behaviors, including grit, that we want students to display themselves.

As she manages the balance between research and advocacy, Duckworth downplays the idea that her work represents a magic bullet for what ails America’s schools. The manifold challenges of reaching millions of kids in thousands of communities are more than any individual scholar — or author, or entrepreneur — can take on, she said.

“I study grit, and I’m really gritty. I love what I do. I work very hard. I have a growth mindset. Education is so hard that it tests even my grit. Holy smokes! Because there’s not only teachers, there’s instruction in schools, there’s funding, there’s zoning. There’s so many things!”