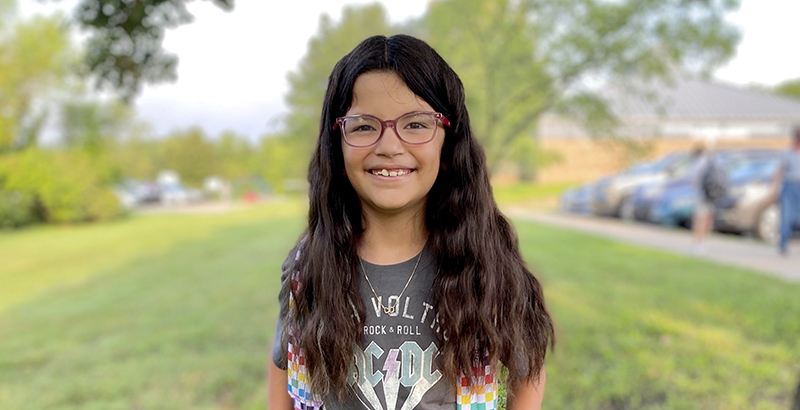 Seven-year-old Catalina Mendez is pictured on Aug. 19, her first day of second grade at Prairie Park Elementary School in Lawrence, Kansas. On Monday, her whole class was sent home to quarantine because a boy tested positive for COVID-19.

Whitney DeHerrera’s second-grader Catalina, who attends Lawrence Public Schools in Kansas, was sent home Monday for a 10-day quarantine — along with the other 21 students in her class.

But other than some paper assignments, which DeHerrera plans to spread out over the next several days, she wasn’t given any guidance to keep her daughter on track.

“There was zero planning in how students are being educated when they are being sent home,” she said. “They haven’t offered any virtual learning, even though the teacher has no children for a whole week.”

A state law limiting students to 40 hours of remote instruction for the entire school year — an effort to strongly nudge everyone back to the classroom — is one reason. Many districts around the country are finding themselves similarly caught off-guard. Some chalk it up to an overcorrection on the part of states and districts, under pressure from parents and the Biden administration to get students back in school after previous botched attempts. But the Delta variant has spoiled best-laid plans for a full return. Some districts are struggling to shift back to remote learning and others are leaving families hanging over how their children will stay on track.

“I really can’t believe our schools are as unprepared for remote learning as they seem to be,” said Robin Lake, director of the Center on Reinventing Public Education. “It’s been clear for months that remote options would be necessary, at least as long as kids remain unvaccinated. Everyone had their heads in the sand, and kids will pay the price.”

The State of the Digital Divide: School Districts Race to Complete Applications for New $7.2 Billion Technology Fund as Push for Remote Learning Intensifies

The Center’s ongoing analysis of districts’ reopening plans shows that 38 out of 100 provide information on how they’ll continue learning for quarantined students, and of those, 16 say they will provide instruction or support.

In California, Gov. Gavin Newsom signed legislation in July that required parents who wanted their children to remain in remote learning to sign up for a program called Independent Study.

That’s caused confusion across the state over whether teachers can still hold Zoom classes with their quarantined students. The principal at Overland Elementary in Los Angeles was among those unclear on the rules, telling parents that the law prohibited teachers from providing live instruction.

That left Alexis Rochlin’s first grader Henry — one of 20 students in a single class quarantined for six days at Overland — with no more than an hour of schoolwork. And with family gatherings for Labor Day and the Jewish holidays approaching, she’s expecting more quarantine periods in the future. 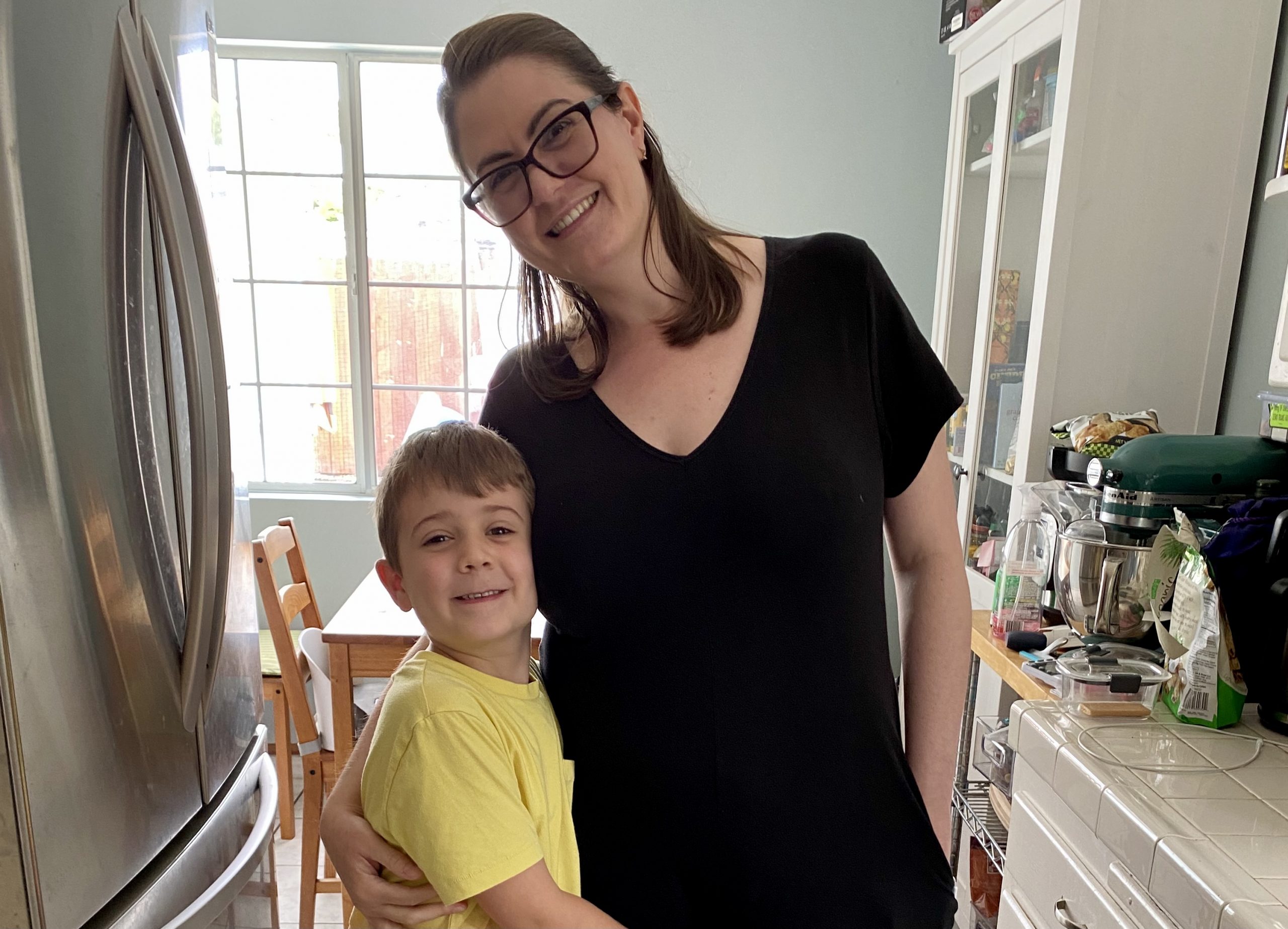 Los Angeles parent Alexis Rochlin said her son’s teacher wanted to teach over Zoom while the class was in quarantine, but the principal later said that was not allowed. (Courtesy of Alexis Rochlin)

The Los Angeles district announced a temporary solution this week in which teachers can use Zoom if an entire class is out or livestream their lessons if just a few students are out.

But that was after Kathy Meza’s fourth-grader Matthew missed seven days of learning. He was quarantined on the first day of school, Aug. 16, and she said she never received any communication from teachers.

“He was not getting any homework. He was basically home doing nothing,” said Meza. He was like, ‘When I go back to school, everything will be new for me.’” 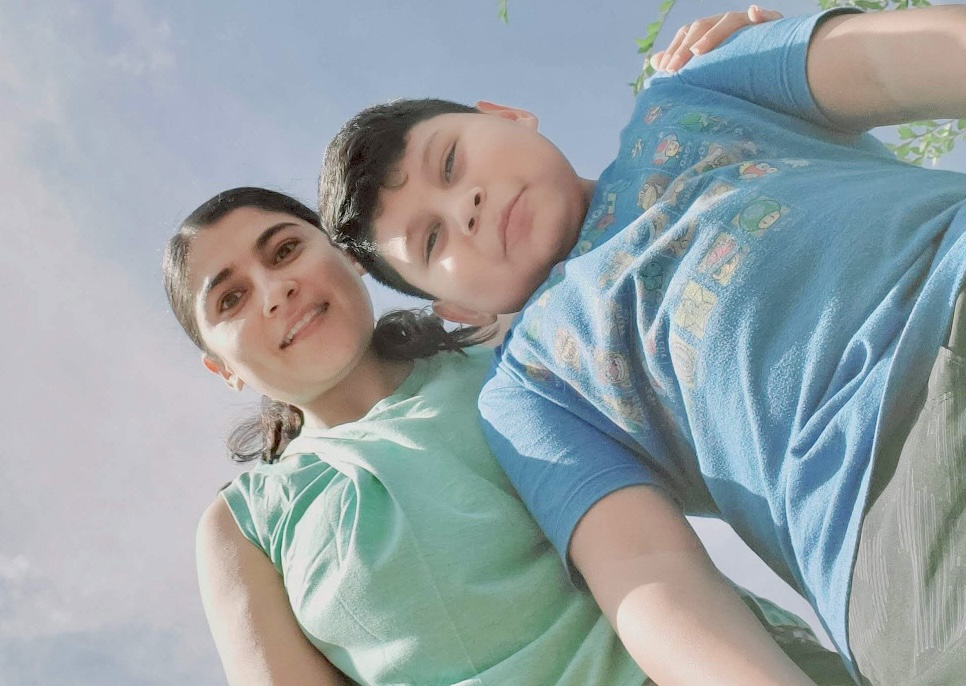 Kathy Meza said her son Matthew didn’t receive any schoolwork while he was in quarantine. (Courtesy of Kathy Meza)

Even though Los Angeles leaders responded to concerns from parents, others in the state are still waiting for answers. When Bobbie Lambert’s daughter Krystal, a student in the San Juan Unified School District, near Sacramento, was quarantined, her junior ROTC teacher was the only one to upload any assignments onto Google Classroom.

Jenny Hontz, spokeswoman for advocacy group Speak Up, said she doesn’t expect the legislature or Newsom, who is facing a Sept. 14 recall, to make any changes regarding remote learning until after the vote.

“The governor doesn’t want to do anything that looks like we’re going back to Zoom school, but that’s standing in the way of common sense,” she said. The state has been criticized for delaying school reopening in the spring, and “now they’ve overcorrected,” she said. The California Department of Education did not respond to requests for comment on this story.

“It’s going to be such an equity issue,” said Hannah Gravette, regional vice president in Los Angeles for Innovate Public Schools. “There needs to be some other access to classrooms, even if you’re just watching what the teacher is doing.”

One complication in many districts, however, is that the laptops students were assigned last year have now been returned to school. That’s the case in the Hillsborough County Public Schools in Florida, where nearly 10,000 students are in quarantine. The district last week approved a $2.6 million contract with an online tutoring service that students can access around the clock.

But there’s a hitch: In many ways, schools in the Tampa area are facing the same remote learning challenges they did when schools first closed in 2020. Some don’t have internet access. Others only connect on their phones, and some parents can’t pick up paper copies of lessons at school because they’ve tested positive for COVID-19. Even if a student has a computer, teachers aren’t required to teach over Zoom due to an agreement with the local teacher’s union, said spokeswoman Erin Maloney.

“Kids are required to keep in contact with their teachers,” she said. “But we try to be reasonable because every student’s situation is different.”

In Georgia, several metro Atlanta schools have already transitioned to remote learning or added hybrid options because of outbreaks. The Cobb County School District, where dozens of parents have been protesting leaders’ decision to keep masks optional, initially turned down requests to reopen registration for its virtual academy.

This month, leaders announced they will reopen the application period later this fall if families want remote learning during the second semester. But that doesn’t address the interruption in learning for students in quarantine.

“There was pretty much nothing offered to us — no Zoom, no live option at all,” said Meredith Copley, whose children, ages 10 and 12, were quarantined last week.

She had to work, so she told her son how many chapters to read each day and gave him a math worksheet.

A few states, such as Ohio and North Carolina, are now considering policies that would bring back remote options.

Some lawmakers want to limit virtual options to higher-achieving students. The Texas legislature is advancing a bill that would cut off state funding for students learning remotely if they scored low on state exams last year or were chronically absent.

Joseph South, chief learning officer at the International Society for Technology in Education, said it’s “counterproductive” for leaders to eliminate options that technology has already made possible.

It’s a political climate where it’s hard for schools to catch a break. Just three months ago, they were under fire for taking too long to reopen. U.S. Secretary of Education Miguel Cardona said he was expecting “all schools will offer full-time in person learning to every student this fall.” Assessments show some students are months off track academically — with remote learning getting the lion’s share of the blame.

But the tricky politics of the pandemic seem unlikely to change soon.

Looking several months ahead, Vikki Katz, a professor of communications at Rutgers University in New Jersey, expects to see “a checkerboard where the politics of where you live will determine the vaccination rates for younger kids.” Once vaccines are available for students in the elementary grades, quarantines will recede in some communities and persist in others, she said. She doesn’t expect vaccine mandates for students until 2022-23.

That’s why this year, she said, policymakers and district leaders should “use a scalpel and not a hammer” in determining remote learning policies.

Katz advocates for districts to hire college-age “digital navigators” to serve as a “link between families and schools when they need it badly.” But she added, “large bureaucracies move slowly and viruses move quickly.”

Submit a Letter to the Editor
September 1, 2021