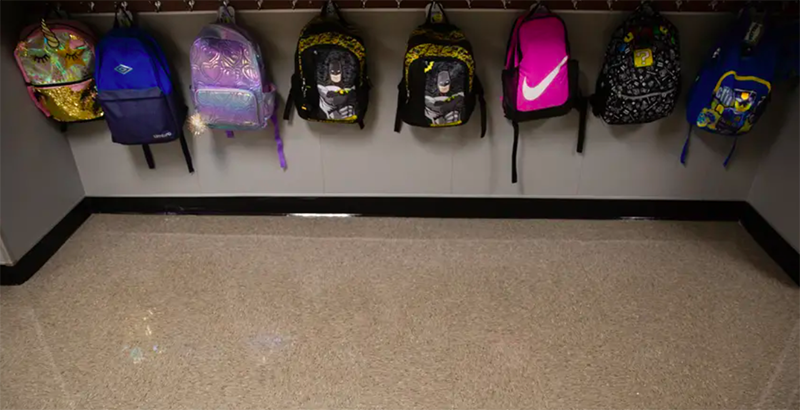 Some rural school districts in Texas have temporarily closed some or all of their campuses because of the pandemic, due to rising numbers of staffers and/or students out sick with the virus or in quarantine. (Shelby Tauber / The Texas Tribune)

If you get sick in Iraan, a West Texas town with a population of about 1,300, there is a hospital — with 14 beds. There is no critical care, meaning the most that hospital workers can do is stabilize patients and transfer them to a bigger hospital.

Family practitioners with emergency room experience staff the hospital. There are no specialized doctors, no ventilators and no ICU. The closest hospitals with those kinds of services are in Midland, Odessa and San Angelo, all 80 miles or more away — if hospitals there are accepting transfers, a real question as the latest pandemic wave surges.

So having 50 people in Iraan test positive for COVID-19 in the last few weeks is a very scary thing. Only four of the adults needed hospitalization, but three of them needed ventilators and were airlifted out, said Jason Rybolt, administrator of the Iraan General Hospital District.

No one in Iraan has died due to COVID-19 and no children have been hospitalized for it. But when Tracy Canter, superintendent of the Iraan-Sheffield Independent School District, looked at the figures and then considered what the return to school could mean for her 335 or so students and 70 employees, the path seemed clear. She announced on Aug. 16 that the district would close until Aug. 30.

Before the shutdown, 23% of the district’s staff was out either because they had tested positive for COVID-19 or been exposed to it, Canter said. About 27% of the instructional staffers were already out because of coronavirus and about 17% of students were also out because of either exposure or contracting the virus. Those numbers were more than the district saw for all of last year, she said. And they’re even worse for a tiny district where employees may perform several jobs. During the day, some teach and then coach and then drive the bus.

“We felt, based on these extenuating circumstances, that it was best for the safety and security of our students and staff to go ahead and quarantine,” Canter said.

Three other rural districts in Texas have since taken the same route, temporarily closing some or all of their campuses because of the pandemic, due to rising numbers of staffers and/or students out sick with the virus or in quarantine, and, in Iraan’s case, because of the lack of local medical facilities to deal with those who need hospitalization.

All four districts are in areas where fewer than a third of residents are fully vaccinated, and nearby hospitals that offer critical care are experiencing staffing shortages while the delta variant wages war on the Texas health system.

In Morgan Mill, Superintendent Wendy Sanders said in an email that even though half the school district staff is out sick, many of them do not want to be tested for the coronavirus.

“It was their personal choice to not get tested,” Sanders said. “I don’t believe in taking away personal freedom of choice and enforcing testing.”

Closings of the small districts led the Texas State Teachers Association on Aug. 18 to call, again, for Gov. Greg Abbott to withdraw his order against mask requirements. The group urged all educators and students in the state to wear masks to campuses, as recommended by health care experts.

“Unfortunately, the closure of these small school districts is more proof that the COVID pandemic is still dangerous and needs to be taken seriously by the governor and school officials,” the organization said in a statement. “People must get vaccinated, and educators and students need to wear masks to school.”

But while other districts across the state are battling Abbott over mask mandates, these four small districts will nonetheless follow the governor’s order. They will not require masks for students or teachers. And they will follow the latest Texas Education Agency guidance.

The Texas Education Agency did not respond to comment about how it is dealing with school districts that have closed.

Kevin Brown, executive director for the Texas Association of School Administrators, said children learn best in person, and after a year of uncertainty, schools were ready to be back in classrooms. But for small communities, someone being sick or in need can take an emotional toll not only on one family but on the whole community, he said.

“They are a human being with a name that everybody in the community most likely knows,” he said.

Brown also reiterated that these small districts have limited options in terms of staffing and that big districts can more easily find substitutes or find other ways to not completely shut down. One of the other challenges with rural districts is that one staff member may be doing multiple jobs like teaching and coaching.

Iraan-Sheffield ISD will have remote conferencing for students, as the latest TEA guidance allows.

Tracy Jackson, a parent of a senior in Bloomburg ISD, said closing the school was the best decision the district could make for students and staff. While she isn’t scared for her 17-year-old, she knows the district will do what it takes to make schools safe and not have to go through another closure, she said.

To help reduce the spread of the virus, Jackson — like others — said masking and vaccination are the only way to get out of the hole. She worries that closures because of the virus could keep happening.

“I’m hoping that one is enough to clean the school and heal the staff and students that may be sick,” she said.

In Iraan, 50 positive cases out of 119 tests for COVID are concerning for Rybolt, the hospital district administrator, and his staff. It’s the most positive cases the hospital has seen since Rybolt took on the administrator’s job in December 2020. If more town residents need to be hospitalized, it could spell trouble since other hospitals in the region are already having staffing shortages.

Russell Tippin is president and CEO of Medical Center Health System, which includes Medical Center Hospital in Odessa, one of the facilities to which the Iraan hospital transfers.

“It’s a very small hospital,” Tippin said. “So when you get one or two, definitely three or four patients in there, that puts them under a lot of stress.”

Tippin said the Odessa hospital could well surpass its peak number of COVID-19 patients and run into more trouble because of staff shortages.

“Our staff is tired, they’re stressed out,” Tippin said. “They’re tired of seeing these healthy 20-, 30-year-olds come in with COVID and either being on a ventilator and being very, very sick or passing away.”

Don McBeath, director of government relations for the Texas Organization of Rural and Community Hospitals, said he’s seen a drop in the number of nurses employed in rural hospitals because of the hardships endured over the last year. There are 23,000 more unfilled jobs in Texas for registered nurses than there are nurses seeking to fill them, according to a labor analysis by the Texas Workforce Commission.

“We have nurses that retired and said, ‘I’m too old for this,’” McBeath said. “We probably have some younger nurses that just said, ‘This is not what I bargained for.’”

Disclosure: The Texas Association of School Administrators and Texas State Teachers Association have been financial supporters of The Texas Tribune, a nonprofit, nonpartisan news organization that is funded in part by donations from members, foundations and corporate sponsors. Financial supporters play no role in the Tribune’s journalism. Find a complete list of them here.