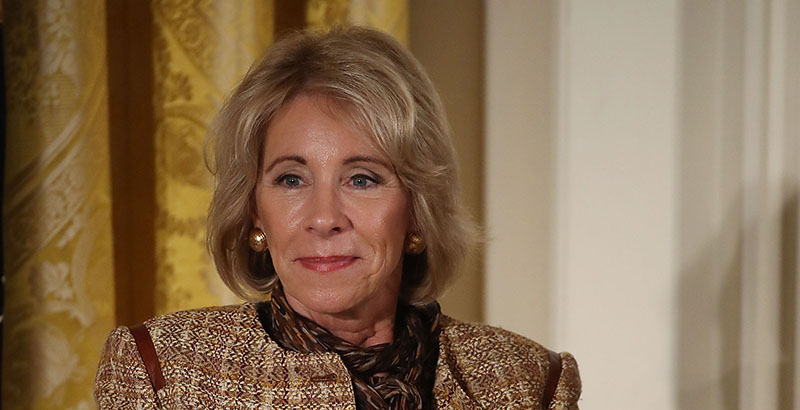 Under the “equitable services” provision of Title I of the Elementary and Secondary Education Act, low-income students attending private schools are eligible for tutoring and other services like their peers at public schools. Private schools, which may decline to participate, work with school districts to negotiate the services they need, and the district then provides the services using its own personnel or pays a third-party service provider.

The current version of that law, known as the Every Student Succeeds Act, requires that those service providers be “independent of … any religious organization.”

The Education Department said that restriction violates the Supreme Court’s 2017 Trinity Lutheran decision. In that case, justices ruled that a church-affiliated preschool could not be barred from a playground resurfacing program simply because of its religious affiliation.

“The Trinity Lutheran decision reaffirmed the long-understood intent of the First Amendment to not restrict the free exercise of religion,” Education Secretary Betsy DeVos said in a press release. “Those seeking to provide high-quality educational services to students and teachers should not be discriminated against simply based on the religious character of their organization.”

A legal challenge to the department’s change seems likely, given ongoing legal disputes about the scope of the Trinity Lutheran ruling.

Under the change announced Monday, teachers at a parochial school could, for instance, attend a secular professional development program at a Catholic university, Sister Dale McDonald, director of public policy at the National Catholic Educational Association, told The 74.

School districts would still have to approve the expenditure, she noted.

The change wasn’t one the Catholic education group had been actively seeking, McDonald said.

“It would come up occasionally. We were starting to think about it after the Trinity Lutheran decision … If the services have to be secular, neutral, non-ideological, well then, anybody can provide them who’s competent to provide them,” she said.

It’s difficult to say how much Title I money nationally could now go to religiously affiliated organizations under this program. In Massachusetts, for instance, about $4 million of the state’s total $237 million Title I allocation went to private schools last year.

“It sounds like something that is a first step. It’s the step she was able to take toward sending public dollars to private schools and private religious schools,” he said.

The Education Department did not respond to a request for comment on what spurred the change and whether further policy changes are forthcoming in light of the Trinity Lutheran decision.

A legal challenge is likely, particularly given House Democrats’ comments that they’ll be looking into DeVos’s legal justification, Sargrad said.

A spokesman for House Education and Labor Committee Chairman Bobby Scott told Politico that House Democrats are “carefully reviewing the legality” of the proposed change.

The decision will have an impact, but not immediately, McDonald said: “It’s something that will take time to work out, that people understand what the limits are and how much can be done and who can do what.”