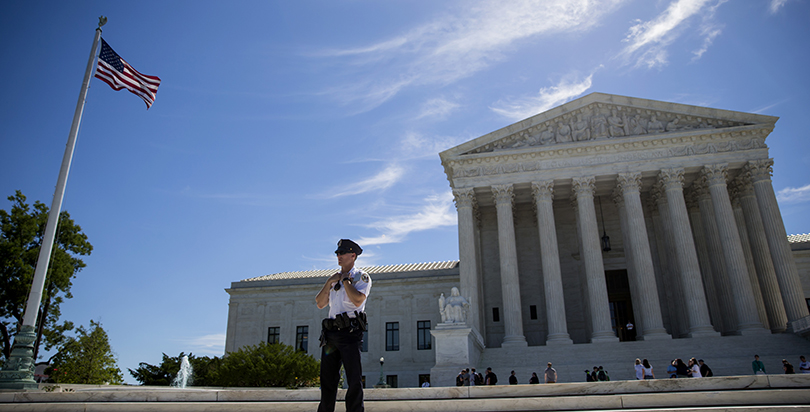 The Supreme Court on Monday ruled that barring a church-affiliated preschool from receiving a general public benefit violates constitutional protections for the free exercise of religion.

The justices ruled, 7–2, that Missouri officials could not use a provision in the state’s constitution that bans state aid to religious organizations to exclude Trinity Lutheran’s preschool from a state grant program that funds the use of recycled tires to make safer playground surfaces. Five of those seven justices clarified that the decision applies only to playground resurfacing.

Provisions banning state aid to religious organizations and schools, like the one in Missouri’s constitution, exist in nearly 40 other states. Known as Blaine amendments, they have often been the reason for temporary or permanent bans on vouchers, education savings accounts, and other private school choice programs. Such programs were not discussed during oral arguments or in any of the justices’ opinions.

“This decision marks a great day for the Constitution and sends a clear message that religious discrimination in any form cannot be tolerated in a society that values the First Amendment. We should all celebrate the fact that programs designed to help students will no longer be discriminated against by the government based solely on religious affiliation,” she said in a written statement.

The church, Trinity Lutheran, had said it was being illegally excluded because it was religiously affiliated, and that its right to practice its religion was impeded. Missouri had said its decision not to fund sectarian programs didn’t hinder those congregations’ right to worship.

Although the consequences of barring Trinity Lutheran from participating in the tire recycling grant program are likely no more than “a few extra scraped knees,” doing so still violates the Constitution’s protections of free exercise of religion, Chief Justice John Roberts wrote for the majority.

“The exclusion of Trinity Lutheran from a public benefit for which it is otherwise qualified, solely because it is a church, is odious to our Constitution all the same, and cannot stand,” he concluded.

Although Justice Anthony Kennedy, usually the swing vote in close cases, didn’t play a major role in today’s decision, he was being closely watched as the focus of retirement rumors. His departure from the court would let Trump nominate another justice and swing the court sharply to the right as it decides future church-state and other hot-button cases.

During oral arguments in April, justices focused on health and safety being the purpose of the state program Trinity Lutheran applied to be part of — one that wasn’t likely to advance any particular set of religious beliefs.

Inside the Supreme Court: Are Justices Ready to Side With Church in Case About Playground & State Funding?

The decision includes a footnote clarifying that “the case involves express discrimination based on religious identity with respect to playground resurfacing. We do not address religious uses of funding or other forms of discrimination.”

Justice Stephen Breyer, in a concurring opinion, specifically emphasized the particular nature of the public benefit from which Trinity Lutheran had been excluded: the health and safety of children.

“Public benefits come in many shapes and sizes,” he wrote. “I would leave the application of the Free Exercise Clause to other kinds of public benefits for another day.”

Jeanne Allen, president of the Center for Education Reform, which advocates for school choice, including private options, said the decision is a victory for religious freedom for faith-based schools.

The education reform center “will work to ensure that there are other opportunities for the court to review the constitutionality of Blaine amendments and pave the way for parents to decide the best educational opportunities for their children, be they private, religious, or public in nature,” Allen said in a statement.

Two of the court’s most conservative members argued that the decision should be applied more broadly and did not join the part of the opinion limiting its application to the playground resurfacing.

Trump’s recent appointee, Justice Neil Gorsuch, joined by Justice Clarence Thomas, wrote a separate concurring opinion in which he argued that footnote might cause others to read limitations into the decision.

“The general principles here do not permit discrimination against religious exercise, whether on the playground or anywhere else,” Gorsuch wrote.

The ACLU, in a statement expressing disappointment with the decision, also focused on the limited nature of the decision.

“Religious freedom should protect unwilling taxpayers from funding church property, not force them to foot the bill. The court’s ruling, however, focuses specifically on grants for playground resurfacing, and does not give the government unlimited authority to fund religious activity,” Daniel Mach, director of the ACLU’s Program on Freedom of Religion and Belief, said in a statement.

Justices Sonia Sotomayor, in a dissent joined by Justice Ruth Bader Ginsburg, argued that the decision is about more than playgrounds.

“This case is about nothing less than the relationship between religious institutions and the civil government — that is, between church and state. The Court today profoundly changes that relationship by holding, for the first time, that the Constitution requires the government to provide public funds directly to a church,” Sotomayor wrote.