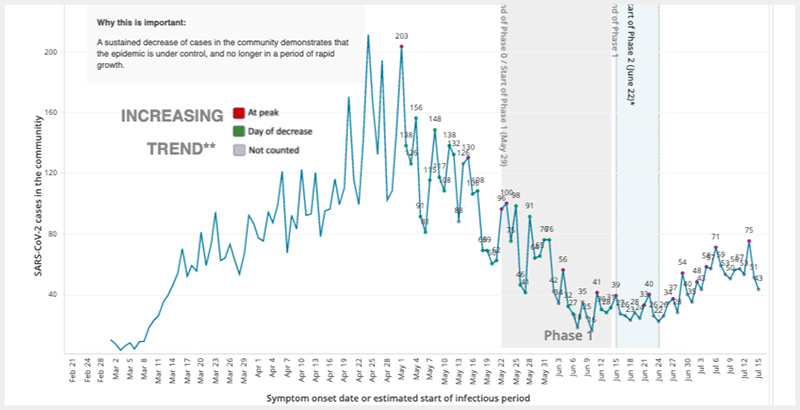 July 30 Update: DC Public Schools announced an all-virtual start to the 2020 school year despite federal pressure in its own backyard. We’ve launched a roundup of 10 things families need to know.

D.C. Public Schools on Friday morning will announce whether it can offer in-person learning to families for the start of the 2020-21 year as the region continues to weather an increase in coronavirus infections.

The 52,000-student district had already delayed the announcement once, on July 16, with Mayor Muriel Bowser citing a “volatile” trend in local COVID-19 cases.

Options on the table

“There will always be a virtual option” for families when school begins Aug. 31, Bowser confirmed earlier this month. What remains undecided is whether DCPS can also provide parents a “hybrid” choice, whereby students would spend one to two days in the classroom depending on grade level.

Safety protocols would include having no more than 12 people per classroom, a “daily supply” of disposable face masks, desks six feet apart and a weekly deep cleaning of schools, according to district presentations. Officials have noted that even if a hybrid model is possible, they may not be able to honor all requests depending on staffing capacity. 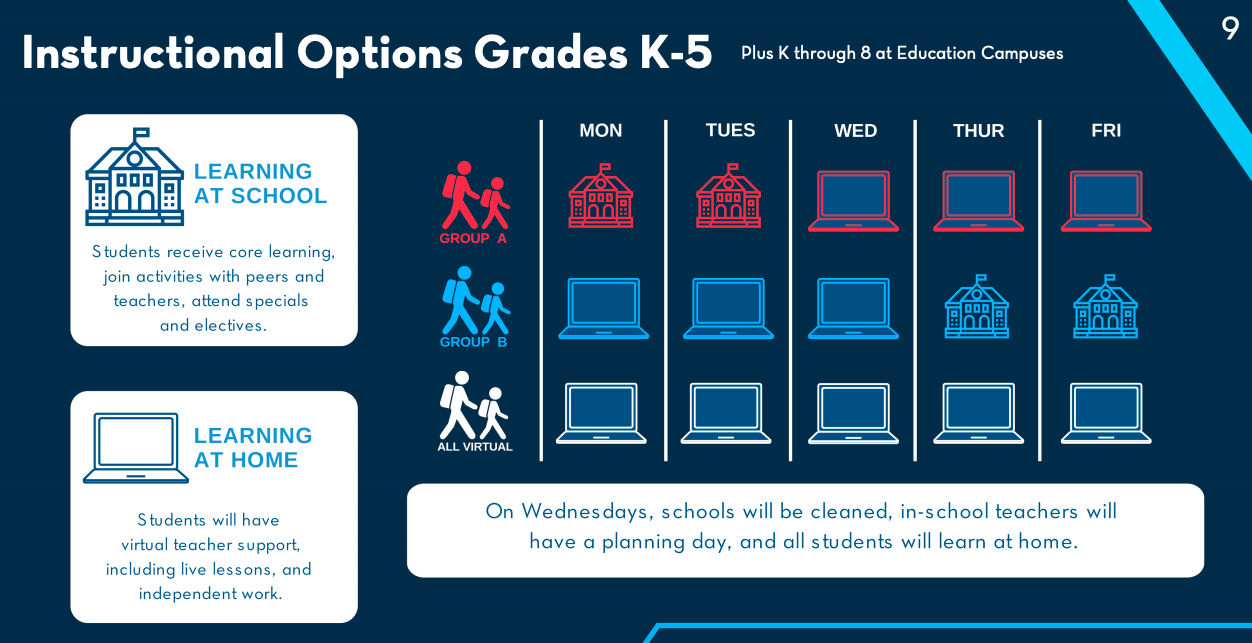 Example of hybrid K-5 schedule, whereby one group would attend class Monday and Tuesday and another Thursday and Friday, with a Wednesday school cleaning in between. (DCPS, Mayor’s Office)

A district spokesman Wednesday said while DCPS is considering local school districts’ reopening decisions, “we are working with DC Health to determine next steps related to the best path forward for our students and staff.”

About half of 17,200 DCPS staff, students and families surveyed in June expressed a preference for in-person learning. That was when D.C. was seeing its lowest COVID-19 case counts since April.

In past weeks, there has been an increasingly vocal denouncement of in-person learning — especially from teachers — as COVID-19 counts have crept back up. Although D.C.’s positivity rate among tested residents is 3.7 percent, below the 5-percent mark the World Health Organization considers safe for states to reopen, its health data are still indicating an “increasing trend” in coronavirus cases.

“Schools are places that connect us all, and normally that is a beautiful thing. But right now, it is deadly,” DCPS art teacher Julia Major said during one roundtable.

Districts nationwide face pressure to reopen; Republican senators, for example, unveiled an emergency relief bill this week in which two-thirds of $70 billion would be reserved for K-12 schools providing some form of in-person learning.

The decisions haven’t always been met with fanfare. Some families are now considering learning “pods” and private schools that plan to reopen.

Various D.C. advocates, while supporting online-only learning, do worry that DCPS doesn’t know the full extent of its students’ laptop and Wi-Fi needs and that the $6.9 million allocated in the local FY21 budget won’t be enough. Nearly two-thirds of about 500 DCPS educators surveyed by the teachers union in June said up to a quarter of students didn’t have a device or Wi-Fi by school year’s end.

We asked teachers. Many students still lack devices and/or access.

Equity requires that we move towards a 1-to-1 device ratio. We know that all students will participate in on-line learning for at least part of their school year. https://t.co/6Y9YU2qEbe pic.twitter.com/If6wFTrKos

“There’s going to be a lot more issues than tech come the fall. But this … that’s fixable,” parent Grace Hu told The 74.

DCPS has recently launched a survey to gauge students’ tech needs. Chancellor Lewis Ferebee on July 16 also said the district will have about 36,000 devices to distribute next year and that new devices will be LTE-enabled to “eliminate the need for additional hotspots.”

Friday’s announcement is currently scheduled for 11 a.m. It will be livestreamed on the following platforms: Mayor Bowser’s Facebook page, Twitter, DC Cable Channel 16 and here.