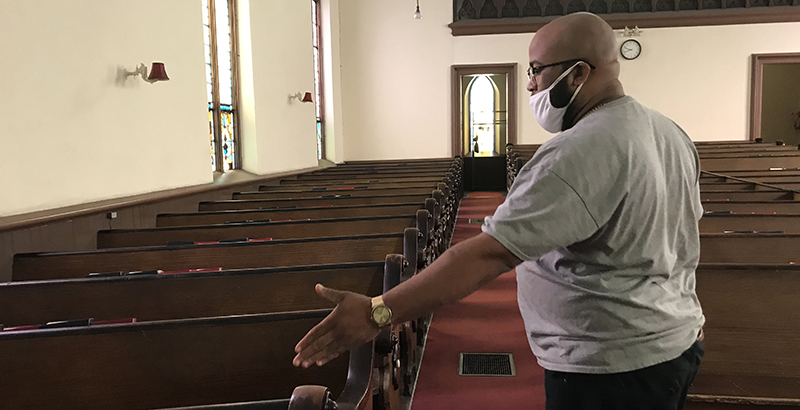 Roy Smith shows how students will sit in the pews at Jones Road Congregational Church to do their online lessons, once the first nine students fill a church meeting room. (Patrick O’Donnell)

Long tables fill a small church meeting room, spaced apart for students to do online school work while schools are closed because of COVID-19. The first nine students to sign up will work here.

After that? Roy Smith walks into the church sanctuary and points to the rows of wooden pews. Another nine can sit out here on the wooden benches, he says, and use their laptops in the literal way — in their laps.

“It’s a little odd,” conceded Smith, who will run the center, which signed up its first student Tuesday. “When they’re sitting down, they can have their computer in the middle and they’ll have their paperwork on each side of the pew, so the kids will have enough room to do what they need to do.”

He kneeled at the front of the church in front of a pew. Students can kneel like him, he said, if they need to write something on paper. The hard benches make a good table.

“We have pillows and stuff, so that way they’re not on the hard floors hurting their knees,” he said. 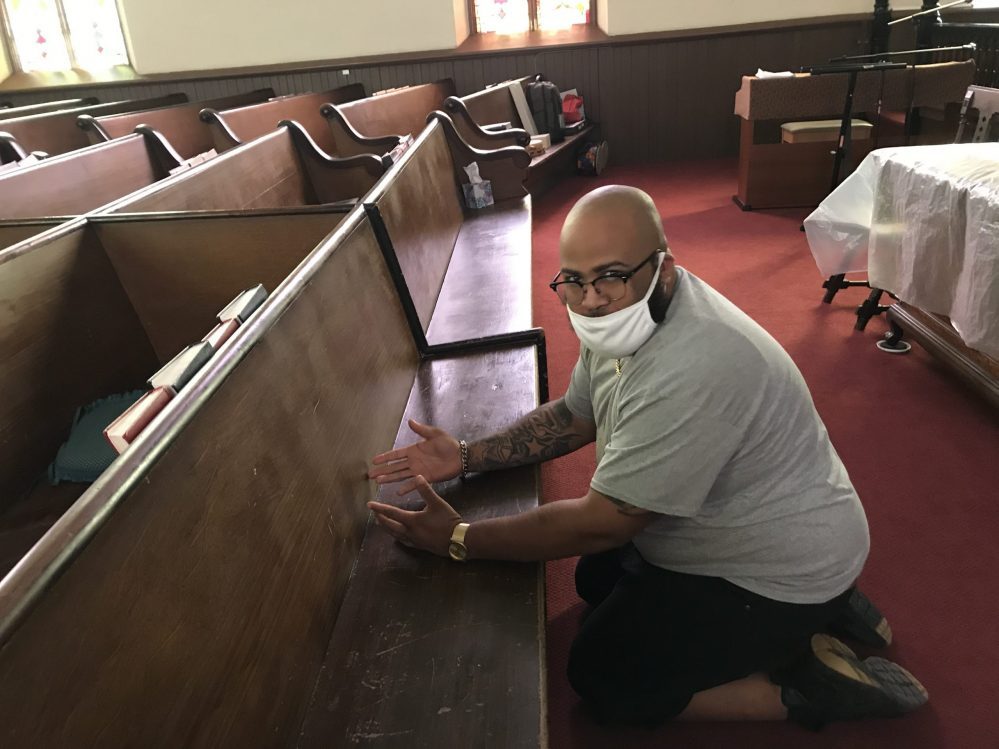 Roy Smith, head of the learning center at Jones Road Congregational Church, shows how students can kneel and use the pews as tables to write. (Patrick O’Donnell)

Such is the nature of the on-the-fly and sometimes-makeshift learning “centers” – or “pods,” “hubs” or “labs,” depending on whom you talk to — that are opening across Cleveland and the nation as COVID-19 has forced about half of the nation’s schools to start the school year with online classes only.

Over the past two weeks, an estimated 50 centers have opened across Cleveland giving kids a safe place to go all day, with internet access so they can keep up with online classes while parents work.

The Cleveland Foundation and the United Way of Greater Cleveland helped create many of them with a $1 million grant to 25 nonprofits and other agencies to serve more than 800 Cleveland school district students at centers across the city over the next several weeks.

But they’re also a new and evolving phenomenon that has cities, school districts, nonprofits, social services and churches — even state regulators — figuring things out as they go.

Even as 50 centers, maybe more, open across Cleveland this month, there are still questions swirling over what demand will be like and whether staff at centers can support students in their remote classes.

That’s on top of worries about funding and the biggest danger of all, COVID-19.

“This is all unprecedented,” said Dale Anglin, of the Cleveland Foundation, the city’s largest philanthropic organization, which is encouraging creation of centers across the city. “We’re building this plane as we’re flying it.”

When the Cleveland school district announced at the end of July that the school year would start online-only, Anglin said, district officials and philanthropic leaders started seeking ways to help families.

“Why don’t we create some of these learning pods that rich people in San Francisco are creating for their own kids?” she asked. “How do we do that for some of our neediest students because they can’t pay for those services?”

Cleveland has the highest childhood poverty rate in the country, and median family income in the city is a little over $26,000 a year. The centers won’t offer a private teacher like most pods do. Instead, there will be adults to supervise and assist students with the online class work.

But Nancy Mendez, vice president of community impact of the United Way, said the centers will give students a safe place to learn during the day, meals and a structured schedule, particularly when parents work all day.

“We can stabilize and help that child not experience learning loss and be on top of their education,” she said.

The 25 grant recipients include a few churches, including Jones Road, arts and theater organizations, domestic violence shelters and even the county public housing authority. Grants were limited to organizations that already work with the district, either for in-school or afterschool programs, with a maximum of nine students per room. 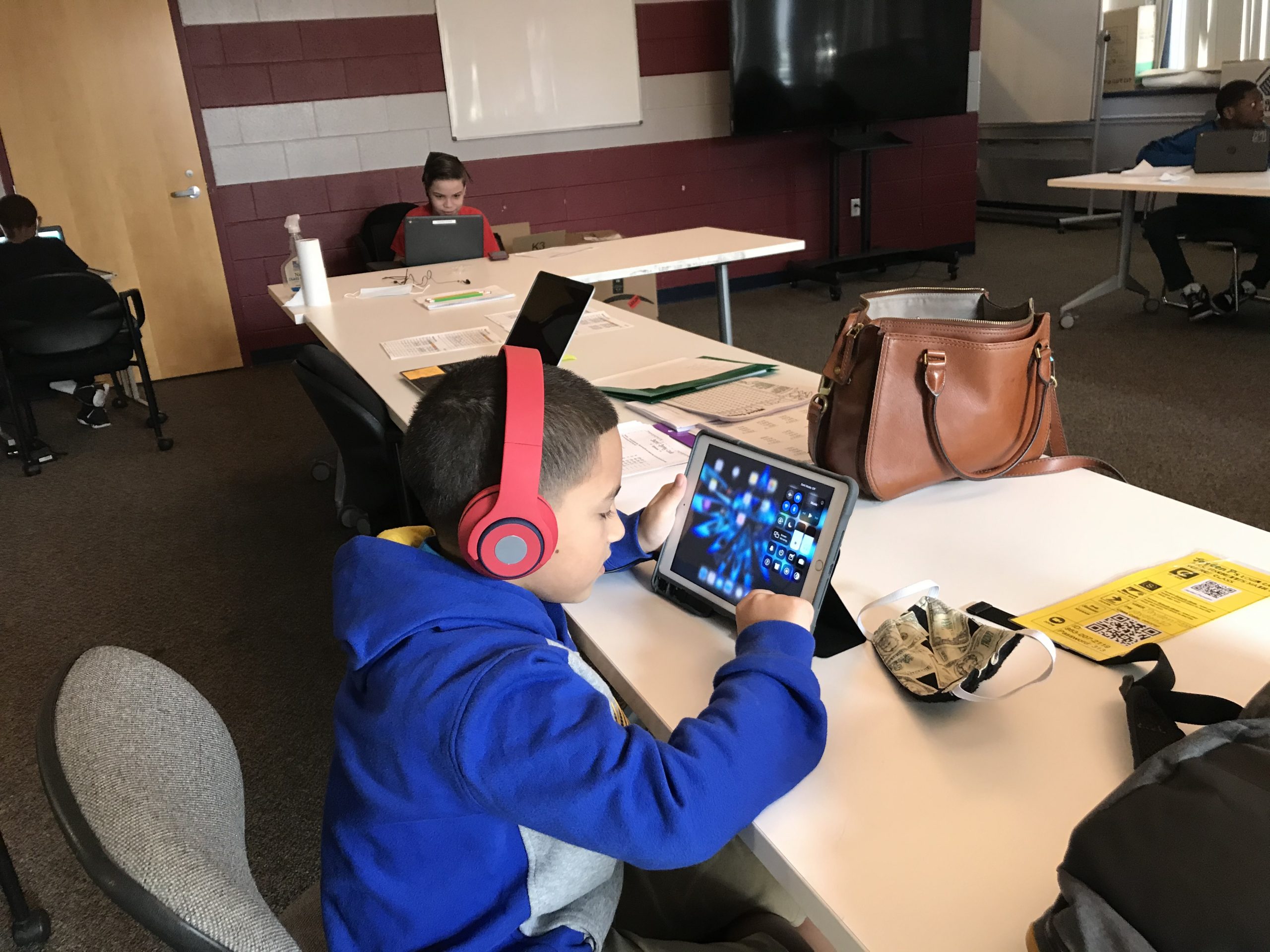 Students work on lessons on their laptops in a meeting room at the Broadway Avenue Boys and Girls Club in Cleveland. (Patrick O’Donnell)

Most didn’t know until last Thursday that they would receive the grants, so they are filling seats now. Others previously reached out to families they know through afterschool and other programs they already run.

Esperanza, a social service and mentoring program for Hispanic students and families, won part of that $1 million to create a center for up to 18 students at its headquarters. Executive Director Victor Ruiz said his center will take kids from fifth grade and up and has filled 14 seats so far.

“The demand is high, but I think we all still have a little work to get word out that these are available,” Ruiz said. “We feel by the end of the week we’ll be filled up.”

The Cuyahoga Metropolitan Housing Authority will run five centers at housing projects across the city with an unusual pattern — serving first- through third-graders on Monday and Tuesday and fourth- through sixth-graders on Thursday and Friday.

Kristie Groves, who runs residential services for the authority, said she already has a waiting list at some centers. She said students already participating in afterschool programs at community centers run by the authority quickly signed up, even though they only cover two weekdays and not all five.

But Anglin and others aren’t sure what the overall demand in the city will be like. They don’t know how many parents will need or want a place for their children, but they hope to find out soon.

Other centers are opening in the city separate from the $1 million grant program. 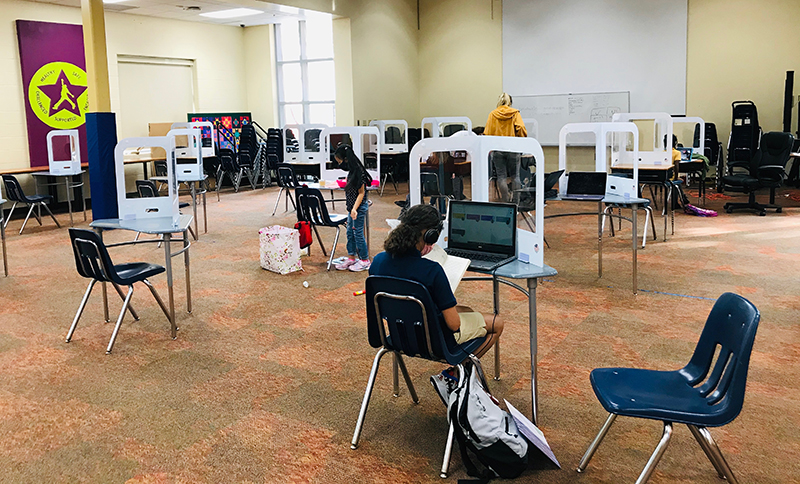 Students are spread out and have breath shields at their desks at the learning center at Urban Community School in Cleveland. (Patrick O’Donnell)

Urban Community School, an independent Catholic school in the city, is hosting a learning center just for children of parents who work at MetroHealth Medical Center, the county hospital. Tom Gill, the school’s president, said he expected 50 students a day, which dropped to 30, then to 12 to 15, as late as last week.

This week, he said, he’s seeing about eight students per day. He’s not sure why, though he speculates that the $25 per day the hospital charges may hurt.

The Boys and Girls Clubs of Cleveland is running six centers at clubs in the city and immediate suburbs, serving more than 200 students per day. Visits by The 74 to the Broadway Avenue club in Cleveland last Tuesday and again this week showed a few dozen or more students working on classes or playing sports after school in the gym.

With the club’s center now in its second week, staff say the confusion and technical issues from the first week have fallen dramatically.

“That first week, we had to figure out the system they use — who uses Google Classroom, who uses Teams, who uses Schoology,” said Steven Collins, the club’s gym instructor, as he watched a half dozen students, ages 10 to 13, work at tables spread out in the gym. “Once you figure out that, it gets rolling.” 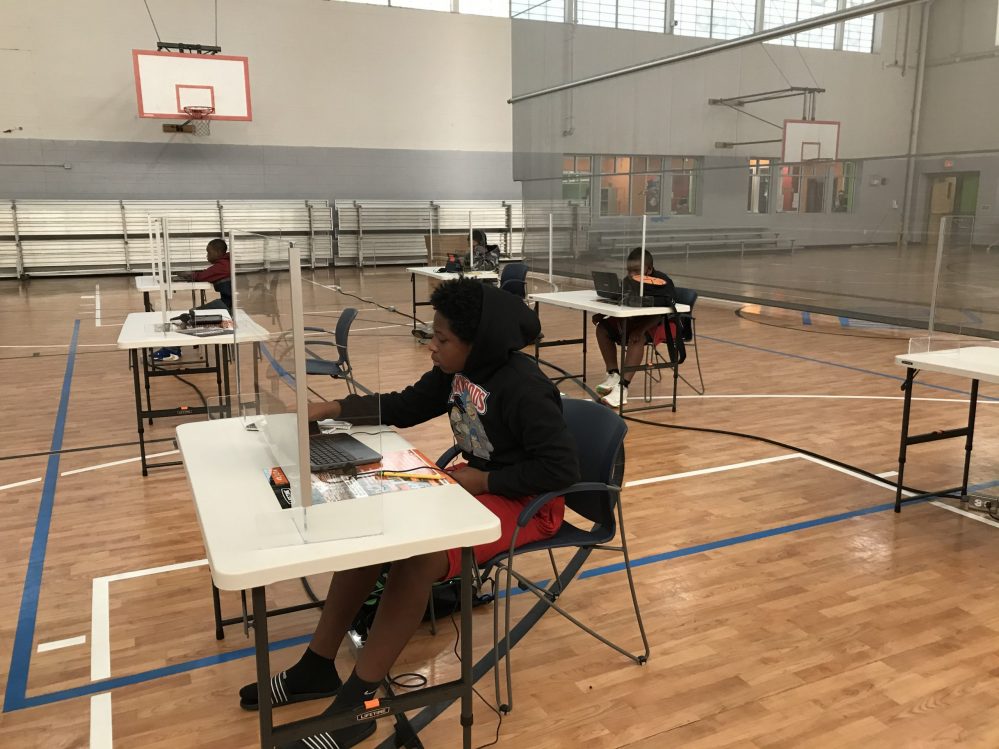 Students work on their online lessons in the gymnasium of the Broadway Avenue Boys and Girls Club in Cleveland. (Patrick O’Donnell)

But while he could act mostly as a proctor for kids that age, staff working with younger kids say they have to be more involved, even after the first-week struggles.

Morgan Everly, the club’s art instructor, said her job is easier this week than last week. But younger kids need help understanding instructions for their lessons.

“Some of the younger kids struggle with literacy so much that having to do it in a format where it’s self-taught, like they have to read their own directions, is really, really difficult,” she said. “It requires a lot of attention.”

Staff at the center at Urban Community School are seeing similar patterns, even in week two. Celeste Simcox said students now have more regular schedules and know teachers, but they still have trouble signing on to school learning websites and messaging programs or finding links to classes on the different applications teachers are using.

“You also want to make sure they’re not playing video games while Zooms are going on and that they’re paying attention,” Simcox said. “Otherwise kids are really staying on top of it, but I think it’s really important that they have adult guidance and adults with them to keep them on track.”