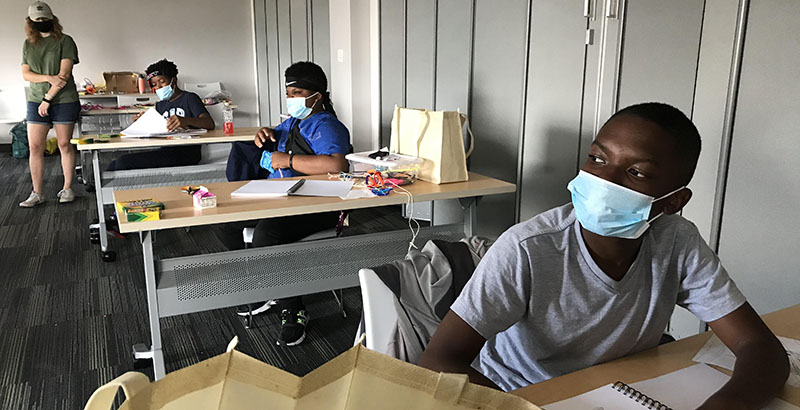 Students listen to instructions for a writing assignment at a summer school run by Open Doors Academy in Cleveland last week. The room layout and safety precautions are how fall “learning centers” with Open Doors could look. (Patrick O'Donnell)

The coronavirus may have closed school buildings in Cleveland for at least several weeks, but it’s not stopping nonprofits like the Boys and Girls Clubs or the YMCA from giving students a place to do their online lessons while their parents work.

The organizations are joining a growing movement in Cleveland and nationally to provide remote “learning centers” or “learning hubs.” They’re a key strategy in cities such as San Antonio, Denver and San Francisco and for statewide efforts like in Oklahoma to help kids connect to classes in broader ways than the learning “pods” affluent parents are setting up.

“Our mission is to provide support and programs to the kids that need us most,” said Jeff Scott, president of the Boys and Girls Clubs of Northeast Ohio. “Right now, our kids need us.”

Churches and afterschool officials said their programs are planning to open during school hours — often at no cost to families — and seat kids at socially distanced desks, usually about 10 to a room. The centers will hand out masks and sanitizer, feed students and provide Wi-Fi to do schoolwork.

When possible, afterschool sports, tutoring, theater, poetry, chess and other activities will be added to the mix. The result is part study hall, part summer camp, part child care and part afterschool program, all designed to be safe spaces where kids keep up with their online lessons while parents work.

Ana Thomas, vice president of youth development of the YMCA of Greater Cleveland, said families need a safe place for children to go while parents work. Most never expected to pay child care expenses during normal school days and can’t really afford those costs, she said, and students also need some interaction with other kids.

“We know this is the right thing to do for kids and their families,” she said.

Though some school districts across the country are opening for in-person classes, often sparking heated debates over masks and safety precautions, many have been planning for weeks to open with at least some days spent on online learning each week. As school approaches, more than half are choosing to open online-only, according to surveys by the Center on Reinventing Public Education and others.

The school closures have prompted some parents to create their own learning pods — small groups of kids from a few families who will gather for their own lessons, often with teachers hired by well-to-do parents.

The rise of these pods have raised concerns about equity issues between affluent families and those that dominate cities like Cleveland, where median family income is a little over $26,000 a year.

There are also higher-end learning centers starting, such as one at Cleveland’s science museum, the Great Lakes Science Center, where staff will help students navigating their schools’ online learning systems and provide science activities just like the center does at its summer camps.

It’s also $59 a day per child — too pricey for many Cleveland families, though the center hopes donations will let them offer scholarships to kids who need them.

“It’s not exactly going to fly for our families,” said John Zitzner, a co-founder of the Breakthrough charter school network in Cleveland. “That’s for suburban families who work downtown.”

Zitzner is opening up his 12 schools for “remote out-of-home learning” for students — a free service with lunch and Wi-Fi for students. He’s not sure how he will pay for it yet, or exactly who will staff it, but he’s committed to making it work. He’s talking with Open Doors Academy, a local nonprofit that already offers afterschool work at some of his schools, and the Boys and Girls Clubs about adding programs beyond being just “babysitters of kids on computers.”

Already, 350 of the 2,000 families with children enrolled in the schools have expressed interest, Zitzner said.

“I think it will grow,” Zitzner said, as families struggle to find child care. “I don’t think they have their heads around what it is yet. I think the closer we get to opening day, the more scrambling there will be with parents.”

The Cleveland school district, which aggressively partners with community groups to provide afterschool programs, has reached out to organizations across the city hoping many can host students during work hours. It has surveyed providers, asking who can take kids at their facilities and who can add enrichment programs at other locations. The hope is to release a list soon — the district won’t say when — of sites where parents can send their kids while at work.

The district has not committed to using any of its own school buildings yet, unlike Breakthrough. District CEO Eric Gordon did not respond to questions from The 74 about whether he would.

Gordon’s attempts to rally afterschool providers fits the pattern of other cities tapping any partners and assets they can to help kids, said Jen Rinehart, vice president of research and policy for the Afterschool Alliance, a national organization promoting afterschool programs for children.

“Schools need other partners to step in,” she said. “Certainly, it’s challenging, But it’s an opportunity to work together and co-create what a new learning day can look like.”

Money is one major challenge. As Rinehart noted, programs that traditionally operate just a few hours a day will now be open for as many as 10. That adds costs, so providers are seeking donors to help out.

The Afterschool Alliance is also lobbying Congress for aid in its next coronavirus relief package. A key part will be changing rules for federal aid for meals and child care, along with rules for federal 21st Century Community Learning Centers grants, to allow money to be used for school-day services, not just afterschool activities as the law mandates now.

Safety is a hurdle

Health risks from the virus are another major challenge, both for students and for staff.

In Cleveland, safety worries are keeping the Cleveland Public Library, which is usually a standby for kids without computers or home Wi-Fi to do homework, from taking in kids for school days. Director Felton Thomas is limiting visits and computer use to one hour because employees object to having kids there for longer.

“If the schools don’t feel safe, why should the library take it on?” Thomas said employees keep asking him.

But afterschool providers are not as worried. The number of kids will be much smaller than at a school. They can limit risks further by dividing kids into small groups that avoid contact with other groups. The Boys and Girls Clubs and YMCA also did summer camps to test out their safety precautions, which gives them confidence for the fall.

Open Doors Academy, which is still running summer school, offers a look at how it can work. All students and visitors must wear masks, though on a recent visit kids often let them down below their noses or to their chins when at their own desks. Staff take the temperature of everyone at the door, and everyone answers questions about whether they feel symptoms or have had contact with COVID carriers.

Inside a classroom at the program’s headquarters, tables are spaced six feet apart or more in rows along the outer walls. Students mostly keep to their own assigned space, even eating lunch there. They are usually masked, though masks slipping below noses and even below chins sometimes are not as big a worry, if students are in their assigned space.

“If we run sessions small enough and we follow our protocols … we feel really good about being able to run them effectively and give the kids what they need,” said Dorothy Moulthrop, Open Doors’ CEO.