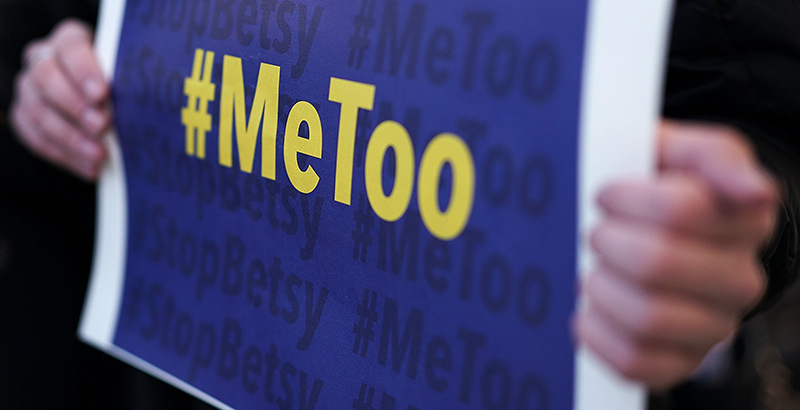 An activist holds a #MeToo sign during a news conference on a Title IX lawsuit outside the Department of Education Jan. 25, 2018 in Washington, D.C. (Alex Wong/Getty Images)

For two decades, Chicago Public Schools had no Title IX coordinator, meaning there was no one in charge of making sure that the nation’s third-largest school district didn’t botch sexual assault and harassment cases involving students. And the results of an extensive federal review, unveiled last week, showed what went wrong when no one was paying attention.

Sexual misconduct investigations by CPS often were never finished. The district regularly failed to provide any help — like counseling — to victims of sexualized attacks and harassment. When a female student said she was raped by a dozen teenagers, including seven male classmates, and asked the district to move her attackers to another school, her dean replied that “it would be easier” if she was the one who left the school instead.

Secretary of Education Betsy DeVos called CPS’s failures “widespread, glaring and heartbreaking,” while Kenneth Marcus, the top civil rights official at the department, said the district’s handling of sexual assault cases was “one of the worst” he’s seen among K-12 school districts.

“We cannot permit this to recur in Chicago or anywhere else,” Marcus told reporters last week, adding that “this case may be a wake-up call” for other K-12 schools.

While the damning findings against Chicago Public Schools were notable for their size, scope, and egregious nature, the district is not an anomaly. K-12 schools across the country have given short shrift to their Title IX coordinators — if they have them at all — and as a result are mishandling sexual violence cases. Experts were glad that the department put a spotlight on what CPS did wrong, but they wondered why it hasn’t done that in other cases, and they warn that these failures will continue if the federal government doesn’t keep calling out schools that violate Title IX.

“It’s not isolated to Chicago, but I don’t think the public really understands that,” said John Shields, a research scientist with ETR, a nonprofit that evaluates how schools deal with Title IX issues. He noted that when DeVos gave her only speech about Title IX, she focused on due process rights at the college level and never mentioned K-12 cases. “There is an opportunity for DeVos and the president to speak out on this issue,” Shields said.

It’s not that the U.S. Department of Education has just been blowing hot air. Under DeVos, the department has forced dozens of schools across the country to change how they deal with sexual assault cases after feds discovered Title IX violations, according to documents obtained by The 74. The department found that public schools in major cities like Detroit and Washington, D.C., had no investigation procedures under Title IX — even though it’s been 20 years since the Supreme Court ruled that the gender equity law requires schools to address sexual violence impacting students.

But the public — and those families with kids in these schools — often have no idea when the feds discover Title IX violations. That’s because under the Trump administration, the department stopped publicizing when it finds schools dropping the ball on Title IX. It changed its practice this month by putting out press releases and holding calls with reporters upon concluding probes into CPS and Michigan State University’s handling of Larry Nassar’s crimes.

“The problem with burying their decisions and making them difficult to access is, there is a general lack of awareness of using Title IX as a level to ensure your school is properly addressing these,” said Elizabeth Meyer, a University of Colorado Boulder professor. If the federal government made more public pronouncements when it finds Title IX violations, Meyer told The 74, “it would definitely raise the profile and awareness of what schools are supposed to be doing.”

Title IX typically falls low on the list of priorities for district administrators, Meyer said, so they aren’t going to spend time on it until they’re faced with a crisis or activism. In Meyer’s research, she found that sometimes Title IX coordinators don’t even know they’re the Title IX coordinator.

And it’s not just an issue for small districts with a limited number of administrators. While Chicago went two decades with no Title IX coordinator at all, the New York City Department of Education, the nation’s largest school district, had only one temporary coordinator for all 1.1 million students until this year. After teens protested at city hall — and following multiple lawsuits and news articles documenting failures during Mayor Bill de Blasio’s tenure — the city finally approved funding to hire more than one Title IX coordinator to oversee how its schools handle sexual misconduct.

“District bureaucracies have tremendous inertia,” said Joel Levin, co-founder of the advocacy group Stop Sexual Assaults in Schools. “And unless spurred by an adverse regulatory finding, lawsuit or bad press, [districts] will do little to improve their sexual misconduct training, policies and procedures.”

Many of the problems at CPS were detailed in a 2018 Chicago Tribune investigation. The government probe predated the articles by three years, but federal investigators were interested in knowing how the district responded to the articles internally, according to the Tribune. The district hired consultants to audit how it deals with these issues; they concluded that CPS “has not been effective in preventing and responding to sexual misconduct” and had problems “at all levels.”

In the 2018-19 school year, CPS allocated a $2.5 million budget for a new district Title IX office. The office has already documented more than 3,000 sexual misconduct incidents involving students and has investigated more than 500 cases on top of guiding 1,600 other school-based investigations, according to CPS records.

“It seems in this case, the only thing that spurred them to action was the Tribune’s exhaustive research and documenting all the ways they failed their students,” said Ashley Fretthold, a lawyer with Legal Aid Chicago who represented students in Title IX cases in the district. “I think parents and students and other community members need to ask these questions — What are you doing in response to these complaints?”

Meyer said parents could lay a lot of groundwork for improvements in this area before a scandal by simply calling their district office or writing the superintendent to ask basic questions like, “Who is our Title IX coordinator?”

“If we have lots of people calling and raising it to the attention of leaders,” Meyer said, “then it’s harder for them to ignore the issue.”