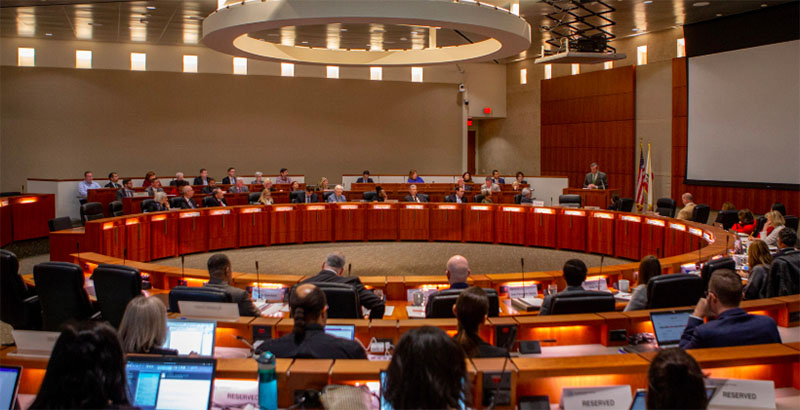 CSU Board of Trustees meet in their chamber. (CSU)

California State University overwhelmingly decided Wednesday to move forward with a new admissions requirement, but it will delay making formal alterations to state regulations until the consequences of the change are studied.

Until last week, the CSU Board of Trustees were expected to cast votes on Wednesday either green-lighting or rejecting a controversial addition to admissions standards: requiring applicants to take a fourth year of high school math/quantitative reasoning to be eligible to apply to the system’s 23 campuses. The change would go into effect in the fall of 2027, with the current class of fifth-graders.

Facing continued pushback from advocates and state officials, however, the CSU Chancellor’s Office last week put a “phased” option on the table. The new proposal asked trustees to approve the plan establishing the new requirement by fall 2027 but delayed a formal vote until spring 2022. That vote to amend the California Code of Regulations, which governs the university system, would follow a third-party independent analysis on how high schoolers’ access to the CSU would be impacted, particularly for low-income students of color.

State Superintendent Tony Thurmond, whose nearly nine-minute speech just before the vote captivated the chamber, supported adding the requirement while acknowledging the complexity of the situation. The CSU is the largest four-year public university system in the country, with about 481,000 students.

The implementation timeline can be “extended” or “halted” if the policy “is resulting in unintended consequences,” according to the proposal. It’s wasn’t clear what kind of consequences would be needed to delay the new requirement.

“We cannot accept that the disparities in preparation that exist today … must be the destiny” of marginalized students, said Loren Blanchard, CSU’s executive vice chancellor for Academic and Student Affairs, who helped present the proposal. He added: “Actions speak louder than words.”

The board of trustees’ educational policy committee approved the plan unanimously Wednesday morning. The full board passed it soon after, with 20 voting yes, one opposing and one abstaining.

As with past debates leading up to the vote, Wednesday’s discussions underscored a continuing schism among advocates and officials on how best to tackle educational inequity. Many districts, including L.A. Unified, already struggle with access to the CSU system. Less than half of the state’s Class of 2018 — about 41 percent — met CSU’s current eligibility standards, which require a C or better in three math courses: Algebra I, Geometry and Algebra II.

Speakers Wednesday expressed varying levels of confidence in the latest iteration of the proposal, though there seemed to be widespread support for having an independent analysis.

CSU officials and some trustees reiterated that a fourth-year math/quantitative reasoning course would expand marginalized students’ access to more rigorous coursework, especially those needed in more lucrative STEM-related fields. There are also benefits, they said, of taking quantitative-reasoning-based courses, such as personal finance, statistics and computer science, which center on problem-solving and critical thinking. The proposal lists 27 states with at least one “public comprehensive university” that has similar existing requirements.

A handful of trustees gave their express backing. “It’s just intuitive,” said trustee Jack McGrory. “Why don’t we want to make our students more successful by requiring four years [of math/quantitative reasoning]?” Another, Christopher Steinhauser, highlighted the success he’s seen in his own Long Beach district since it adopted a similar requirement about six years ago.

State Superintendent Thurmond later cautioned against what he saw as an oversimplification of the issue of inequity. “Let us not fool ourselves that just by doing this, we’ll close the gap.”

Across the aisle, some advocates Wednesday revived concerns that the change could block more black and Latino students from the CSU — especially those from low-income families — because of existing disparities in who has access to math and quantitative-reasoning-related courses. The statewide shortage of STEM teachers has also been a recurring talking point.

About 15 members of the public came forward prior to the vote to applaud the CSU’s decision to pump the brakes. A few continued to speak in opposition altogether.

“I truly appreciate the recognition that any change in admissions should meet a much higher bar of proof and evidence before making a change that affects all Californians,” said Michele Siqueiros, president of the Campaign for College Opportunity.

“While I believe that black and brown teens are capable of any and everything, one thing we must acknowledge is that if they are not being led and accepted into our institutions, then the system needs to take accountability for failing them, not the other way around,” a representative for Students for Quality Education at Cal State-LA added.

CSU officials have stressed that there will be multiple ways to satisfy the requirement, including taking a math, science or quantitative reasoning course, taking certain Career and Technical Education classes or pursuing dual enrollment courses at a local community college. The CSU intends to form a “steering” committee for stakeholders to give ongoing feedback, and it will work with pre-K-12 districts to expand curricula in subjects that align with the requirement, according to the proposal. The system also committed $10 million over the next four years to double the number of STEM teachers that the CSU produces.

There would be an automatic exemption provided “during the initial implementation of the requirement” for students with course limitations at their high schools, the proposal states.

“I’m not yet convinced when we make the assertion that quantitative skills [in high school] is going to close the equity gap,” said trustee Silas Abrego. “The issues of closing the equity gap are not based on one year of quantitative reasoning skills.”

Trustee Lillian Kimbell questioned districts’ capacity — and even their willingness — to meet the requirement. She mentioned L.A. Unified in particular. “At the end of the day, I don’t know that we have the power to make L.A. Unified school district, the largest school district in California, provide the courses students will need,” she said.

The 74’s own analysis in November found that less than a quarter of seniors at L.A. Unified took a fourth-year math/quantitative reasoning course in 2018-19. An estimated 46 percent of the district’s Class of 2019 met current CSU admissions requirements.

“I commend and thank the chancellor and Cal State Board of Trustees for responding thoughtfully to our community of children and youth advocates. We are partners in preparing our young people for career and life,” a staffer speaking for L.A. Unified school board member Mónica García told trustees Wednesday. García co-sponsored a resolution last June opposing the CSU proposal.

The chancellor will submit a progress report to the board in March 2021, and then a final report by January 2022 that will include the findings from the independent analysis, where the CSU stands on growing the number of qualified STEM teachers, and steps taken to increase awareness on the new requirement across communities, among other things.

For more of our coverage: