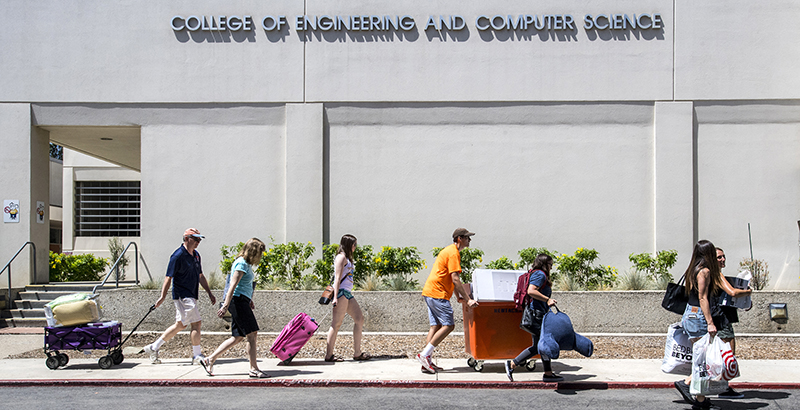 The California State University system this week is considering a new admissions requirement for incoming freshmen — a development that’s sparked opposition from L.A. Unified, a district where less than half of the prospective graduates are eligible to apply under current standards.

CSU’s Board of Trustees on Tuesday will review an informal proposal to add a fourth year of “quantitative reasoning” to admissions requirements across the system’s 23 campuses. A quantitative reasoning course largely centers on problem-solving using math-based skills; a high-level math class, certain science courses or an elective with “a quantitative reasoning foundation,” such as statistics and personal finance, could all qualify, according to the proposal. Three high school math courses— Algebra I, Geometry and Algebra II — are already a must for CSU admissions.

System advocates say the extra prerequisite, which wouldn’t be implemented until 2026, would ensure that more students build a strong learning foundation before college and have a wider array of career opportunities. Some other public university systems, such as Arizona State and Texas State, have adopted a similar requirement.

CSU is “the people’s university, and we want to provide as many options as possible,” said Susan Holl, a mechanical engineering professor at the Sacramento campus and chair of the CSU Academic Senate committee that has proposed the change. “We’re trying to fling the doors wide, bring everyone in and say, ‘You can do this.’”

There would be exemptions in certain scenarios, the proposal states. The University of California system, which is already more selective, is not a part of the proposal.

L.A. Unified and various advocates, however, view the move as a threat to equity rather than a vehicle for opportunity. The district school board rejected the idea outright in a June 18 resolution, stating that L.A Unified does not have the teaching capacity to meet the requirement. Officials said they also fear that adding another prerequisite would further restrict college access for minority students, who already face pervasive equity gaps in school.

As a state, “we haven’t made the investment [in students and schools]. And to move the goalpost is something that we object to,” board member Mónica García, who authored the resolution, told board members.

In-state schools like CSU — the state’s largest public university system — are a popular option for California students. About 1 in 6 L.A. Unified graduates enrolled there in 2018, according to third-party data provided by the district. But access isn’t universal.

Less than half of L.A. Unified’s class of 2019 cohort — a projected 46 percent of more than 34,000 students— are eligible for the current CSU system, according to a district spending plan updated on June 28. A cohort refers to the number of students who entered as freshmen four years ago and should be on track to graduate, though not all are.

The latest projection marks a drop from the 50 percent estimated in June 18 board meeting materials. If the percentage estimate holds, it would drag L.A. Unified’s progress back to 2016-17 levels. LAUSD is still above the statewide average, with about 43 percent of the class of 2018 cohort eligible for CSU system schools.

The district declined to explain the percentage drop. It cited a pending legal complaint filed with the state education department July 11 on behalf of two parents demanding more district transparency on how more than $1 billion in state funding allocated annually for high-needs students is being spent.

Tuesday’s CSU trustees’ meeting, which will be live-streamed here starting at 10 a.m., is for discussion only. A public hearing is scheduled for Aug. 29, with a vote on the measure not expected until November. Advocacy organizations like The Education Trust-West said they’re going to keep a close watch to make sure the proposed change is fully vetted.

“What they’re proposing would be a serious and pretty substantial addition,” said Elisha Smith Arrillaga, Ed Trust-West’s executive director. “It’s really important to be sure the details of the proposal, and the impact it would have, are publicly discussed.”

‘I don’t know that we are necessarily prepared’

At the June 18 board meeting, then-Chief Academic Officer Frances Gibson raised doubts about the district’s capacity to respond when asked about the proposed CSU requirement.

While L.A. Unified does offer an optional fourth year of math/quantitative reasoning at all traditional high schools, “I don’t know that we are necessarily prepared” to teach a fourth year to all students, said Gibson, who stepped down from her position last month. She cited “the staffing requirements, the partnership requirements” that would be needed to “move forward elegantly.”

The district was unable to provide data before publication on how many of its 92 traditional high schools have the staffing and resources to teach all students a fourth year of math/quantitative reasoning. About 71 percent of L.A. Unified’s 56 alternative and continuation high schools do not have any students enrolled in a fourth year, according to district data.

Board member Jackie Goldberg told LA School Report that a large concern for her is the acute shortage of STEM teachers statewide. “I don’t know if we have enough math teachers,” Goldberg said. “I know we’d make every effort, but that’s been a struggle for us, period, having nothing to do with a fourth year [requirement].”

L.A. Unified has “no resources identified to fund any additional costs” associated with the CSU proposal, according to a budget impact document. The district is struggling financially, losing a recent bid for a $500 million annual parcel tax and finalizing a controversial last-minute budget that sidestepped a potential county takeover.

Considering these limitations, the proposal “seems a bit tone-deaf,” now-former student board member Tyler Okeke told board members. “I think that ideally [the bar should be raised for students] … but we don’t have the resources to support that at this moment.”

Holl emphasized the six-year transition period should the proposal pass.

“What we’ve done is try to put on notice all the school districts that we are there to help them,” she said. “We have a really long lead time.”

Holl said CSU would bear responsibility for ensuring that districts are ready to meet the new standard. The system would help districts craft their curriculum and provide professional development assistance, for example. CSU “is also working to meet the ongoing need for additional teachers in STEM fields,” according to the proposal.

Even then, there would be an exemption “for any student who could not fulfill the requirement because of a lack of resources at their high school,” the proposal states. Some Career and Technical Education courses or appropriate dual enrollment courses at a local community college could also be used to meet the requirement.

Advocates like Ed Trust-West’s Arrillaga are leery of waivers, however, because it’s “an acknowledgment that there are inequities in the system” that have yet to be addressed.

“For us, it’s a really problematic and troubling response,” Arrillaga said.

Holl sees a new requirement as “180 degrees from limiting access” for students.

Part of closing the equity gap, she said, is increasing students’ access to coursework that could spark and nurture career interests. There are disparities in access as is: 65 percent of African-American students and 76 percent of Latino students coming into the CSU system have taken four or more years of math, for example, compared with 80 percent of white peers and 84 percent of Asian peers. 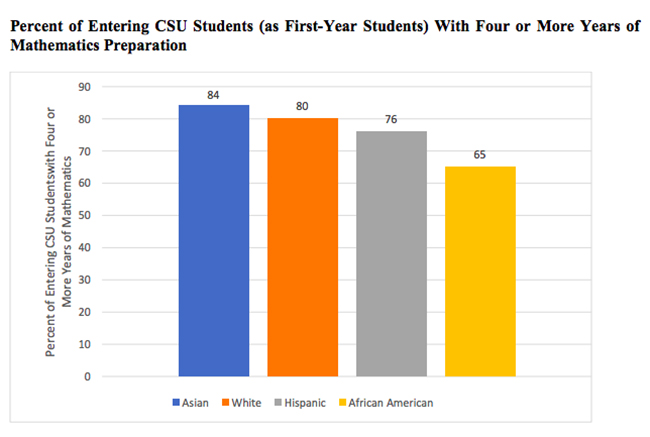 There is proof of success in at least one California district: Long Beach Unified. The district implemented a mandated fourth year of quantitative reasoning six years ago and has seen a hike in student eligibility for the CSU and UC systems from 39 percent to 56 percent.

“It was like [the saying], ‘The rising tide lifts all boats,’” Holl said. “When you raise expectations, these students are amazing.”

‘There are too many barriers’

Advocates agree that students are tenacious and rise to the challenge. But many, like Linda Vasquez of the Campaign for College Opportunity, worry that a new requirement would “erode” the gains made so far in expanding college access.

“Every time [students] meet [universities’] standards, our universities raise the bar on them,” Vasquez, the campaign’s senior public affairs director, told the board last month.

Starting with the class of 2016, L.A. Unified’s curriculum is fully aligned with CSU and UC system admissions requirements. This means all students have to take 15 “A-G” college preparation courses — English, math, science, foreign language and other core electives — to graduate. About 51 percent of California districts similarly mandated A-G completion as of 2017, according to the Public Policy Institute of California.

The needle has moved incrementally as a result. In 2011, before the realignment, only 26 percent of L.A. Unified students were on track to meet CSU and UC eligibility standards. By 2016-17, 46 percent of students who entered that graduating class as freshmen and 60 percent of those who actually did graduate qualified. In 2017-18, those figures inched up to 47.9 percent and 61.9 percent, respectively.

It remains unclear whether progress backslid in 2018-19. District spokeswoman Shannon Haber confirmed that the 46 percent for the class of 2019 cohort is the latest and most accurate estimate.

L.A. Unified enrollment in CSU schools has increased overall, too. About 16 percent of district graduates in 2018 went to CSU system schools, up from about 12.5 percent in 2014, according to the National Student Clearinghouse, a nonprofit that collects data from colleges and universities.

But it’s still far from where the district wants to be.

The district remains well below its goal of 100 percent of graduates being eligible for the CSU and UC systems by 2023. And there are still gaping disparities in college readiness across student groups, especially among foster youth, English learners and students with disabilities.

“Most students think that they’re able to graduate from high school and think, ‘If I’m graduating high school, I should be able to go to college,’” said Desiree Martinez, a former L.A. Unified student and associate director of organizing for Students for Education Reform LA. “Then, senior year, it’s devastating to find out that’s not the case.”

That reality is reason enough to hit pause, said Jennifer Cano, director of education programs and policy at United Way of Greater Los Angeles. United Way is a district partner in college-readiness initiatives.

“There are enough barriers to having kids emerge college and career ready, A-G ready, as is,” she said. “So until we see improvements there and a steadier pipeline in, it wouldn’t be wise.”

For Holl, it seems to boil down to people having the same end goal but different paths for getting there.

“Change is hard for people,” she said. “It makes people fearful because what we’re proposing is a different way of creating access, I think.”