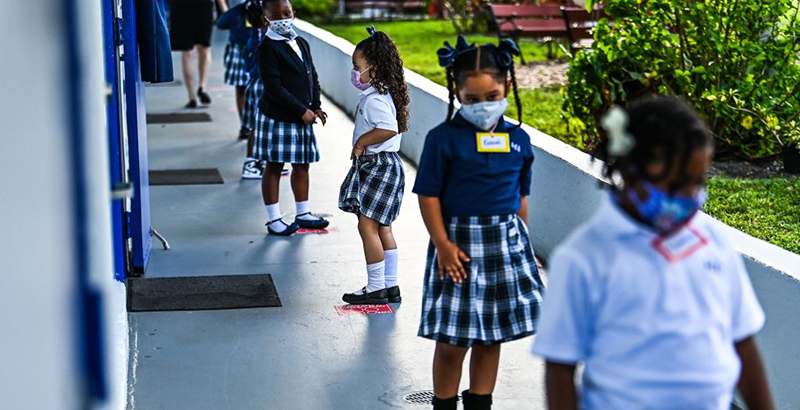 An update to CDC quarantine guidelines exempts students from self-isolation if both they and the infected student were properly masked. The change is pushing some districts to require face coverings. (Chandan Khanna / Getty Images)

Some key absences complicated the return to school in Wayne Township, Indiana: 461 to be exact.

After just eight days in classrooms, 37 positive coronavirus cases in the 16,000-student district outside Indianapolis had triggered hundreds of student quarantines, forcing young people to miss out on classes and extracurriculars.

Superintendent Jeff Butts knew he had to act fast. The district had begun the year mask optional in late July. But in early August, he stumbled on a solution, hidden in plain sight: The Centers for Disease Control and Prevention had just updated its guidance, exempting students from self-isolation if they and the infected student were properly masked and spaced at least 3 feet apart.

“That was my biggest tipping point, quite frankly, when the CDC came out and made that change,” Butts told The 74. “I realized that if we had all of our children in masks … I can quarantine fewer children.”

But not everyone got the message. It doesn’t appear that the guidance trickled down to many other school systems, where most policies remain stricter than the CDC demands, according to a recent survey of 100 districts from the University of Washington’s Center for Reinventing Public Education. One reason for the disconnect is that CDC made little attempt to billboard the policy shift, which only appears in an appendix on case investigation and tracing updated Aug. 5.

“It’s buried in some appendix to the close contact definition,” Emily Oster, Brown University economist who has tracked schooling through the pandemic, told The 74. Under many school systems’ quarantine protocols, spending 15 minutes within a six foot radius of an infected individual — sitting next to them in class, for example — can force students to stay home for up to two weeks. The new exemption allows schools to bypass that rule in cases where both individuals mask up.

Across the country, as school leaders struggle with quarantine totals that are stretching into the thousands just weeks after schools opened their doors, the new masking exemption to self-isolation guidelines, could help districts sidestep chaotic reopenings amid divisive politics surrounding the use of masks. 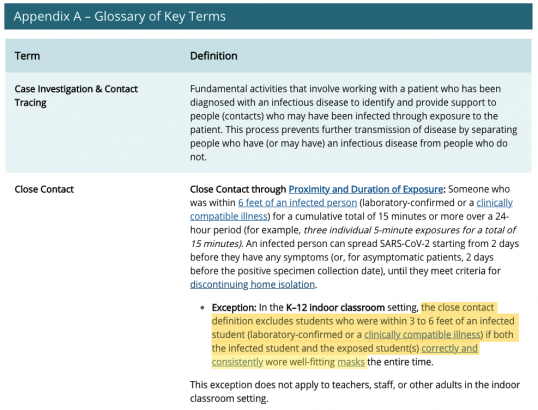 (Centers for Disease Control and Prevention)

In the past week across the country, New Orleans School District quarantined over 3,000 students and staff after 299 recorded COVID cases. Mississippi has 20,000 students staying home for isolation statewide, an official announced. And a district in Texas shut down due to outbreaks among school staff. Meanwhile, Texas — among other states like Florida, Arkansas and Arizona — maintains a ban on mask mandates, though school systems like those in Dallas and Miami are requiring face coverings in defiance of the ban.

The CDC did not respond to The 74’s request for an explanation of why the update wasn’t publicized more widely. But Oster, the Brown economist, said it’s possible that when the CDC updated the definition of close contact for quarantining, “they didn’t realize how important it would be for school guidance,” and thus didn’t heavily broadcast the change.

At the very least, it’s clear the hidden clause gives districts a “huge incentive to have everybody mask,” Oster said.

As of Aug. 11, all students and faculty in Wayne Township are now required to wear face coverings. Site leaders have told Butts that the district is already seeing fewer quarantines, though the superintendent said he doesn’t yet have this week’s numbers.

Wayne Township is not the only locale to pull the trigger on face coverings in response to skyrocketing COVID absences. Elsewhere in Indiana, Greater Clark County Schools adopted a universal masking rule on Aug. 7 after some 70 COVID cases spurred over 1,100 student quarantines. In Arkansas, the Marion schools superintendent mourned that the state-level ban on mask mandates had caused a nearly twenty-fold increase in students missing class due to COVID exposures in his district. And in Ohio, in an effort to avoid the fate of mass quarantines, Lakota Local Schools outside Cincinnati announced a last minute policy change on Monday to require masks, just two days before students returned to classrooms.

“Because we want to keep our kids in school all year long, just like we did last year, we made a decision this weekend to move to masks,” Superintendent Matt Miller told The 74.

Where school systems have the latitude to set their own face covering rules, “all these school districts are probably going to go to masks because there’s too much COVID right now,” said Dennis Roche, co-founder of the website Burbio, which has tracked school policy through the pandemic.

Utah school quarantine rules, like CDC guidance, exempt students from self-isolation if both they and the infected student were properly masked. (coronavirus.utah.gov)

While exposure to infected individuals often keeps large numbers of students home from school, very few students in isolation actually turn out to contract the virus themselves, Oster noted. Having a rule that allows healthy students to avoid missing class is crucial, she said.

“The quarantine itself is tremendously disruptive. And so I think that having an off ramp or a way to make it possible for people not to have to quarantine after an exposure is just huge for generating a functioning school system.”

As Delta variant COVID cases continue to surge, allowing students to come to school without masks and spread the virus is inexcusable, said Dan Domenech, executive director of the School Superintendents Association.

“If you have to now quarantine a student because they’ve been exposed to somebody because nobody was wearing a mask, that’s a problem,” he told The 74. “From a logistical point of view, the easiest thing to do is to say everybody needs to wear a mask.”

Despite the potentially large implications for schools’ daily operations, there was “not much emphasis” on the CDC’s policy change, said Domenech — meaning many districts may still be struggling to catch up.

From a public health perspective, the move aligns with what Phil Chan, medical director for the Rhode Island Department of Health, says are the best practices to prevent the spread of COVID.

“Where we are with our case transmission rates across the country… I think [masking] makes all the sense in the world,” he told The 74. It’s “the bare minimum we should be doing at this time.”

Still, in his home state, face covering policies in school are “all over the map,” he said, which he fears could spell unnecessary COVID spread and lost learning.

Last week in Georgia, for example, four school districts — some of which had mask-optional policies — switched to virtual instruction days after the school year began due to COVID outbreaks.