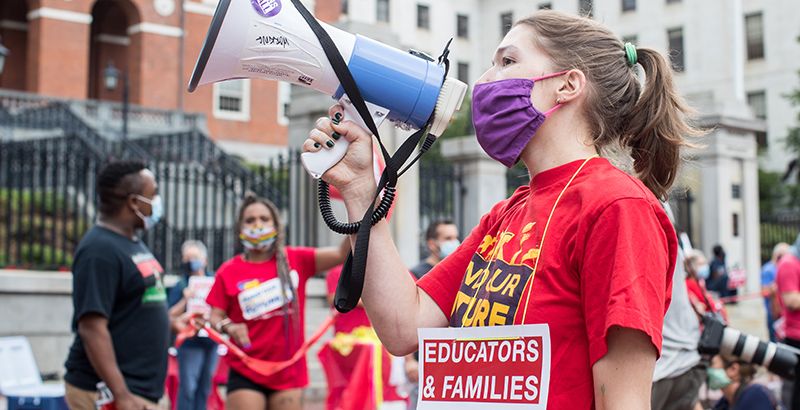 A participant chants during protest organized by the American Federation of Teachers on Aug. 19 in Boston, Massachusetts. The group called for a uniform requirement for all districts to start the school year with a comprehensive distance-learning plan as well as clear health and safety standards that must be met for the gradual return of in-person learning. (Scott Eisen / Getty Images)

The American Federation of Teachers recently made headlines when it passed a resolution expressing support for any chapter that wishes to strike over schools reopening. Since then, there have been increased rumblings about possible strikes in a number of states.

I sympathize with teachers who are afraid to return to work, especially those who are not using the threat of strikes to achieve political goals, as some unions have done. I feel for school administrators having to make tough decisions about student and staff safety.

But if schools don’t reopen, whether because of a strike or a state or district decision, the taxpayer money that funds those schools should go to the impacted students and families.

A recent nationwide poll of 1,000 parents of K-12 children commissioned by State Policy Network showed that in the spring, during school shutdowns, families spent on average $200 total and 10 hours a week supporting their children’s education.

It also revealed that 40 percent of parents believe their children are behind academically because of those school closures.

America cannot afford to have children fall further behind as we ride out this pandemic, and families can’t afford to continue subsidizing their children’s education like they did this spring.

Districts are announcing new closures and delayed starts every day, and parents are still grappling with whether they feel safe sending their kids back to their schools (the same poll showed only one-third to be comfortable under current conditions). As a result, some parents have turned to ideas like learning pods, where a handful of families team up to hire a teacher together or share the responsibility of homeschooling.

As this entrepreneurial idea has taken hold, and as mom Facebook groups are exploding with ideas about pods and requests to join, some have rightly questioned how equitable this is. What happens to students whose parents don’t have the financial means to hire a teacher? Or who have working parents who can’t help homeschool?

The answer has been around for nearly 10 years. It’s been tested and implemented, and all we need to do is act.

Education savings accounts (ESAs), first passed in Arizona in 2011, allow families to spend a portion of their child’s state education funding on qualifying education expenses. This could be used for homeschooling, online tutoring or even chipping in to hire a teacher for a neighborhood learning pod.

Support for this idea is high, with 63 percent of parents in the poll saying they support passing “emergency” or “pandemic” ESAs and 35 percent saying they would be very or extremely likely to use a program like this if available in their state.

The challenge will be how to make ESAs a reality fast enough for families. Historically, states have taken a year or more to implement these programs once they’re passed into law. Families don’t have that kind of time right now.

But there are other ways. One example is using CARES Act funding. In South Carolina, Gov. Henry McMaster recently announced a $32 million SAFE Grants program to give low-income families up to $6,500 to fund their child’s education. As every governor has discretion to use education funds under the CARES Act, there’s no reason other states could not follow suit and direct this money to families as an ESA instead of a grant program.

States could also use special sessions to pass one-time emergency or pandemic ESAs to give a portion of each student’s funding back to the families.

Every parent of school-age children in the country has tough decisions to make as we head into the fall. As a working mom with two kids and another on the way, I empathize greatly with what parents are going through right now. We have to adjust public policy to meet these needs and lighten the burden families are facing. Now is the time to be bold and act quickly, lest we lose another year of education for millions of students.

And as someone who works in education policy, I know that we cannot afford to lose another year — or even a half year — with our children’s learning. Achievement gaps will widen further and too many kids will fall behind, especially in low-income and underserved areas. Every family, regardless of their means, should have the ability to choose the education path that is right for their child, especially this year.

So, teachers unions: Go ahead and strike. School districts: Go ahead and decide not to open. You may have legitimate health reasons for doing so. But don’t be surprised when there’s a groundswell of parents asking for their money back.

Katherine Kellett Bathgate is a senior policy adviser for State Policy Network, the CEO and a co-founder of SchoolForward, and a mother of two.

Submit a Letter to the Editor
September 7, 2020

Katherine Kellett Bathgate is a senior policy adviser for State Policy Network, the CEO and co-founder of SchoolForward, and a mother of two.