As Teachers in Los Angeles Strike, the City’s School District Is Warned That It Could Lose Control of Its Finances If It Agrees to a New Contract That Depletes Reserves 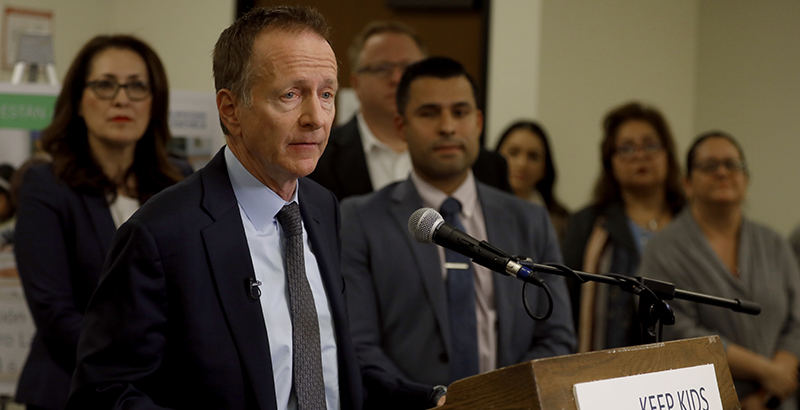 L.A. Unified could lose control of its finances if it signs off on a heftier contract agreement with its teachers union that drains its reserves past the mandated minimum level, County Superintendent of Schools Debra Duardo told LA School Report.

“If [L.A. Unified and UTLA] did come to an agreement that was going to put them so much more in the red, then [district officials] would have to show us — and [I’m] not saying they can’t negotiate a higher rate — they just need to show us what cuts they’re going to make” to meet minimum reserve requirements, she said. Otherwise, the school board and its superintendent could lose financial decision-making power, and a county-appointed adviser would have the power to invalidate any prospective labor contract.

The county announced Wednesday that it is sending a team of fiscal experts to the district “immediately” to help craft a new Fiscal Stabilization Plan after L.A. Unified’s updated December budget showed reserve levels at 0.96 percent of its total expenditures in 2020-21. California school districts must submit budget updates twice a year to their county office of education outlining their financial projections for three years; in these updates, minimum reserve levels must sit at 1 percent or more of the district’s total expenditures. If not, county overseers are required to step in. L.A. Unified projects its reserve for 2020-21 at $70.8 million. It needs to be at about $75 million to hit that 1 percent marker.

Duardo said the team will likely be four people, led by L.A. Unified’s former chief operating officer Jim Morris, arriving at L.A. Unified next week. She noted they will only play an advisory role and would “absolutely not” be involved in contract negotiations with United Teachers Los Angeles.

“They’ll be in the district [full time] and sitting down with [officials], starting with reviewing their current budget, looking at their current fiscal stabilization plan, and working with them on a daily basis,” Duardo said. “They’ll be there hands-on, not just popping in and out.” The new Fiscal Stabilization Plan is due to the county Office of Education by March 18.

If that report “doesn’t meet our expectations,” Duardo said — or if L.A. Unified reaches an agreement with UTLA and can’t account for a 1 percent reserve for 2020-21 — “we can [decide to install a fiscal adviser] in a matter of days.” Duardo refrained from expanding on what kind of cuts she would like to see to the district’s budget.

A county-appointed fiscal adviser would have “stay and rescind power,” meaning he or she could rewrite budgets and overturn school board decisions. A fiscal adviser can also “stop [labor agreements] that are upcoming,” L.A. Unified’s chief financial officer, Scott Price, told LA School Report in August. “There’s quite a bit of power that a financial adviser has.”

Imposing a fiscal adviser would be the county’s last step, with a state takeover being the last resort to restore the district’s financial stability.

Duardo emphasized that while it’s the county’s job to ensure districts “are fiscally sound and healthy,” a takeover isn’t the end goal. “We’re hoping that the fiscal experts can go in there and be able to work with the district … and be able to come up with a plan that we’re satisfied with,” she said. The county installed an adviser at neighboring Montebello Unified School District in November 2017 after a state audit found poor financial management.

The county’s timing with the announcement, however — it came the day before the initial Jan. 10 strike date — has fueled union allegations that the county is politically aligned with the district and sheltering it during the negotiations process. UTLA accused the district in December of writing county chief financial officer Candi Clark’s statements to L.A. Unified in August that warned of the district’s impending fiscal insolvency.

Duardo told LA School Report it “was very upsetting for us to hear people making those types of allegations because it’s absolutely not true. …We’ve been working with LAUSD and had concerns with their budget for years.” Nick Schweizer, California’s deputy superintendent of public instruction, joined Clark at her second appearance before the L.A. Unified school board a month later, in September, backing up her warnings.

‘LAUSD Is Not Too Big to Fail’: School Board Alarmed by Dire Financial Projections — and Warning of Possible ‘Fiscal Adviser’

Addressing the timing of the county’s decision to step in, Duardo explained that under state education code, the county had 30 days — equating to a Jan. 14 deadline — to respond to L.A. Unified after the district submitted its Fiscal Stabilization Plan in mid-December. She added that with strike-related news in constant flux, the particular day of the county’s announcement shouldn’t carry any weight.

“I know when things get heated sometimes people can get suspicious or get more sensitive,” she said. “But we’re just doing what we do with every other one of our 80 districts in keeping with the timeline for ed code.”

The union is set to strike on Monday. It rejected a new contract offer Friday from the district and refused to continue negotiations.

“We are extremely disappointed that United Teachers Los Angeles (UTLA) has rejected Los Angeles Unified’s revised offer without proposing any counter offer,” a district news release stated. “UTLA has refused to continue contract negotiations. More than 48 hours remain until Monday when UTLA plans to strike, and we implore UTLA to reconsider. A strike will harm the students, families and communities we serve, and we have a responsibility to resolve the situation without a strike.”

The district had presented its revised offer at a news conference Friday allotting $130 million to reduce class sizes and hire almost 1,200 more nurses, counselors, and librarians — up from its Monday offer of $105 million and its earlier offer of $30 million. The salary offer was unchanged, with the district proposing a 3 percent raise retroactive to 2017-18 and a 3 percent raise for this year with “no contingencies.” (Read the changes here.)

“This represents the best we can do, recognizing that it is our obligation to provide as much resources as possible to support our students in each and every one of our schools,” Superintendent Austin Beutner said Friday. He added separately, “If they want a strike, they’ll have a strike. But we’re doing everything we can to avoid it. We don’t want it.”

The district is “formally asking [Gov. Gavin Newsom] to get involved,” he told reporters. “We need him to step in, bring the parties together; keep us in a room, lock the door and throw away the key if he has to.”

The district’s new offer followed the release of Newsom’s proposed budget, which includes a one-time $3 billion sum toward pension relief and a $2.8 billion boost to annual K-12 spending. That proposal would add more than $40 million to L.A. Unified’s general fund, a district spokeswoman wrote in an email to LA School Report. Beutner said Friday the district is also eyeing $10 million in county funding for mental health professionals and nurses.

UTLA officials said in a news conference that L.A. Unified had unveiled its new proposal to the media before the union and that Beutner did not show up to the negotiations.

Union leadership has remained dug in on the demand for a 6.5 percent annual raise retroactive to 2016-17, largely on the grounds that L.A. Unified is simultaneously attempting to delay new employees’ eligibility for lifetime health care benefits. It’s also decried that the additional funding for staff hires is only for next year.

The county warned in its Wednesday letter that it does not “view any potential one-time revenues from the State as an ongoing solution.” A reported 86 percent of new spending in Newsom’s proposal are one-time investments, and the new governor has expressed wanting to invest more in expanding early education. The proposed funding also isn’t guaranteed — the budget has to be approved by the state legislature and won’t be adopted until June — and newly retired Gov. Jerry Brown reports that the state may already be in a recession.

Rather than relying on Sacramento, the county in its statement Wednesday called for erasing the district’s annual deficit. L.A. Unified spends about $500 million more a year than it gets and is hemorrhaging money because of declining student enrollment, a stubborn attendance problem, growing employer pension contribution rates, and free lifetime health benefits for all employees, retirees, and dependents.

The district estimates that half of L.A. Unified’s budget, which was $7.5 billion this year, will be spent on health care and pensions by 2031-32.

Moody’s Investors Service, touching on these points, wrote in a report that although a strike “is unlikely to have a significant financial impact on the district, the parties’ inability to reach an agreement adds to lingering credit negative challenges for LAUSD.”