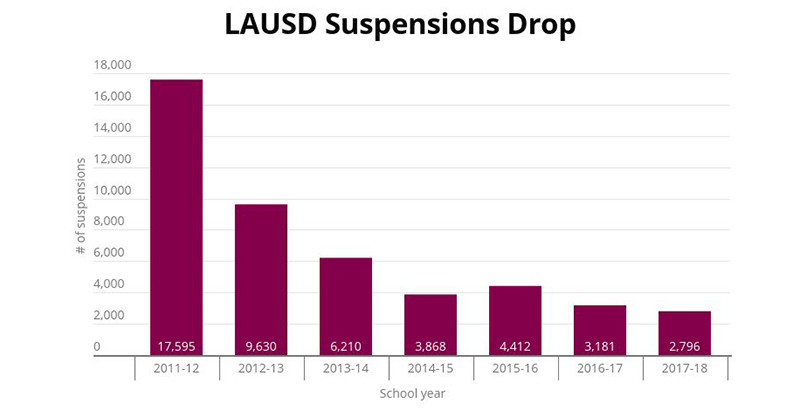 As California this month expanded a statewide ban on suspending younger students for defiant behavior, lessons on how this increasingly sweeping school discipline reform may play out can be found in Los Angeles, which barred such suspensions on an even broader scale six years ago.

Previously in California, “willful defiance” suspensions were not permitted in grades K-3. Beginning in July 2020, under the new state law, they will be prohibited for students in both traditional and charter schools from kindergarten to eighth grade. Expanding the suspension ban to the older grades was contentious, as was the use of the subjective term “willful defiance,” defined in state code as “disrupt[ing] school activities or otherwise willfully def[ying]” authority. It can include using a cell phone in class, wearing a hat and even chewing bubble gum.

Los Angeles Unified was the first California district to ban suspensions for disruptive behavior in 2013 and did so in an even more comprehensive way, covering all public schools in grades K-12. Local officials and advocates reflecting this week on the district’s policy shift six years later called it “a huge step” forward in reforming school discipline. They touted a drastic drop in suspensions — a more than sixfold decrease in district schools between 2011-12 and 2017-18 alone — resulting in thousands more instructional days for students. This is especially notable for students of color and those with disabilities, who have historically been disproportionately suspended in school.

“We have come far with tackling school discipline, moving away from punitive consequences and treating our students with respect, love and compassion,” school board member Mónica García, who led the formal proposal for the ban, wrote in a Sept. 12 email.

But advocates added that it is just that: a step. The larger “culture shift” away from school discipline and toward de-escalation and positive interventions, they said, is still very much a work in progress. The district in 2018-19 set aside more than five times as much funding for school police as for restorative justice programming in its $7.5 billion operating budget. And racial disparities in suspensions have remained — widened, in cases — since the ban passed, according to state education department data.

“LAUSD has to do more,” said Amir Whitaker, a staff attorney with ACLU of Southern California. “We just have to see more priority in support for the students.”

Advocates all cited the ban’s principal victory as the drop in suspensions and the corresponding hike in instructional days for marginalized students.

A year before the ban, in 2011-12, L.A. Unified doled out 17,595 suspensions at district schools— more than a quarter of which were for “willful defiance,” according to education department data. By 2017-18, the most recent year of verified state data, that total had plummeted to 2,796.

“The district has made tons of progress” when looking at those numbers, said Victor Leung, senior staff attorney with ACLU SoCal. “The ban really did its job in dramatically reducing the number of suspensions throughout the district.”

Suspensions at charters within L.A. Unified boundaries also dropped, from 8,974 in 2011-12 to 3,627 in 2017-18, although these schools continue to suspend students at a higher rate than traditional schools — about 2.3 percent versus 0.6 percent, respectively.

Suspensions cost students learning days, which research shows can hinder their academic achievement and increase their chances of dropping out. And marginalized students — black and brown students and those with disabilities — often pay the highest price. The year before the ban passed, black pupils at L.A. Unified were losing about 25.5 instructional days to suspensions per 100 students. Despite making up about 9 percent of the district population, they represented 28.6 percent of those being suspended.

The math now tallies to about 4 days lost per 100 black students — a heartening development for equity advocates like Aurea Montes-Rodriguez.

“Students are staying in school, which puts them in a much stronger position to have an opportunity to complete, and be successful in, their academic experience,” said Montes-Rodriguez, executive vice president of Community Coalition, one of the central advocacy groups that campaigned for the 2013 ban.

Similar to the debate surrounding the statewide measure, there were early concerns in L.A. that eliminating these suspensions would embolden unruly students and disrupt classroom instruction for other students. Current board president Richard Vladovic had supported the ban as an experiment, saying in 2013 he would be “the first to stop it” if it proved disruptive to learning. Vladovic was unavailable for comment this week. The local teachers union also didn’t respond to LA School Report’s request for comment. Its parent organization, the influential California Teachers Association, hasn’t affirmatively supported or opposed the latest state-level ban, though it has said that suspensions should be used as a last resort and that districts must provide sufficient resources for alternative discipline programs.

One student from Garfield High School in East Los Angeles told the school board at a July 2 meeting that he’d seen improvements in school climate since the ban passed.

“As a student, I feel that the school environment has changed,” he said. “I feel it’s changed for the better. I feel it’s become safer for students; they no longer have to fear about penalties for superficial infractions: wearing a hat, chewing gum, having earbuds in. Instead of punishing them and taking time away from their education, students are allowed to stay in class.”

The percentage of middle and high schoolers feeling some degree of safety in L.A. Unified schools was about 90 percent in 2018-19, according to the district’s annual school experience survey — the highest it’s been in at least seven years.

At the July 2 meeting, the board passed a resolution backing the state’s expansion of the ban, which is now permanent for grades K-5 and runs through 2025 for grades 6-8. Last week, Superintendent Austin Beutner also voiced his support for the statewide measure, known as Senate Bill 419.

“Since 2013, when Los Angeles Unified adopted the School Climate Bill of Rights, we have established restorative justice programs and other non-punitive strategies to promote positive behavior and ameliorate issues that might otherwise lead to a suspension,” Beutner said in a statement. “Senate Bill 419 will support our work to keep students in school where they have the opportunities to succeed.”

Paired with that optimism, though, is recognition that there’s more work to do. Advocates expressed concerns with potential inaccuracies in discipline reporting, lingering racial biases in schools and insufficient funding for positive intervention efforts.

Whitaker said he’s heard reports of teachers or administrators pulling students from class but just not marking it down, which he deems “counterproductive.” At some schools, he added, suspensions are down but referrals to law enforcement are up.

“What you’re seeing is the slow progress,” Montes-Rodriguez said. “There are still systemic issues of racial biases within the district and our schools where black students are being profiled or disciplined in harsher ways than other students.”

A fundamental part of successful school discipline reform, advocates noted, is a “culture shift” away from zero-tolerance policies and toward restorative justice. Restorative justice focuses on training school staff to de-escalate conflicts and rebuild relationships and trust with students who act out rather than throwing them out of class.

When L.A. Unified approved the ban in 2013, it also promised to provide restorative justice training to all district schools by 2020. Sixty-five percent of schools have completed restorative justice training so far, and “all schools will be considered fully trained” by the end of 2019-20, district spokeswoman Shannon Haber wrote in an email Friday.

But from anecdotal reports, Leung said he doesn’t believe the training is “on track.”

“The district hasn’t invested enough staff or resources or training to ensure that it’s implemented with fidelity across the district,” he said. “We know a lot of people who haven’t heard of it, don’t think it’s on their campuses, and we’ve heard others who say for their campus, what restorative justice has meant so far is just the district head office providing a binder of materials and telling them to read it.”

In 2018-19, the district allocated $11.03 million in targeted school spending on restorative justice, compared with the $57.8 million it set aside for school police. That discrepancy reveals a continuing “mis-priority” in the district, Whitaker said.

Even as California’s Student Suspensions Fell 46% Over the Past 6 Years, the ‘Discipline Gap’ for Black Children Remained as Wide as Ever

Restorative justice includes “everyone, down to the groundskeeper and the custodian and the nurses,” he said. “It takes a significant investment and there’s no shortcut around it.”

Spending in 2019-20 was less clear. No police funding information was provided in the latest budget. District spokeswoman Barbara Jones wrote in an email Tuesday that the “overall budgeted expenditures for School Police was reduced in 2019-20 because some of the administrative costs were moved to the Central Office,” but couldn’t provide a spending amount.

Restorative justice funding didn’t decrease in 2019-20, but nearly $9 million was moved to the Student Equity Needs Index “to provide schools with more autonomy in how to fund implementation of the practices,” spokeswoman Haber said. The index is a ranking system that distributes designated funds to schools based on a variety of factors, such as local gun violence, asthma rates and chronic absenteeism.

“We need to constantly review and re-evaluate the needs of our schools and also allow for more local control so that schools are getting the services that best serve them,” García, the board member, said Sept. 12 in talking about the student needs index. “We don’t support a one-size-fits-all model.”

Like others, she acknowledged that the district is still learning years after the ban started.

“There is always more room for growth,” she said. “Change is good — no progress ever came about by keeping things the same.”

Correction: Los Angeles Unified School District’s 2019-20 budget did not cut funds for restorative justice, it moved them to a different part of the budget. An earlier version of the story was unclear about the funding’s status this school year.