Antonucci: Never Heard of UniServ? It Holds the National Education Association Together — and Could Tear It Apart 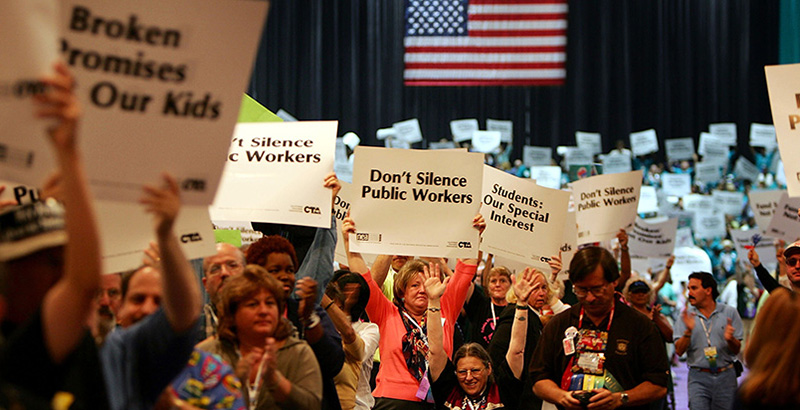 The headquarters of the National Education Association is in Washington, D.C., yet it can influence the smallest school district in rural Iowa as well as classrooms on U.S. military bases overseas. The apparatus that makes this possible may also worsen the effects of a U.S. Supreme Court ruling in favor of the plaintiff in Janus v. AFSCME, which contests the constitutionality of public-sector unions charging representation fees to non-members.

NEA has 52 state and territorial affiliates and 13,000 locals under its wing. Each member funds all three levels —national, state, and local — through dues.

Since 1970 NEA has returned a portion of the national dues it collects to state affiliates and some large locals to help fund the compensation of professional staffers known as Uniserv directors. These organizing experts are hired, paid, and overseen by state and local affiliates and partly subsidized by additional national funds. Their job is to help locals in contract negotiations, grievance filing, and political action.

Teachers in West Virginia didn’t need UniServ directors to go on strike, but they came in handy for organizing rallies, crafting messages for the media, and generally keeping the job action focused.

The funding mechanism works like this: About $32 of each active NEA member’s dues are allocated to UniServ, totaling about $70 million. NEA divides that pool into what it calls grants, one for every 1,200 members (and, importantly, agency fee payers), and sends the grant money back to affiliates based on their membership projections. Optimally an affiliate will employ one UniServ director for every 1,200 active members. This year the grant amount was $39,255. The grant is the same for all affiliates, regardless of cost of living or the status of collective bargaining laws.

In exchange, affiliates must agree to support NEA priorities and participate in “shared staffing,” which the UniServ guidelines describe this way: “UniServ staff members will be available, at NEA’s request, for up to ten (10) days each Program Year to provide on-site assistance to NEA affiliates and Active members in other states in connection with representational challenges, collective bargaining crises, training programs, and/or other special needs situations (‘shared-staffing assignments’).” A “program year” is a school or fiscal year.

So it is very likely that UniServ directors from other states were present and helping during the West Virginia strike. Being able to deploy experienced organizers from other parts of the country to a critical area is an extremely valuable asset for NEA.

Should the Janus decision go against the unions, NEA will immediately lose income from the current fee payers. It also has to plan for the additional loss of an unknown number of current dues-paying members. The union is budgeting for a $3-per-member dues increase for the 2018–19 school year but still plans to cut the UniServ grant to $36,400, a reduction of more than 7 percent.

That’s not catastrophic by itself. But while affiliates receive UniServ grants of less than $40,000, the actual salaries of UniServ directors are much higher — routinely in six figures, even in small states, coupled with generous benefit packages. It is often a chore for struggling state affiliates to come up with the rest of that compensation out of their own budgets. And since every NEA member is also a member of a state and local affiliate, every lost NEA member means a loss of funds to the state, which means less money to make up that difference.

Because fewer members also means fewer UniServ grants, states and locals may find themselves laying off UniServ directors. But that is easier said than done. UniServ directors themselves belong to staff unions, and NEA affiliates would have to negotiate any reductions-in-force with those unions. That may not go so well. If you think bargaining with a union is tough, imagine having to bargain with a union of bargaining experts. You don’t get a solidarity free pass.

As I have previously noted, the biggest effect of agency fee loss will not fall on agency fee states. Most of them have built up large reserves, and the percentage of their total revenue that comes from NEA is typically in the single digits. For the most part they are self-sufficient and will be able to weather the storm in the short term. Affiliates in right-to-work states get upward of 20 percent of their revenue from NEA, with the South Carolina Education Association getting 38 percent of its revenue from NEA. Any reduction at all is a huge chunk of its budget.

So a state like South Carolina — or even West Virginia — that has never had agency fees could maintain its current membership and still go under because overall national membership is down and its UniServ grants are cut. To keep weak affiliates propped up would require additional funds from NEA, which means drawing down its own reserves amid shrinking membership numbers.

Absent a wave of education employees voluntarily joining unions, relatively strong NEA affiliates will see more and more funding go to sustain weak affiliates. If it works, it will still make the strong affiliates weaker. If it doesn’t work, more affiliates might wonder if the UniServ system is worth the expense.