By Wendy Luttrell and Mieasia Edwards and Kelly Brady | June 28, 2021 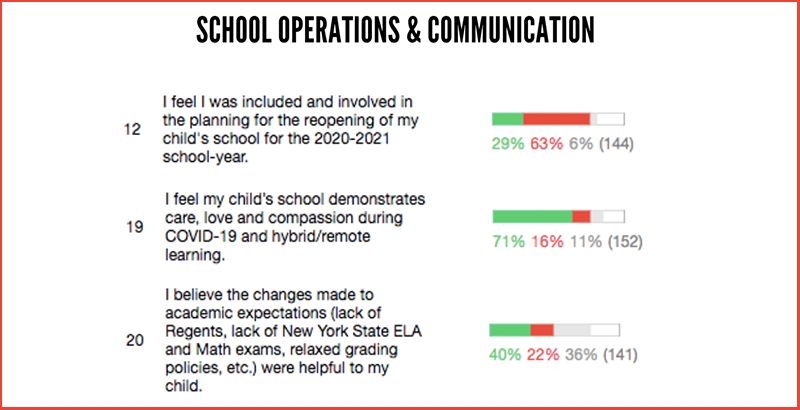 The dual pandemics of COVID-19 and racial injustice led to many uncertainties among families of school-aged children and young people across the country. As a result of quarantines, lockdowns and remote schooling, parents and family members were forced to embrace new roles as home-school educators, often with very little notice, as school openings and closings happened overnight. In New York City, the nation’s largest public school system and one of the first to reopen its doors to students last fall, there were rapid policy changes that put untenable demands on working parents — such as an ambitious full-school reopening in September that was followed by a switch back to fully remote by November.

Our team of researchers wanted to hear New York City parents’ perspectives on an education system turned upside down. We designed an interactive survey using the platform Pol.is that asked participants to “agree,” “disagree,” “pass” or “not vote” on “seed” statements about how their children were faring, what schools were doing, whether there were adequate supports and what schools should be teaching about racial justice. A unique feature of the survey is that it allowed participants to add their own statements and respond to the statements of others; 217 people responded to the original 17 statements and added more, for a total of 92 statements that were included in our final analysis. Twenty participants agreed to be interviewed, which added depth and personal experiences to the survey results.

The survey was offered in English, Spanish and Chinese and was distributed through parent advocacy groups, which helped us reach parents who might not otherwise have been represented. The survey was not stratified according to race, ethnicity, income or borough. It was distributed from December to February, and the in-depth interviews took place until April.

Seventy-five percent of parents surveyed reported that they were not included in the planning for the opening of their child’s school for the 2020-21 school year. This was a particular concern for single-parent families (87 percent). Parents know their children best, and yet many were forced to the sidelines, as one mom put it, watching her child “figure out how to navigate the system all by herself.” Alongside desires to be more involved in decision-making, parents expressed appreciation for teachers. Seventy-one percent of parents agreed that “My child’s school demonstrates care, love and compassion during COVID-19 and hybrid/remote learning.”

Social-emotional and mental health needs topped the list of concerns, with 91 percent of parents surveyed calling for support to address their children’s social isolation during the pandemic. Over 4,200 NYC children lost a parent to COVID-19, more than 325,000 have been thrust into poverty and, with a moratorium on evictions set to expire Aug. 31, many NYC families will face eviction, displacement and potential homelessness. Until reports on graduation rates, end-of-year grades and standardized testing scores are submitted, we will have no concrete data about learning loss during the 2020-21 school year. But 57 percent of parents surveyed expressed concern about their children’s “significant learning loss while engaging in hybrid/remote instruction.” In addition to ameliorating academic loss, our research suggests the need to prioritize resources to help students and families grapple with trauma endured since March 2020, and school administrators must have the necessary funding and support to do so.

In response to the murder of George Floyd last year, many schools nationwide quickly adopted anti-racist curriculum to address systemic inequities. In NYC, as elsewhere, debate over anti-racist curriculum and critical race theory has emerged, centered around what is taught in schools. Our surveyed families overwhelmingly agreed that schools should teach about the “damages of white supremacy” (77 percent), and that teaching about the Black Lives Matter movement would “promote dignity / respect / sensitivity to challenges all kids face” (79 percent).

New York City is in the midst of an important mayoral campaign, and the candidates must listen to what parents are saying. As they jockey for position in the public favor, they can learn from families’ ideas and opinions as their children transition out of remote schooling and back into school buildings. On many politicians’ platforms, there is a focus on equitable schools, anti-racist curriculum and increased teacher diversity; our surveyed families support these measures. Parents also want their children to learn about the social issues of our times as well as historic inequities of the past. They believe schools can and should be a place where children learn strategies to counteract racism and interrupt injustice. For schools to achieve this goal, multiple stakeholders, including local government, school leaders, teachers, parents and students, should collaborate to develop the resources necessary to make schools a place of progress and justice.

By placing families’ needs at the center of school planning, we hope our next mayor, and the schools chancellor he or she will select, can seize this moment to create a brighter tomorrow for all New Yorkers, especially the children.

Wendy Luttrell is professor of urban education, critical psychology and sociology at the City University of New York and executive officer of the urban education Ph.D. program at the CUNY Graduate Center.

Mieasia Edwards is a Ph.D. candidate in urban education and sociology at The Graduate Center, City University of New York.

Kelly Brady is a Ph.D. candidate in urban education and sociology at The Graduate Center, City University of New York.