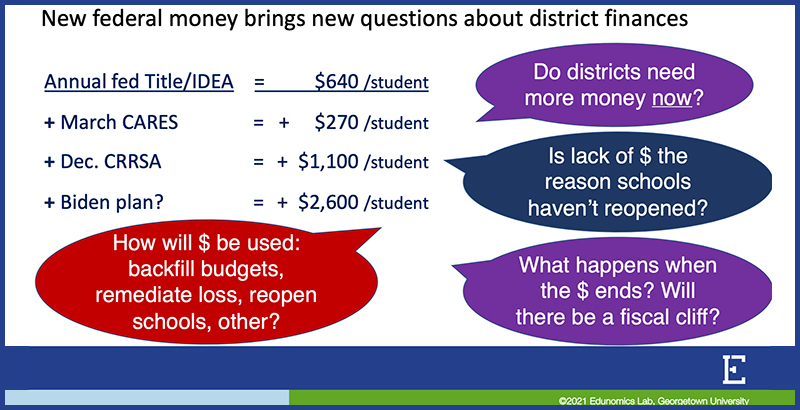 How are school district budgets faring this year? That depends.

Many districts are struggling financially. They have spent large sums of money dealing with the COVID-19 pandemic — buying technology, purchasing cleaning supplies, hiring more substitute teachers and attempting to address student learning loss and disengagement. This story, of districts in distress, is an easy one to tell, and there are certainly many districts in this situation.

But that narrative does not describe all districts. Those that have remained mostly or entirely virtual have actually been able to save money, and some are even on pace to run surpluses this year.

All this confounds the situation at the national level, where advocates are pushing for federal lawmakers to pass a third round of stimulus funding even as much of the earlier money remains unspent. The latest bill is being justified on the grounds that more money is the missing ingredient to reopen schools. But about half of the nation’s districts are open already, plus most of the nation’s private schools, and it’s not clear that money is the key barrier in the districts that remain closed.

So, to get a clearer picture of school district spending patterns during the last several months, our team at the Edunomics Lab dug into a sample of large-district financial documents. In a webinar this week, we compared the approved district budgets from last summer to mid-year financial documents this winter to give us a portrait of whether districts are spending more or less than projected. We specifically included districts that were conducting in-person classes and others that have remained fully remote for the past year. The contrast is stark.

On one end, districts that have been operating in person tend to be running deficits. For example, Gwinnett and Fulton counties in Georgia are overspending their budgets by $282 and $206 per pupil, respectively. The Des Moines school district was over budget by $248 per student. The Minneapolis district started reopening in February and is already over budget by $1,055 per pupil, mainly due to an increase in student support services. The Austin, Texas, district was over its budget by a whopping $1,791 per student.

Meanwhile, districts that are operating remotely are spending less than anticipated — on substitute teachers, utilities, supplies and transportation— and might be less likely to replace staff who have left.

This may not fit the national narrative, but many districts fall into this camp. Rochester, Minnesota, for example, started opening elementary schools this month after running $9.7 million under budget through the middle of the year, the equivalent of saving $540 per pupil. Portland, Oregon, had $13 million less in revenue than forecast, but expenditures fell by $34 million, for a net saving of $419 per student. Seattle had spent $394 less per student, and Montgomery County, Maryland, saved $180 per student. 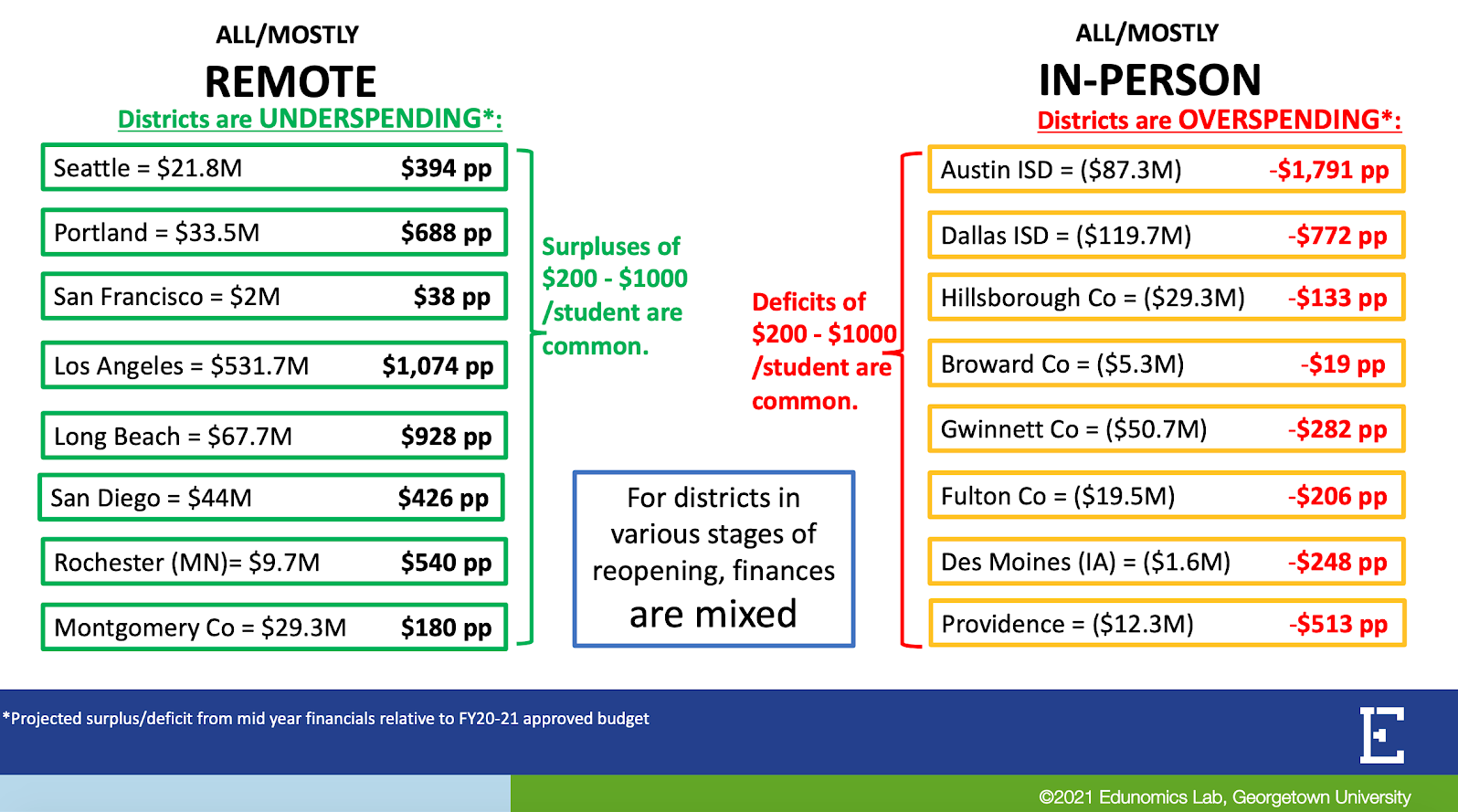 Nearly all the large California school districts spent less than they anticipated. San Francisco, San Diego and Long Beach were all under budget through the middle of the year. Los Angeles Unified had the largest savings we found; it underspent its budget by $532 million, a saving of $1,074 per student. About half of that came in the form of reduced payroll.

Ironically, districts facing budget deficits right now may be ahead of the ones with surpluses. Districts that have been open since the fall can already start implementing policies to address any learning gaps that emerged from last spring’s shutdowns. Meanwhile, districts that remained closed throughout the fall and winter are still in the middle of contentious reopening fights. As those fights continue, every day of lost instruction means another day lost for students, and, in those districts that remain closed, students may continue falling further behind.

Some districts may be unable to open without external pressure. Chicago Mayor Lori Lightfoot, for example, believes schools there would not have been able to open without mayoral control, and city leaders in Los Angeles and San Francisco are resorting to lawsuits to pressure school districts to open the schools. Money could also play a role. State lawmakers, even in Democratic-led states, are pushing schools to reopen and tying funding to those decisions.

It’s unclear what will happen next. State budgets are far more robust than projections from last summer led us to believe. While we can’t say whether school districts have all the money they will eventually need to help students recover lost learning time, we can say their budgets are in better shape than we might have expected six months or a year ago.