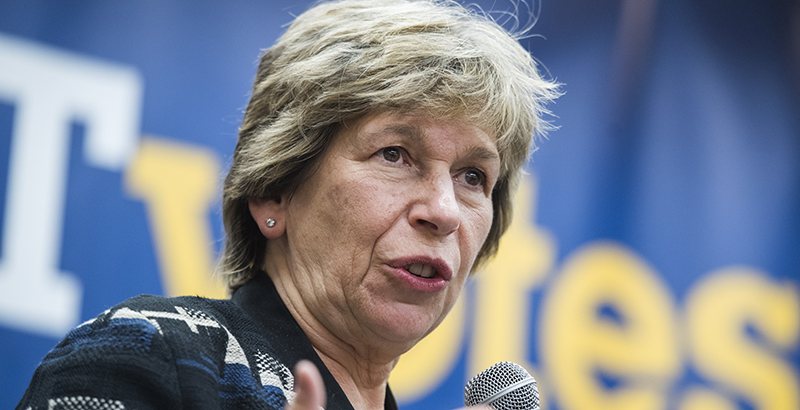 Randi Weingarten, president of the American Federation of Teachers, raised some eyebrows March 19 during an interview on the Black News Channel. While discussing her union’s response to new Centers for Disease Control and Prevention distancing guidelines for students, she said, “We’ve been trying to reopen schools since last April.”

Her choice of month was timed to the release last year of AFT’s “A Plan to Safely Reopen America’s Schools and Communities” on April 29, 2020. With the union having jumped on the school reopening movement so early, according to Weingarten, surely there are many cases of AFT local affiliates at the forefront of the effort.

The teachers in almost all of America’s largest urban school districts are represented by AFT affiliates. After 11 months of school closures, we have a treasure trove of evidence of how they reacted to many and varied reopening plans. Even among the districts where schools eventually reopened, AFT unions offered more resistance than cooperation.

Let’s start with the largest: New York City and the United Federation of Teachers. When Gov. Andrew Cuomo shuttered schools in May 2020 for the remainder of the school year, UFT released a statement supporting his decision.

By August, UFT sought to further delay reopening, asking, “Will any parents be willing to put their children in a school whose principal believes the building is not ready to open because it is not safe?”

At the end of that month, the UFT executive board prepared a strike authorization vote if a satisfactory reopening deal wasn’t reached with Mayor Bill de Blasio. Both parties soon settled, and the agreement led to a partial reopening.

On the opposite coast, United Teachers Los Angeles has been staunchly opposed to reopening all along. Even this month, as the state released its plan with the blessing of the state teachers unions, UTLA called it “a recipe for propagating structural racism.”

That tone was echoed by the Chicago Teachers Union, which in December deleted a tweet that stated, “The push to reopen schools is rooted in sexism, racism and misogyny.”

Heading south to Miami, we find the United Teachers of Dade suing the state in July to stop the “reckless and unsafe reopening of schools” in the fall.

“Lives are going to be lost,” said President Karla Hernández-Mats in September. She was joined by Anna Fusco, president of the Broward Teachers Union, who asked, “What will you do when the deaths start happening?” Subsequent evidence showed their fears to be baseless.

The Houston Federation of Teachers called state and district reopening guidelines “stunningly inadequate” in July and charged the district was “in no way, shape or form prepared” to reopen in the fall. In November, the union petitioned the school board to return to all-virtual learning after Thanksgiving.

Consistent opposition has been the hallmark of Virginia’s Fairfax County Federation of Teachers, which opposed reopening plans in September, October, December and January.

“We all want nothing more than for students and staff to return to school for face-to-face instruction, but right now, it just is not safe,” said union President Tina Williams.

“We sit endless hours, helping your children, and the community, every day, all day. We give up everything. And now you’re asking us to risk our lives? That’s too much.” she said.

The Philadelphia Federation of Teachers has opposed three plans, culminating in a message to members in February not to report to school on reopening day.

“Quite frankly I am disgusted that the district would continue forward with a path towards reopening buildings that again puts my dedicated members in harm’s way, and in just a few short weeks, will put Philadelphia’s children in harm’s way,” said union President Jerry Jordan.

So it appears Weingarten’s claim is the exact opposite of reality. But she has to make it, because the alternative is to admit that teachers are receiving the same pay, reduced hours, less oversight and, in many cases, protection from layoffs despite reduced enrollment — all with zero risk of contracting COVID at work. They have little incentive to return to classrooms.

As a long-time observer of teachers unions, I’m stunned at how many people are only now discovering that this is the public education world we’ve created. I’m a realist, and you should be, too. We won’t have five-day-a-week, in-person instruction for all K-12 students until the teachers unions say so.