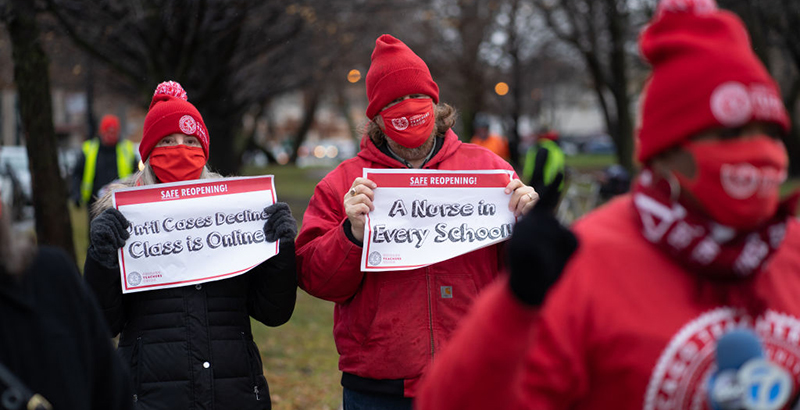 COVID-19 continues to be a unique phenomenon in American life, but who knew it would radically raise awareness of how K-12 public school labor relations can affect our daily lives?

School boards, legislators, governors and even the White House are beside themselves trying to find ways to reopen schools for in-person instruction. Teachers unions are, at best, unenthusiastic and, at worst, are trying to wring tangible benefits out of the reopening desperation.

Many policymakers seem to have been taken completely off guard by this high degree of union reluctance to return to work, even though the signs were obvious as early as last May.

There are more than 13,000 school districts in the United States, each of which is now tasked with finding a way to deliver the best education possible under prevailing local circumstances. This is an extremely difficult task.

The unions’ task is much easier. Their primary mission is the protection and well-being of their members. Regardless of the relative safety of the school setting, no exposure to others is safer than any exposure to others. From the union perspective, staying home is the most defensible position.

For the most part, school districts have incentivized the union stance. In a study published in Education Finance and Policy, researchers found that an overwhelming majority of districts engaged in formal agreements with unions over distance learning had reduced teacher workload and abbreviated performance evaluations, but maintained pay at pre-COVID levels. California even banned teacher layoffs.

Unions see reduced hours, reduced oversight, protected staffing and stable compensation. Why would they be in a hurry to send their members back into a much-altered classroom environment?

To be sure, many teachers have expressed dissatisfaction with distance learning and long to get back to normal, but the union message to them is, “We’re saving your lives and the lives of your students.” Why would a teacher take any risk if she doesn’t have to?

Although there are only two national teachers unions — and they are not competitors by any stretch of the imagination — it is virtually impossible for them to engineer a national teacher strike. Labor laws vary so widely from state to state that a permissible strike in one would be flatly illegal in another. They don’t have the capacity to organize one, and not every state and local affiliate would go along if they did. And all that doesn’t even account for the millions of private, charter and nonunion public school educators.

However, if such a national teacher strike were possible, our current situation is what it would look like. Adherence would greatly depend on the local political situation, so you would expect militancy in places like Los Angeles and Chicago, hard bargaining but some accommodations in New York City, grousing but compliance in Florida and a quicker return to normal operations in Southern and rural states.

So what will it take to end this virtual strike and get teachers back to the classroom? Policymakers — even union-friendly Democrats — who thought they had the answer have gotten a quick smackdown.

For President Joe Biden, it may have been delivered with a velvet glove, but his pledge to reopen most schools within the first 100 days of his administration was soon followed up by Dr. Anthony Fauci assuring the National Education Association, “That may not happen because there may be mitigating circumstances.”

California Gov. Gavin Newsom generated a reopening plan, only to have the California Teachers Association and its legislative allies immediately dismiss it. Newsom was so frustrated, he was unusually frank in a talk with the Association of California School Administrators.

“If everybody has to be vaccinated, we might as well just tell people the truth: There will be no in-person instruction in the state of California. Just tell them the truth. Don’t mislead people,” Newsom said.

Most states have prioritized teachers on their vaccination lists, but unions have made no guarantees that inoculated teachers will return to work, which renders their priority ranking highly questionable. Millions of elderly and sick people will have to wait while younger, healthier teachers are vaccinated, and then remain at home.

To make the situation even more dubious, unions are preparing to defend members who refuse to be inoculated.

There are a handful of tools to remedy labor disputes, e.g. carrots, sticks and carrots used as sticks. Unfortunately, these are necessary but insufficient to end the current standoff.

Is there any amount of scientific data that would persuade a teacher to return to work if she fears for her life or health? Is there any limit to the number of safeguards she would want? Unions may be asking for huge infusions of cash, but how much will it take before they strongly encourage their members to return to work, never mind insist on it?

Unions are stalling, because they can. The last thing they want to do is to make what might turn out to be an unwise or unsafe decision, so they will make no decision and hope they are bailed out by vastly improved infection rates.

While this seems like an intractable problem, there are really only three choices:

1) Accept the union’s status quo. Make the best you can of online instruction and wait for conditions to change.

2) Open the schools. This would place you in the traditional strike scenario, where the union withholds labor and management withholds pay.

3) Negotiate the best deal possible and get the union to commit. Some districts and unions have agreed on and implemented a reopening plan. Even if imperfect, it puts both parties on the same side.

None of these is ideal. The damage in learning loss is already done and bound to get worse. But if you want schools reopened, you go with the best bad idea you have.