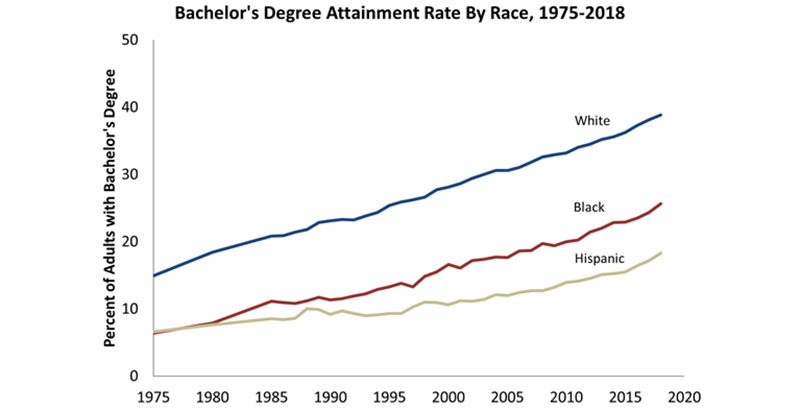 It might be easy to get depressed about the current state of American education. We’ve just gone through a “lost decade” with flat math and reading scores and outright declines for low-performing students. Worse, stagnant achievement was not limited to K-12 students — the scores of college students and even of American adults tested on exams that compared them with peers worldwide were also flat.

But even as educational achievement has stagnated, educational attainment is up significantly. In fact, although the full data are not in yet, the 2010s are on track to be the best ever in terms of increasing college attainment rates.

It might be easy to dismiss these two trends as incompatible, as a sign that high schools and colleges are simply lowering their standards for completion. While there’s certainly reason to suspect some of that is happening at both the high school and college levels, we shouldn’t entirely discount the rising attainment rates.

One reason is that it’s much easier to gauge attainment than achievement. Measuring attainment is as simple as asking adults what their highest level of education is, whereas measuring achievement involves a complex process of defining what people at various ages should know and be able to do, developing a tool to measure those skills, sampling the given population and then translating the sample results into larger estimates.

This is why we have better longitudinal data on attainment than we do on achievement. Thanks largely to America’s decennial Census process, the National Center on Educational Statistics has high school attainment rates dating to 1870 and bachelor’s degree attainment back to 1910. In contrast, we didn’t start measuring achievement data until the National Assessment of Educational Progress (NAEP) enabled tracking of long-term trends in reading and math in the 1970s. We didn’t have comparable state-level achievement scores until the 1990s, and it wasn’t until the 2002 passage of No Child Left Behind that NAEP became mandatory for states.

Stepping back to look at the long-term trajectory of attainment, it becomes clear that the gains have accelerated. College attainment rates rose just 1 or 2 percentage points per decade for the first half of the 20th century and only began to pick up in the 1970s. Although the most recent data only go through 2018, the 2010s have already seen a gain of 5.1 percentage points, more than the gains in the 1980s, 1990s and 2000s. If the 2010s ended anything like the decade began, it will easily be the best decade we’ve ever seen in terms of college attainment. 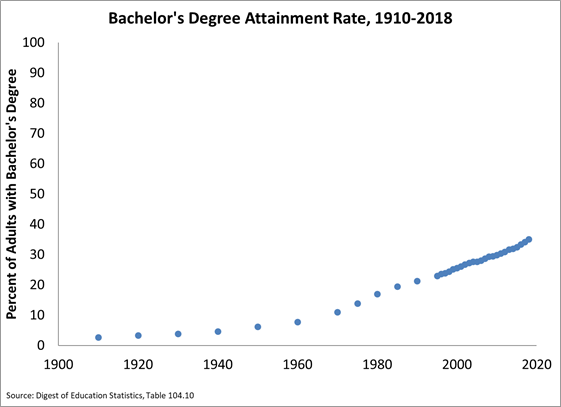 The same data by race don’t go back quite as far, but they show similar trends. White Americans have the highest attainment rates and have seen the largest gains over time. While whites have continued to maintain and even grow their advantage in college attainment rates over blacks and Hispanics, all groups were on pace to have their best decade ever. 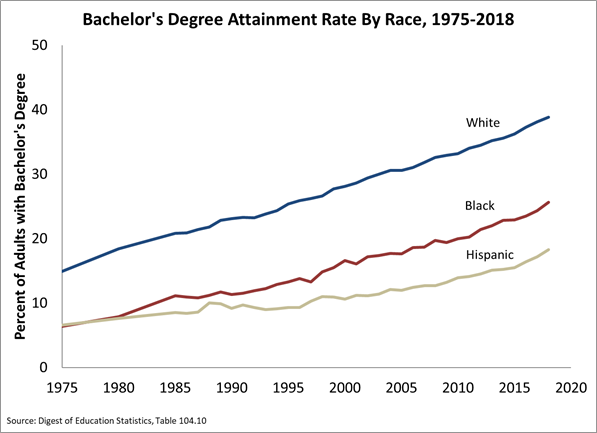 As I’ve written before, there are a lot of factors driving these trends. Since these figures include all American adults at any given point in time, they are affected by mortality and immigration patterns. Education policies have also played a role. In the last half of the 20th century, compulsory attendance laws, the GED and the GI Bill, to name just a few contributors, all played roles in accelerating attainment rates. These examples also help illustrate that not only is attainment easier to measure than achievement, it is also easier to improve.

The research field is divided on whether attainment or achievement matters more. When researchers Eric Hanushek and Ludger Woessmann looked across countries, they found that cognitive abilities — achievement — are more predictive of future economic growth than attainment figures. However, researchers in the U.S. have found that, even after controlling for test scores, people who drop out of high school and earn a GED have worse economic and non-economic outcomes than their peers who persist through to complete a traditional diploma. Nobel Prize-winning economist James Heckman has argued that there’s something important about the soft skills needed to stay in school and earn a degree that can’t be captured by achievement alone. Similarly, higher educational attainment raises pay across nearly all occupations: Plumbers, hairdressers, bartenders, real estate agents, sales agents, wait staff, firefighters and cashiers with higher education all earn more than their less-educated colleagues in the same fields.