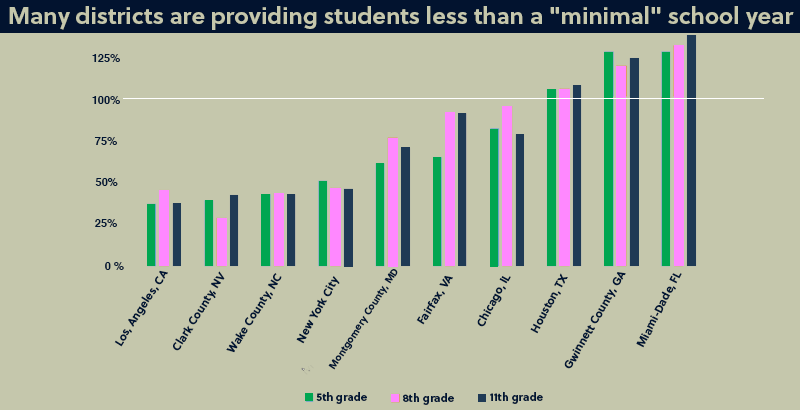 The term “chronic absenteeism” is defined as missing 10 percent or more of school days in a year. By that standard, the majority of K-12 students might be considered chronically absent this school year.

There are two explanations for this. One is the students themselves. For justifiable reasons, kids without computers or Internet access at home are not able to participate fully in instruction delivered via technology.

But there’s another level to this that is out of the students’ control. In too many places, official district policies will lead to children missing so much instructional time that they would be considered chronically absent in any other year.

As I wrote back in August, every state sets a minimum number of days or hours that make up an instructional year. By law, schools are required to teach students for at least that amount of time. States typically allow some leeway if districts lose time due to severe weather or other emergencies, but after some threshold, districts are required to make up for lost time.

In that August piece, I ran the numbers on what my local public school district of Fairfax, Virginia, was offering to my children. Through its remote learning schedule, I calculated that Fairfax was offering less than half of a typical school year to my first-grade son.

These problems are not unique to Fairfax. Less than half of the nation’s school districts started the year with full, in-person instruction, and larger districts were more likely to start the school year fully remote or with hybrid schedules combining some aspects of each. In other words, the majority of American students are experiencing either a partial school day or week, or fully virtual classes.

To make those models work, and to avoid Zoom fatigue for both teachers and students, districts reduced the number of instructional hours. They also cut the number of days of instruction they were offering each week in order to give teachers more time to plan. Similarly, some districts, like Fairfax and New York City, started the school year late as they finalized their plans.

I’m not questioning the logic of any of these decisions. After all, we’re in the midst of a pandemic that no school leader alive today has ever experienced. But collectively, how much learning time will these decisions cost students?

Video Explainer: Chad Aldeman talks about how he tracked learning and instruction time across 10 major districts

To find out, I looked for sample schedules in 10 of the country’s largest school districts for students in fifth, eighth and 11th grades, to get a range of ages. These were not all easy to find. Some districts provided clear communications about what they might be able to expect for their children, while others buried the information in teacher labor agreements. In a few cases, mostly in the South, the districts did not provide a revised schedule because there was no change from prior years. From those schedules I could find, I compared the number of hours of live instruction the district planned for each group of students with the state’s requirement for the amount of school time children should receive in a normal year.

The graph below shows the results. The red line across the middle represents a district meeting 100 percent of what the state requires in a normal year. 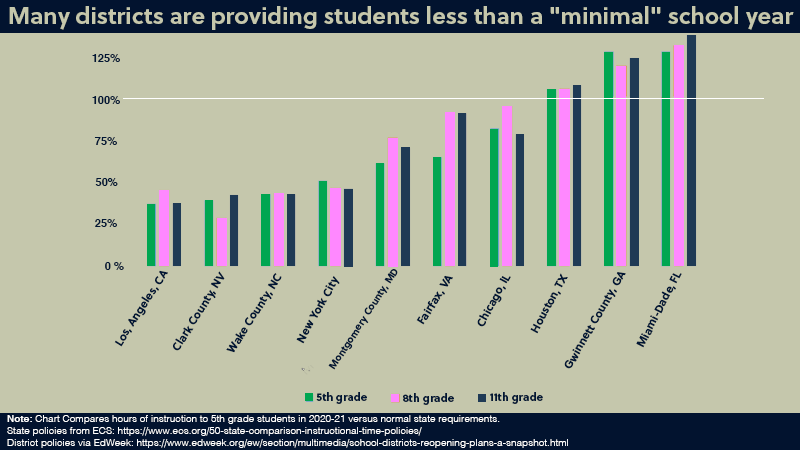 On the other end, Houston; Gwinnett County, Georgia; and Miami-Dade, Florida, are all on track to surpass the minimal state requirements for instructional hours. Other researchers have written about the political factors contributing to school reopening decisions, with big-city districts in Democratic-controlled states more likely to be fully remote than more rural areas in Republican-controlled states. But this exercise suggests we should extend that dynamic even further: The number of instructional hours students are receiving depends on what region or city in which they live. Students in rural areas and in the South are likely to receive many more hours of instruction this year than their peers living in other regions of the country.

The projected learning loss for students is staggering. Los Angeles, Clark County, Wake County and New York City all plan to deliver less than half of a normal school year’s worth of instruction for students of all ages. That translates into 433 lost hours for a fifth-grader in New York City and 558 hours in Los Angeles. Depending on the length of a school day, these losses are the equivalent of 60 to 100 days of lost learning time.

Now, these figures are hypothetical. Some districts are allowing parents to choose the type of schooling they want for their children, or varying their offerings for different student groups, while these estimates rely on the default schedule that districts are providing most students at the beginning of the year, and they assume that students will remain on those schedules. Although I am using the term “instructional” time, I did count non-academic time such as class transition periods and lunch breaks, but I did not count other forms of instruction, such as homework assignments or pre-recorded lesson plans, that may be going on outside of formal meeting times.

Still, these figures assume perfect attendance, and that an hour of virtual instruction is perfectly comparable to an hour of in-person instruction.

This exercise is meant to be illustrative and is not intended to suggest that these districts should immediately reopen regardless of the viral spread in their community. Nor is it meant to cast blame on any of the decisionmakers involved.

But it does illustrate the potential costs of our inability thus far to manage the spread of COVID-19. It should also serve as a reminder that we’ll eventually need to invest in those students who are getting less education than they deserve right now.