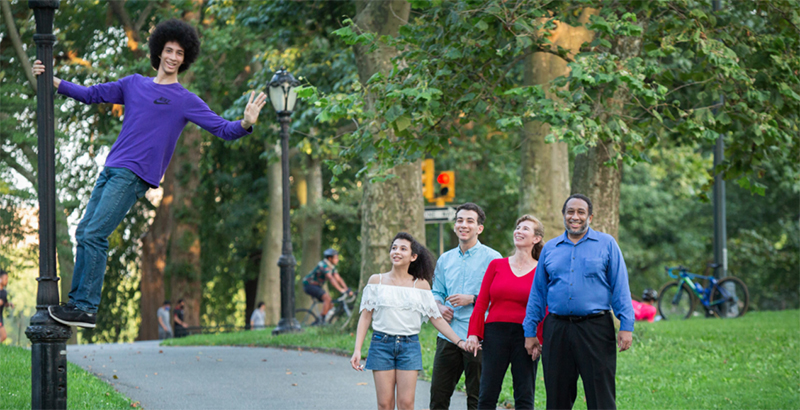 We see a child in a maple tree
We’re watching him climb,
You and I.
You say, “Come down,
You’ll hurt yourself!”
I say, “Go up
You’re touching the sky!”
– “Seeing Things” by John Kander and Fred Ebb

My middle child has been begging to drop out of school since he was in third grade. Because my husband and I believed that a 9-year-old wasn’t the best judge of what he did and did not need academically — and because, in all honesty, we thought that learning to do things you didn’t necessarily want to do in the short run so you might reap benefits in the long run was a critical life skill — we negotiated the following deal: He would stay at his extremely rigorous current school until eighth grade, and then he could skip high school and go straight to college.

Our son kept his part of the bargain. He grudgingly swallowed his displeasure and got grades and test scores high enough to apply to college at age 14. Unfortunately, the institution that accepted him without a high school diploma wanted more tuition money than we were paying for his older brother to attend an Ivy League university. Not only was the price tag objectively not worth it, but we couldn’t afford it, anyway.

So we investigated going the City University of New York route. Affordable, close by, the perfect solution for the underage student! Except that, as I wrote in August 2018:

All right, then, we’d sign him up to take the high-school equivalency Test Assessing Secondary Completion Exam. Nope! You have to be at least 17. And that doesn’t mean you can take it the day after you turn 17. It means you have to take it at the end of the academic year during which you turned 17, which, for my son, would have meant a few months short of his 18th birthday.

“I am truly sorry,” I told my son, “It looks like you’re going to have to go to high school after all. Just try it for one year,” I pleaded, “you might like it!”

We chose Stuyvesant High School, supposedly the most academic of the schools he’d gotten into.

We weren’t going in blind. My husband is a Stuy alum, I went to a similar, screened high school in San Francisco, and our older son graduated from Stuy in 2017.

We were familiar with teachers like the one who told my oldest, “Don’t think, just tell me what’s in the book.” And the one who claimed she could guess your native food just by looking at you. And the one who heckled kids in the accent that matched their apparent ethnicity. We knew about teachers who took months to grade a single piece of work, and an administration that didn’t care how many Regents exams you’d passed; if they said you were taking the class again, you were taking the class again — because it made their scheduling easier.

My older son worried about how his brother would fare at Stuyvesant. “These teachers don’t know what to do with a kid who asks questions instead of just knowing all the answers.”

And he did. There were also teachers he adored. And subjects he found interesting. That wasn’t the problem.

The problem was he wanted to learn more, ask more questions and go at his own speed rather than at the rate of a 34-student class.

At the end of freshman year, he reminded me that I’d promised he could quit if he gave it a fair shot and still didn’t like it. I had. I had even put it in writing. He did what we’d asked of him. He went every day. He got all A’s. He still wanted to leave.

And I … broke my promise. I went back on my word and told him he had to go back. Because I was too scared.

My son returned to Stuy for his sophomore year. When COVID-19 hit and schools went remote in March, he actually seemed to prefer it. I thought our problems were solved! He could spend less time on schoolwork he found boring (not to mention transportation to and fro and the dead time in between), and more on the activities he enjoyed, such as dance class and his part-time computer programming job.

Come the summer, we opted for all remote learning again for September. But he still wanted to leave Stuy.

He assured us he still intended to go to college. In fact, he stressed that the reason he wanted to take these harder courses now was he wanted to be prepared to take advantage of the higher-level classes available once he got there.

Considering what a mess online learning had been in the spring — some teachers were terrific, continuing to lecture, assign and grade work, while others merely put up videos and worksheets and called it a day — I was convinced.

My husband was not.

My husband and I saw things, as Fred Ebb wrote in the lyric atop this post, differently.

I looked at my son’s proposal through the eyes of an immigrant. My father, who came to America in his 30s, always said, “Nobody had ever heard of the university I went to. The only thing that mattered when it came to getting a job was what I knew and what I could do.”

I also saw it through the eyes of a writer. I went to a state school. Since graduating almost 30 years ago, I’ve worked on numerous television shows (alongside colleagues who’d gone to much more prestigious universities) and published over a dozen books. At no point has anyone ever asked me where I went to high school, or where I went to college. The only thing that mattered was what I knew and what I could do.

My husband saw our son’s proposal through the eyes of an African-American. He told him, “A Black man has to have twice as many degrees as a white one to even be considered for the same job. They’re going to look at your resume, see a GED instead of a Stuyvesant diploma, and it’s going to go right in the trash. A Stuyvesant diploma will get you into any college you want. Homeschooling might make it so that you don’t get in anywhere. And then what will you have? You’ll have nothing! You’re acting like a white kid. You are not a white kid!”

Our son reluctantly started his junior year at Stuyvesant. By October, he was showing us how little learning he was receiving. I tried to negotiate a compromise. Once the city announced that attendance would no longer matter in grading, I suggested he not bother logging on, just do the easier Stuyvesant work — when he stopped going to class, only two teachers checked in to find out if anything was wrong and ask how they could help — get the credits and study whatever he wanted on the side. He told me, in that case, he’d have to quit his job due to time constraints.

Finally, at the end of October, he’d made his argument so convincingly that we gave in. We allowed him to file his Letter of Intent to Homeschool with the city.

He’s on his own now.

We’re on our own now.

In the end, it’s his life. And, as he said, “If I’m going to make a terrible mistake, isn’t now better than later?”

“No,” my husband said, flatly.

My husband and I see things differently. We both want what’s best for our son. There’s a Russian expression: It’s not evening yet.

We won’t know if we did the right thing until whenever that might be.

At least I still have my mother’s wisdom to cling to: Don’t worry, whatever you do for your child, you’ll be wrong.