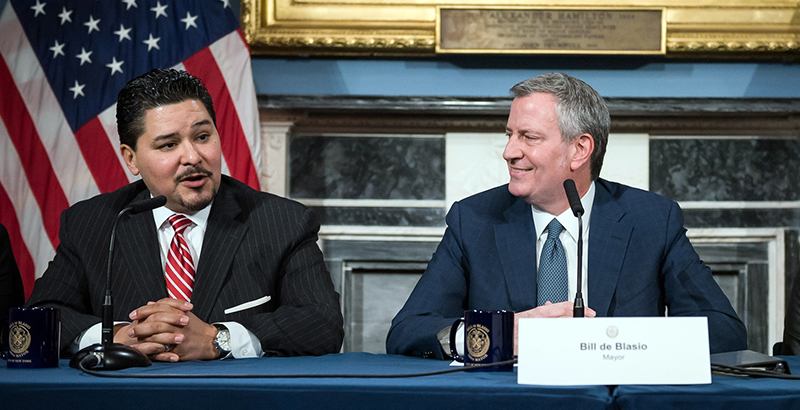 As of Monday, Aug. 24, clicking on the link https://www.schools.nyc.gov/calendar produced the message: No items were found.

Nonetheless, the majority of stakeholders, from Mayor Bill de Blasio to School Chancellor Richard Carranza to United Federation of Teachers President Michael Mulgrew to, oh, yeah, parents and students (remember them?), are operating on the assumption that the first day of the 2020-21 NYC public school year will be Thursday, Sept. 10. (Charter, Catholic and independent schools have set a variety of different dates, most of them earlier.)

At a press conference Aug. 19, Mulgrew said, “We don’t believe it is possible for schools to open on Sept. 10. … It might be one of the biggest debacles in the history of the city.”

UFT demands prior to schools reopening include (full checklist here):

Those needing to get tested would include 1.1 million students, 75,000 teachers and thousands of principals, cafeteria workers and custodians.

If these demands are not met, Mulgrew said, “We are prepared to … take a job action.”

That sounds nice, doesn’t it? If it deems that schools have not taken adequate precautions to ensure the safety of its members, the UFT will take action, with members teaching remotely instead of entering school buildings.

That’s not what a job action is. A job action is a nice — and deliberately obscure — way to say strike. NYC teachers are threatening to strike in the same way Arizona teachers recently staged a sick-out.

“If we feel that a school is not safe, we are prepared to go to court and take action. If a court determines we are breaking the Taylor Law, so be it.”
-UFT President Mulgrew

Where things really get interesting is that in advocating for pushing back school reopenings, the UFT is open to proceeding with 100 percent remote instruction. Though teachers also say they received no training over the summer in how to make remote learning more effective than it proved in the spring — any parent saying so was accused of teacher bashing, however.

No one was trained in remote learning. The number is zero. I taught summer school. Our “training” was watching a sales pitch video from and Ed tech company and then a useless zoom about ilearn that failed to mention that the system is glitchy and poorly designed.

Also on Aug. 19, Chalkbeat reporter Reema Amin heroically live-tweeted a marathon 10-hour-long Panel for Education Policy meeting chaired by Carranza, where the majority of public comments from students and parents supported a delay in opening, and 100 percent remote instruction in the meantime. (You can read the entire thread here.)

From the beginning, de Blasio has insisted that opening schools for hybrid instruction is what the majority of his constituents want. Almost two-thirds, 74 percent, opted for in-person learning, while only 26 percent signed up for all-remote, he claimed.

Critics instantly questioned those numbers, pointing out that the mayor was extrapolating from a survey to which less than 30 percent of NYC families responded.

Parents had until Aug. 7 to decide whether to register their child for hybrid or remote learning in the fall. But it wasn’t exactly a straightforward decision.

Families were told that if they chose hybrid, they could opt into remote at any time. However, if they chose remote, there would only be four designated time periods — the first one coming in November — when their child could return to school.

Despite what elected officials might think, NYC parents aren’t stupid. Dozens of them told me that they were selecting the hybrid option because it was the more pragmatic choice, and they could still change their mind up until the first day of school — and beyond.

Furthermore, all parents who didn’t respond to the survey were automatically assumed to be opting for hybrid, which, naturally, boosted those numbers. There are 1.1 million students in the NYC school system. Only 322,572 had filled out the survey as of Aug. 7.

A week later, 40,000 more students requested to be added to the remote learning rolls.

And, despite attempts to paint those choosing remote learning as rich, white, “privileged” parents who don’t need to return to work and can afford child care and/or to stay home and supervise their child’s education:

On Aug. 20, de Blasio introduced a “Back to School Pledge.”

He began with the words, “We work for the parents and the kids of New York City.”

Mayor responds that families “need their kids to be in school in person.” “I work for the parents. I work for the kids of this city… I’m not going to damn them” to “less education than they deserve.”