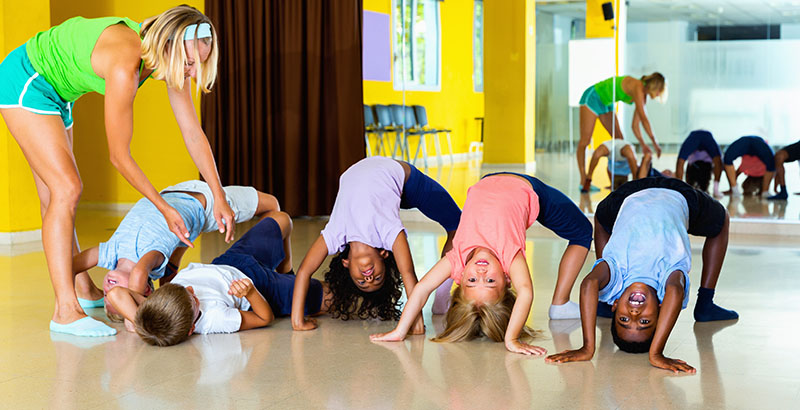 My 10th-grader got a 100 in physical education on his most recent report card.

“Wow,” my husband exclaimed, “those eight years at Ballet Hispanico are really paying off!”

My son has been taking dance — ballet, modern and flamenco — since he was 8 years old. As a result, public school PE hasn’t been particularly challenging for him.

He is, however, shocked by how challenging it is for some of his classmates.

“There are kids who don’t even know how to do a forward roll,” he informed us, baffled.

My son is not a “gifted” athlete. In fact, dance comes harder for him than schoolwork, and his Ballet Hispanico progress reports testify to that fact. He is, at best, average there.

So what is my son supposed to do with his prior-knowledge forward-rolling skills in the course of his regular PE classes?

A) He can continue doing his forward rolls over and over and over again, literally spinning his wheels. Then, when it comes time for the Presidential Fitness Test, he can score 100 percent, and his school can take credit for the great job it did preparing him for it.

B) He can spend the bulk of his class time helping those students who don’t know how to do a forward roll learn how to do a forward roll. (“I tell them, you have to tuck your head,” he reported recently.) Then, when he scores 100 on the Presidential Fitness Test, and his classmates do better than they have in previous years, his school can crow about how putting kids with different skill levels in the same class not only raised scores for the low achievers, but the high achievers’ scores didn’t go down. (See New York City Schools Chancellor Richard Carranza’s boast about what happened when he got rid of algebra in eighth grade in San Francisco … and why he is implementing Algebra for All in eighth grade in NYC. According to him, he was right both times!)

C) His school can confirm that he has mastered high-school-level forward rolling and grant him his diploma so he can continue studying forward rolls at the collegiate level, regardless of his age.

D) In order not to lose the funding that comes with forcing a student to remain in school until age 17, his school can let him test out of Forward Rolling for Beginners and allow him to go straight to Advanced Placement Forward Rolling, so he doesn’t lose his mind with boredom and constantly beg to be allowed to quit school.

Am I being ridiculous? Yes.

Am I stretching a metaphor too far? Maybe.

Am I wrong? You tell me.

NYC has decreed that all children learn all skills at exactly the same pace. No exceptions.

The city’s education establishment asserts that students who perform well on gifted and talented assessments or the Specialized High School Admissions Test, or anything else that might suggest they already know material they are not yet scheduled to be taught, aren’t gifted or talented. They are merely privileged to have come across it outside the sanctioned school system.

Adams: Have We Been Misled All This Time About What New York City’s Gifted & Talented and Specialized HS Exams Really Measure?

What difference does it make?

If the goal is to make everyone the same, we’ll have to ban any sort of outside tutoring and any sort of extracurricular activity. There can be no independent reading or watching YouTube videos and absolutely, positively no parents answering their child’s “Why” questions, unless they’ve checked their handy-dandy DOE-issued timelines and ensured that all other children in the five boroughs are having those exact same questions answered at the exact same time, in the exact same way.

Am I being ridiculous?

Is it ridiculous to care less about when a child masters skills than that all children have the opportunity to master them?

Is it ridiculous to believe that a school system should be able to accommodate both the — there’s no question about it — overprivileged and the underprivileged without sentencing some to spin their wheels while they’re being shackled to school via an arbitrary birth date, and others to flounder as they’re socially promoted beyond their current skill set, making it harder and less likely for them to ever catch up until they’re tossed out of school via that same arbitrary birth date?

Is it ridiculous to want equity over equality?