40% of America’s Public Schools Don’t Have a Single Educator of Color. How the New Nonprofit BranchED Is Looking to Rethink That Minority Teacher Pipeline 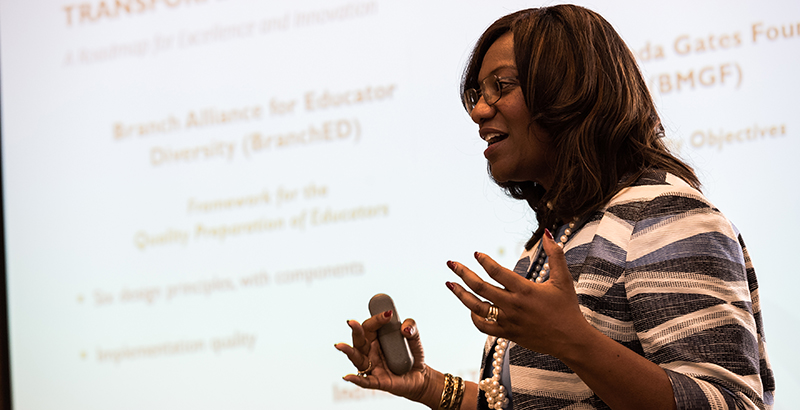 As a teacher trainer at a historically black college, Nakeshia Williams runs up against a frequent tension.

Williams, an associate professor at the Department of Educator Preparation at North Carolina A&T State University, regularly meets with area superintendents about hiring her future graduates. She finds officials eager to hire her students — teacher shortages abound in North Carolina — but skeptical of the quality of the teacher preparation they’re receiving.

“A common misconception I’ve encountered is … that the quality you receive at a historically black college or university seems to be less” than that of a predominantly white institution, Williams said.

This challenge is not unique to these schools, experts say, and is shared across institutions of higher education that serve significant percentages of minority students — schools designated by the federal government as minority-serving institutions.

Negative views of such schools are not grounded in reality, according to researchers who study teacher prep programs, but they hamper a pipeline critical to diversifying the teaching workforce, which is 80 percent white. Even though minority-serving institutions represent just 13 percent of colleges and universities, they prepare 48 percent of teachers of color.

This tension prompted Cassandra Herring to recently launch the Branch Alliance for Educator Diversity, or BranchED, a new nonprofit designed to support minority-serving institutions with teacher preparation programs. The first such organization of its kind, the program is named after Mary Branch, who in the early 20th century became the first woman of color to serve as president of an accredited four-year college in the United States.

Herring, who formerly served as dean of the School of Education and Human Development at Hampton University, an HBCU, grew frustrated with efforts by higher education officials across the country to lower standards for applicants to teacher preparation programs in order to attract more candidates of color. In 2016, the U.S. Department of Education removed the requirement that teacher preparation programs “maintain a high bar of selectivity” for applicants, a step it said was intended to “allow programs to recruit a more diverse student body.”

“I think we as a country understand that it’s important to diversify the teaching force, but it’s a hugely complicated … issue,” said Herring. “Unfortunately, the national conversation in some areas is we need to lower the standards of quality in order to get to diversity. It feels like and sounds like it’s a one-or-the-other proposition. BranchED stands against that. If diversity is a component of quality, then we have to be trying to strive for both simultaneously. We can’t shortcut one to get to the other.”

Backed by philanthropists like the the Bill & Melinda Gates Foundation and the Charles and Lynn Schusterman Family Foundation, BranchED is offering support in several ways. The most basic support is sharing resources and increasing awareness through newsletters and a private online community. BranchED also organizes conferences for college officials and educators, as well as on-site coaching and guidance.

Thanks to interest from non-minority-serving institutions, BranchED’s events now attract administrators from a broader array of universities and even from K-12 schools. BranchED also recently released a public version of its framework for high-quality educator preparation so more colleges can access it.

According to the Center for Minority Serving Institutions at the University of Pennsylvania, there were 860 colleges across the country in 2017 whose enrollment qualified them for the federal designation. Hispanic-serving institutions represent just over half of all such colleges.

BranchED focuses on a subset of about 250 of the minority-serving schools that have teacher prep programs at the undergraduate or graduate levels. BranchED’s goal is to reach half of these schools in the next five years.

The schools need the support. By definition, they serve students who have historically been underrepresented in higher education; nearly half of the students who attend such schools are the first in their family to attend college. More than 50 percent of these students receive Pell Grants for financial need, even though tuition at their schools is, on average, half that of predominantly white institutions. Minority-serving colleges are less likely to have built up the financial resources of majority institutions. In 2016, the federal government disbursed $817 million in grants to hundreds of these schools, but the gap is large. According to a 2017 report in Bloomberg BusinessWeek, of the 90 schools with billion-dollar endowments, not one is a historically black college or university. Howard University has the largest endowment of any HBCU, $578 million, which is less than 2 percent the size of Harvard’s, which has the largest of any university, $35.7 billion.

“The reason we need more support … is these institutions are simultaneously charged with preparing the students whom we claim to want to invest in, and are the institutions [that] have been on the receiving end of particularly damaging disinvestment,” said Andrés Castro Samayoa, an assistant professor at Boston College’s Lynch School of Education. “Given their history, they have had challenges securing endowments that are comparable to other institutions.”

More than half of K-12 public school students in the United States are low-income, and more than 50 percent are members of a racial minority group. But 40 percent of American public schools have no teachers of color. 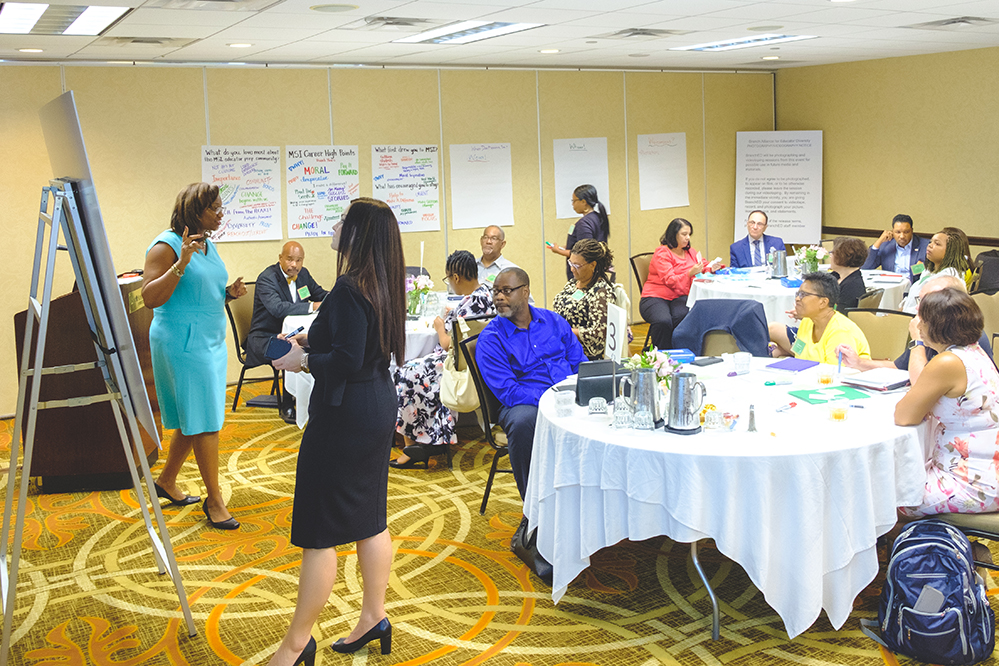 BranchED regularly organizes conferences for administrators at minority-serving institutions to learn from one another. (Courtesy of BranchED)

A growing body of research finds that the gulf between the races of public school students and their teachers is negatively impacting students of color, who perform better with teachers of the same race. In particular, researchers last year found that black boys who had a black teacher between third and fifth grades were significantly less likely to drop out of high school. Black boys and girls were more likely to attend college if they had had a black teacher in grades 3-5, according to the study.

Everyone from KIPP to the National Education Association supports hiring more of the teachers whom minority-serving programs graduate, but it’s not so simple. Beyond the fact that there are not enough minority college students, teachers of color do not tend to stay in the classroom as long as other teachers.

Lynnette Mawhinney chairs the department of curriculum and instruction at the University of Illinois at Chicago, which qualifies as both a Hispanic-serving institution and a Native American/Pacific Islander-serving institution. She previously taught in Philadelphia and on a Native American reservation in South Dakota, and she said teachers of color confront particular challenges when they start their careers.

“Oftentimes, teachers of color will go into more under-resourced schools, which means they have more burdens and stresses on them,” she said. “Or some will go into more-white schools” and experience more incidents of racial bias.

As for the quality of the teacher preparation programs at minority-serving institutions, it’s all relative, experts say. Most teacher prep programs are not high-quality, according to Rob Rickenbrode of the National Council on Teacher Quality. The Council produces the only review of teacher training programs, and while the report does not focus on every program, it does include the programs that are responsible for about 90 percent of teaching graduates. Based on that sample and the categories the report focuses on, Rickenbrode said minority-serving institutions are no different or slightly better than their less diverse peers.

Among other things, BranchED hopes to make that reality known to thousands more educators around the country.

“Ultimately, what we all want is that graduates of these programs have a stronger impact on the children that they serve in K-12,” said Herring, the CEO. “Our stance is that our very definition of what constitutes quality needs to shift in light of the changing demographics in the classroom.”

Disclosure: The Bill & Melinda Gates Foundation and the Charles and Lynn Schusterman Family Foundation provide financial support to The 74.