‘I Live in the Same Space as You’: As Districts Nationwide Struggle With Diversity, How One L.A. School Network Is Recruiting Teachers Who Look Like the Classrooms They Lead 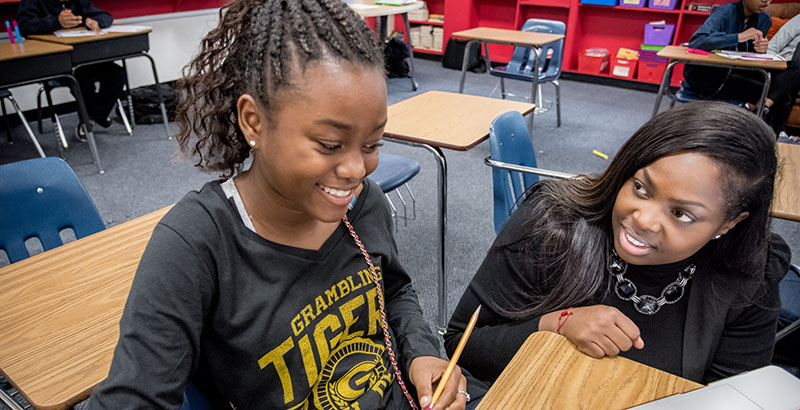 Each year, on the first day of school at KIPP Academy of Opportunity in South Los Angeles, teacher Kasi Moore-Watts has a reliable way of getting her students’ attention.

Her mom was on drugs, Moore-Watts tells them, and her grandparents raised her. When she shares her background with students, she said, she sees “heads that might’ve been hidden under a hoodie kind of pop out and be like, ‘That’s my story, too.’”

Moore-Watts grew up seven miles from the middle school, and after eight years of teaching at private Catholic schools in greater Los Angeles, she sought to return. This made her an appealing candidate when a friend of a friend shared her résumé with the school’s then-principal.

Moore-Watts did a phone interview with the principal on a Tuesday, a demo lesson on Wednesday, and by that Wednesday afternoon, she had an offer.

“She called me a unicorn,” Moore-Watts said. 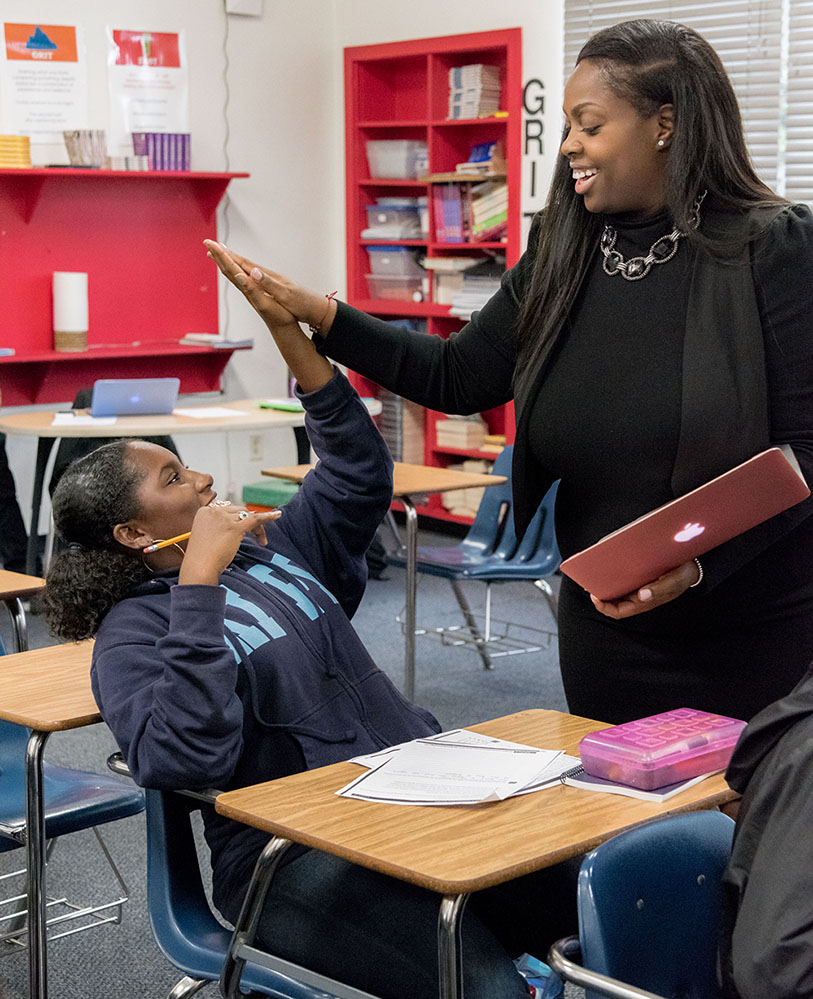 Moore-Watts’s hiring experience speaks both to the scarcity of high-quality black and Latino teaching candidates and to the eagerness with which KIPP LA Public Schools and schools across the country are seeking them out. Nationally, whites now make up less than 50 percent of K-12 students but more than 75 percent of the teachers. A quarter of public school students are Latino, but only 8 percent of teachers identify that way. Black and Latino males make up just 2 percent of K-12 teachers.

But as research increasingly shows that students’ academic performance, graduation rates, and persistence through school all improve when they have teachers who share their background, increasing teacher diversity has become a cause strong enough to unite the American Federation of Teachers, Teach for America, and the U.S. Department of Education. A study released last year by the Institute of Labor Economics found that “assigning a black male to a black teacher in the third, fourth, or fifth grades significantly reduces the probability that [the student] drops out of high school, particularly among the most economically disadvantaged black males.”

In the midst of a national teacher shortage, this accumulation of evidence has resulted in schools across the country pushing to attract more black and Latino teachers, especially those who hail from communities close to their would-be schools.

Promoting diversity is not a new strategy for KIPP LA, but it has doubled down on it in recent years. Since 2017, KIPP LA has created a standalone team focusing on recruitment, credentialing, and performance management, and expanded it from one person to six. The team has led an aggressive marketing and recruitment campaign, putting particular emphasis on referrals from current teachers of color and on its partnership with Teach for America (TFA), which has nearly tripled the number of new teachers placed with KIPP LA.

For the 2017-18 school year, 40 percent of KIPP LA’s 368 teachers identify as Latino and 17 percent identify as African-American or black.

“I was almost in culture shock myself to see all of the people of color,” said Moore-Watts. “The principal was an Asian woman. One dean was an African-American man. The other dean was a Latina woman. This is not what I’ve ever seen in my eight years of being in education.”

Emily Fizer, a biracial, trilingual TFA alumna, serves as the network’s senior manager of talent acquisition. She identifies as half Korean and half white, but she did not have a single Asian teacher until she got to college. As recent reports have highlighted how minority candidates fall through the cracks at each step of the hiring process, Fizer conducts regular reviews of the race, ethnicity, and geographic backgrounds of KIPP LA’s applicants and its hires.

“It would be a problem if we saw a diverse pool of candidates but our actual hires did not represent that,” she said.

As a result, most school leaders and all of the new talent team went through professional development that involved testing for implicit biases and learning how to be an inclusive organization. After the training, for example, KIPP LA changed the evaluation criteria it uses for hiring, retention, and promotion, removing those competencies that could be susceptible to bias, such as professionalism, which, Fizer said, is “very, very broad.”

“During an in-person interview, a school leader might assume that the candidate needs to bring printed copies of their résumé, and if they don’t, someone could potentially think they’re not exhibiting professionalism because they did not come prepared,” she said. But, Fizer asked, what if a low-income candidate could not afford a printer?

To lower other barriers to entry, KIPP LA provides up to $7,000 in aid to support new and out-of-state teachers with earning a teacher credential in California, and provides free access to a home-finding service. Salaries at KIPP LA, according to documentation shared with prospective teachers, are “competitive above regional market rate.”

Whether it’s correlation or causation is too early to tell, but KIPP LA’s diverse workforce has seen strong academic results — its schools outperformed LAUSD and the state in both math and English on the 2017 California state tests. Twenty percent of its schools have received the U.S. Department of Education’s National Blue Ribbon Award.

As KIPP LA’s network has grown to 6,600 students today, it has increasingly leaned on its partnership with Teach for America–LA to fill teacher vacancies with diverse candidates. Once accused of lacking racial diversity — “privileging whiteness,” in the words of two alumni — Teach for America has transformed the demographics of its corps. In September 2017, CEO Elisa Villanueva Beard noted that for the fourth straight year, more than a third of TFA’s 3,500 recruits were the first in their families to graduate from college. About half identified as a person of color, compared to less than one-third in 2010.

TFA’s Los Angeles region is a particularly strong match for KIPP LA — its corps is 79 percent people of color, and three-quarters of its members continue teaching for at least a third year, according to TFA-LA executive director Lida Jennings. TFA-LA’s retention rate among teachers of color is higher than that of those who don’t identify as teachers of color. Thirty-two TFA corps members were placed in KIPP LA schools in 2017-18, up from 12 in 2016-17.

Meanwhile, in New York, “nearly half of White students—or more than 560,000 — are enrolled in schools without a single Latino or Black teacher,” according to an October report by The Education Trust–New York.

As much progress as KIPP LA is making, Michael Hansen, who directs the Brown Center on Education Policy at the Brookings Institution, believes that until the pool of potential teachers grows larger, the strategy of increasing teacher diversity is limited. “It’s great they can get [teachers of color] to come to KIPP LA, but if you think about it, it’s still a zero-sum game,” Hansen said. “If KIPP LA is successful on the margins in getting teachers, presumably there are schools in [Los Angeles Unified School District] or Orange County who won’t have those teachers.”

Especially in light of the 80 percent increase in Latino school enrollment between 1999 and 2016, what needs to dramatically change, Hansen said, is the percentage of black and Latino students going to college, earning four-year degrees, and deciding to become teachers. Presently, only 15 percent of Latinos are earning bachelor’s degrees, compared with 22 percent of blacks and 41 percent of whites.

That’s the riddle that KIPP LA and its teachers, including Maria Morfin, are trying to solve. 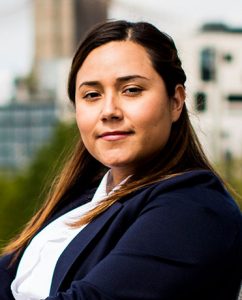 A Los Angeles native, Morfin returned to the community where she grew up after serving her Teach for America commitment in Dallas. She joined KIPP Sol Academy in East Los Angeles as a fifth-grade teacher and won TNTP’s prestigious Fishman Prize for Superlative Classroom Practice in 2017.

“The work I did [in Dallas], it didn’t feel nearly as important as the work I’m doing here,” said Morfin, who identifies as Latina. “The connection to the place where I grew up and knowing the community and some of the lived experiences, it makes this work very personal and important to me in a way that it didn’t in Dallas, even though the population and demographics were similar.”

Morfin, who studied economics in college, said that some efforts to recruit black and Latino teachers “[don’t] mathematically make sense” given the current rates at which those students graduate from college. Until those rates improve, Morfin said, schools should also focus on being more culturally responsive, citing the community walks and mapping of local resources her school’s staff participates in to get more acclimated with the neighborhoods where their students and families live.

“I run into kids everyday,” she said. “Walking my dogs. Going to the grocery store. Those interactions are particularly important for kids and for me. It’s an example that I’m not a stranger to your community. I live in the same space as you. I have some understanding.”