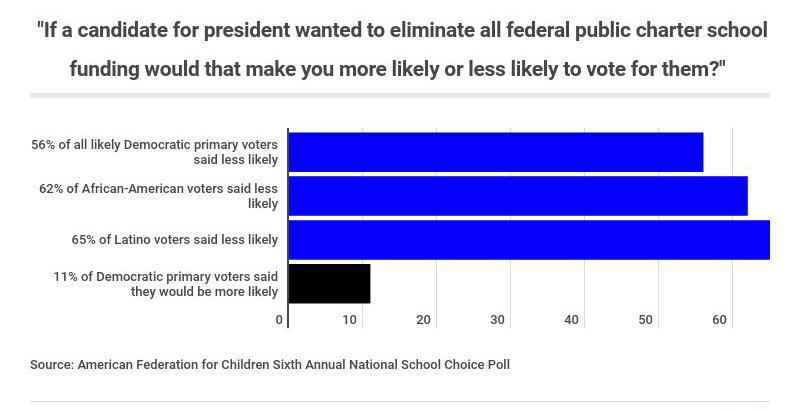 With the 2020 presidential primaries about to kick off in Iowa, a new poll shows that a majority of voters are less likely to support candidates who want to eliminate federal charter school funding.

The results of the sixth annual poll, conducted for the American Federation for Children, an organization that advocates for school choice, come as several top Democratic candidates, including Sens. Bernie Sanders and Elizabeth Warren, have called for temporarily halting or permanently scrapping the $340 million program. Fifty-six percent of Democrats planning to vote in the primaries said such a position would make them less likely to support a particular candidate, and the figures were higher for African Americans (62 percent) and Latinos (65 percent), according to the AFC poll.

Only 11 percent of likely voters said they were more apt to support a candidate who would eliminate funding.

The national phone survey of 1,250 people likely to vote in November 2020 was conducted in English and Spanish from January 7-13 by Beck Research. The poll has a margin of error of plus or minus 3.5 percentage points. In terms of the presidential candidates, the survey asked: “If a candidate for President wanted to eliminate all federal public charter school funding would that make you more likely or less likely to vote for them?”

Overall, voters’ support for school choice inched higher than in previous AFC polls, with 69 percent of respondents now supporting the concept and 25 percent opposing. More respondents are specifically in favor of federal tax-credit scholarships, which allow individuals and companies to contribute to designated nonprofit organizations that then award educational scholarships. Families can use the scholarships to cover tuition costs or other educational expenses, while contributors receive a dollar-for-dollar tax break.

About 18 states have their own versions of these programs, which in total enroll about 500,000 students. The Supreme Court heard a case earlier this week out of Montana that could allow for broader use of taxpayer dollars for education at private schools, including religiously affiliated schools. In the education plan Warren released in October, she wrote that “we must resist efforts to divert public funds out of traditional public schools.”

Schultz said he believed the growing level of support for tax-credit scholarships — 78 percent, up from 69 percent last year — is partly due to Secretary of Education Betsy DeVos announcing a $5 billion proposal in February 2019 to fund the tax credits. Sen. Ted Cruz of Texas, who introduced a corresponding bill in the Senate, is among the lawmakers who have championed the cause. Last month, DeVos, Cruz and President Trump rallied support at a White House discussion with students and families who participate in state-based choice programs.

“But now is the time to fight for the forgotten child, and that’s what we’re doing with respect to education,” Trump said. “For decades, countless children have been trapped in failing government schools. In my administration, these children are forgotten no longer.”

DeVos, who founded and formerly chaired the American Federation for Children, is a longtime advocate of choice, but her unpopularity among voters — polls have consistently found her to be the least popular Cabinet member — has been seen by some as eroding bipartisan support for school choice, including charter schools. The House and Senate bills tied to her proposal were introduced nearly a year ago, and the total number of co-sponsors has grown from 67 to 112 since The 74 sat down with DeVos in June. But with only Republican lawmakers currently supporting the bill, its prospects are doomed in the Democratically controlled House of Representatives.

The AFC poll found strong dissatisfaction with the school where respondents send their children and a significant willingness to enroll their children in another school. Half of parents surveyed said they would prefer an alternative to their traditional public school, and 47 percent of parents said they would drive their child 25 miles each way to a private school for free, as it could be with the proposed tax-credit scholarships, or to a different public school.

Schultz believes the poll results paint a positive picture for AFC’s core issue. Millennials now comprise the largest generation, he noted, and this group — born between 1981 and 1996 — are increasingly having children and making choices about school. Millennials and members of the younger Generation Z registered the most positive feelings toward school choice, at 71 percent.

“When parents are faced with a decision about schooling,” Schultz said, “they’re looking at options now.”

The Dick & Betsy DeVos Family Foundation provided funding to The 74 from 2014 to 2016. Campbell Brown co-founded The 74 and sits on its board of directors. She formerly served on the board of the American Federation for Children. Brown played no part in the reporting or editing of this article.