Millennials may loathe diamonds and scorn grocery shopping, but there’s at least one thing they seem to like: school choice.

According to recent polls, adults who were born between 1981 and 1996 tend to think favorably about charter schools, vouchers, and other types of education options for parents and students. That could be because millennials were raised in an era saturated with choices, from ride-sharing apps to online shopping retailers to music streaming services.

That was the theory posed by a panel discussion Wednesday at South by Southwest Education called “Millennials Matter: Ed Reformers Need to Hear Us.” The panel was presented by the nonprofit advocacy group EdChoice and moderated by The 74 Senior Editor Emmeline Zhao, and it included panelists Mendell Grinter of the Campaign for School Equity, Lalla Morris of Families Empowered, and Evy Valencia Jackson of EVJ Consulting.

According to a 2017 GenForward survey, nearly three-quarters of millennials across ethnicities support school vouchers — public money that pays for students to attend private school — for low-income children, and about two-thirds support this option for all students. African Americans are the most likely group to support charter schools — which are independently run and publicly funded — with 65 percent in favor. Whites were the least likely, with 55 percent supporting charters. Another poll, from the American Federation for Children, found that 75 percent of millennials support choice, compared with 64 percent of baby boomers. But not everyone is a fan of school choice: Support often depends on how a question is phrased. For example, when a 2016 Education Next poll tried to test support for vouchers, it found that 45 percent of respondents were in favor when the question was framed around giving people choice, but only 29 percent were in favor when it was framed around using public money to fund the program. 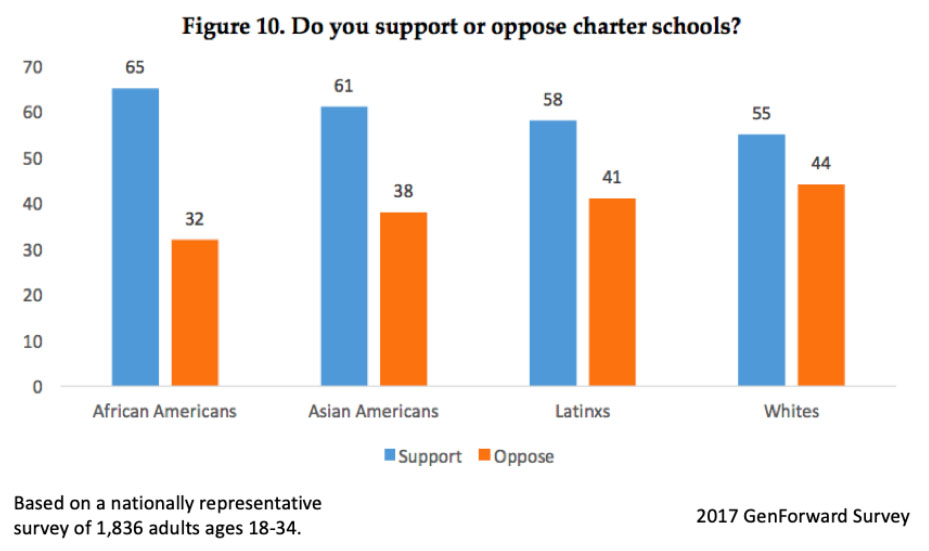 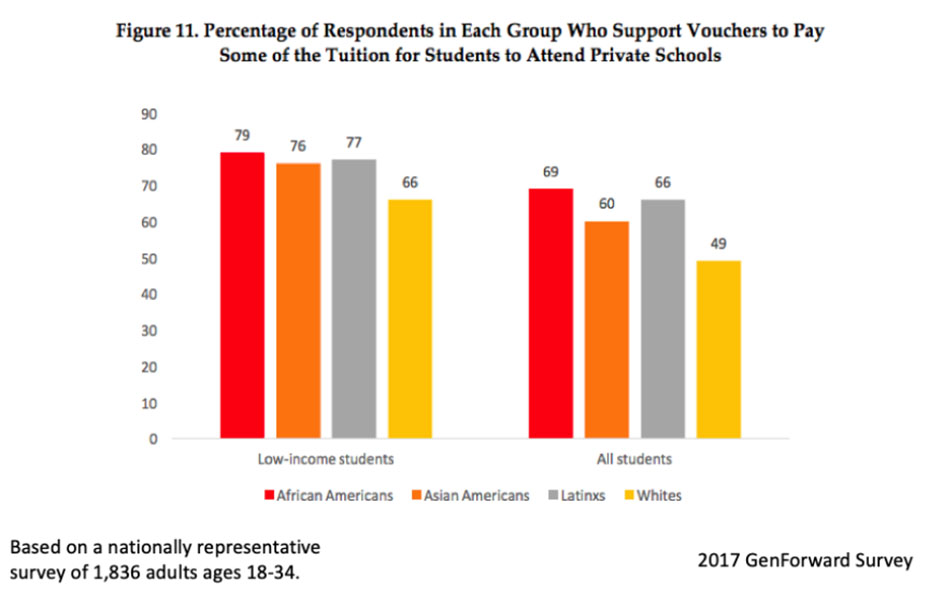 While the internet is full of memes that love to hate on how millennials are changing the world (avocado toast > mortgages), the conversation becomes more serious when looking at the effect of this demographic on the labor market and government. Zhao noted that these young adults represent the largest segment of the U.S. labor force, with 56 million workers. While millennials made up only 1 percent of the members of the House of Representatives in 2017, that number jumped to 6 percent this year.

The panelists argued that without widely available school options, choice is afforded only to those with resources to select which neighborhood they want to live in or the private school they want to send their children to.

“If you are financially constrained, there are lots of choices people make every day that you never have the opportunity to make,” Morris said.

She recalled how her family sent her to several different schools in Texas before she ended up at a middle school where she had access to rigorous academic courses — something not available to many other students of color in her neighborhood. This set her up to attend a prestigious magnet high school in Houston, where she was also one of the few students of color on the Advanced Placement track. This made Morris realize how the choices her parents were able to make set her up for success in ways that many of her black peers without these resources were not.

The U.S. has nearly 7,000 charter schools, enrolling 3.2 million students in 43 states and Washington, D.C. About 500,000 students take advantage of private school choice options such as vouchers or tax-credit scholarships, which exist in 26 states. These numbers are still small compared with the total number of K-12 students in public and private schools: 56 million.

The freedom afforded to charter schools gives opportunities for innovation and allows students to focus on topics outside the scope of traditional schools. Panelists praised the creativity of school leaders who they’ve seen start schools framed around everything from farming to fine arts to financial literacy.

“The purpose of education is to create an informed and engaged citizenry that can live independently, live a dignified life, and also be engaged in our community,” Morris said.

Although nationwide, charter schools have produced mixed results for students, Grinter said parents consider many factors in addition to academics and graduation rates when selecting a school. “What defines a good school for a lot of parents is its safety,” he said.

Some members on the panel pointed out that while charters and vouchers remain controversial, some government-funded programs — such as Pell Grants — that provide students money and choice in education do not receive that kind of criticism.

An audience member pointed out that many millennials also support teacher unions, which often butt heads with school choice advocates. A GenForward survey from 2018 found that three-quarters of millennials say strengthening teacher unions would improve education.

Grinter said that more work could be done to reach out to teachers and have conversations about where their views intersected or differed.

“It’s just talking to them, like, ‘Hey, you have a kid, you want to exercise choice, why is that not OK?’” he said.

“Some of these folks are just not interested in a conversation and haven’t been interested in a while, and that’s OK,” she said. “I think we have to be willing to move on and build new supporters elsewhere that want to be focused on kids.”

Though many leaders in the education reform world are older than millennials, Valencia Jackson encouraged the audience to collaborate across generations so that her peers could also have a voice in the conversations around school choice. “Call me, beep me!” Valencia Jackson said. “Anyone?”

A few people in the room got the joke. You would have too, if you were a millennial.