Are the Title IX Regulations Proposed by DeVos a Step in the Right Direction? Experts Debate Consequences at AEI Event 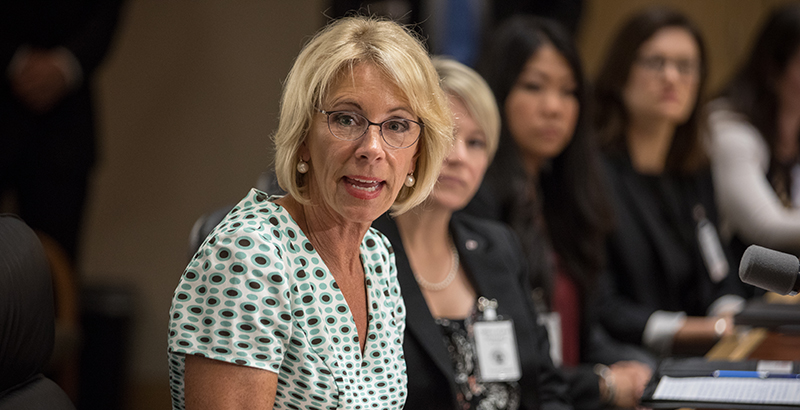 The Education Department’s proposed rules outlining how schools should handle sexual misconduct allegations bolster the rights of accused students, narrow the definition of harassment and allow schools to adopt a higher standard of proof. The proposed changes — which come amid a national reckoning on sexual misconduct — have received significant attention, including pushback within the education community.

But are they a step in the right direction? That’s the question experts debated last week at the American Enterprise Institute, a conservative think tank.

The proposed regulations, released by the Education Department in November, center on schools’ obligations under Title IX, the 1972 law that prohibits sex discrimination at schools that receive federal funding, and offer a significant policy shift from guidance under the Obama administration. At the AEI event, there was little common ground between the proponents and critics of the proposed changes.

While proponents viewed them as a victory for the rule of law and due process, critics said the proposal offers a major setback for victims and could discourage reporting. Much of the debate centered on whether sexual misconduct cases should resemble criminal trials; under the proposed regulations, the process would differ between K-12 schools and college campuses.

Under Obama-era guidance, the Education Department’s Office for Civil Rights allowed a single person to serve as “the police, the judge and the jury in sexual harassment cases,” argued Shep Melnick, a political science professor at Boston College. But in a win for due process rights, he said, investigations would include live hearings and cross-examination. Such hearings would be required at the college level but optional in K-12 settings.

Before proposing the regulations, the Betsy DeVos-led Education Department rescinded Obama-era guidance on Title IX that called on schools to better investigate misconduct complaints and required them to use a “preponderance of the evidence” standard when adjudicating complaints. Under that standard, those accused of misconduct are held responsible if evidence shows that a violation is more likely to have occurred than not. Some critics have held that that standard stripped the accused of their due process rights. Under the proposed guidance, institutions would be able to choose whether to use the “preponderance of the evidence” standard or the “clear and convincing evidence standard,” which sets a higher burden of proof.

The Supreme Court has called cross-examination “the greatest legal engine ever invented in the discovery of truth,” noted Tamara Rice Lave, a law professor at the University of Miami, who supports the proposed regulations. She maintains that the single-investigator model could lead to confirmation bias.

“This bias doesn’t just impact the accused,” she said. “A Title IX investigator may believe that a victim is lying, and once they come to that belief, they simply cannot see the evidence that shows she’s telling the truth.” She added that it’s “demonstrably more difficult for a witness to consistently answer spontaneous questions under a live cross-examination if he is being insincere.”

Critics of the proposed regulations focused on the chilling effect the changes could have on victims. Seth Galanter, senior director at the National Center for Youth Law, who worked for the Office for Civil Rights during the Obama administration, argued that victims would be subjected to lengthy investigations with little opportunity to appeal.

“As you look back and you ask yourself, ‘Was it worth filing this complaint in the first place, or should I have just been silent?’ The Trump-DeVos regulations encourage silence,” Galanter said.

“When an adult cross-examines someone younger, that does not yield more accurate results,” he said. “Cross-examination can lead to falsehoods, and, more generally, many times cross-examination leads to [believing] someone is lying when they’re not.”

While previous administrations have viewed sexual harassment as a civil rights violation, she said, the proposed Trump administration regulations would treat misconduct only as a crime. And if it doesn’t meet the criminal standard, “that’s something to be ignored and tolerated.”

“Criminal law is not structured to provide remedies to the victims so they can retain their equal educational opportunities after being victimized,” she said. “If we allow the DeVos proposals to turn Title IX into a criminal or even quasi-criminal law, we will eliminate Title IX’s ability to provide such remedies and to fulfill its purpose of fighting inequality.”

Under AEI’s debate structure, the winner is determined based on which side changed the minds of the most audience members. In this case, about a third of the audience was undecided before the debate began. And while a majority of attendees voted — before and after the event — that the proposed regulations were a step in the wrong direction, proponents were more effective in swaying opinions.