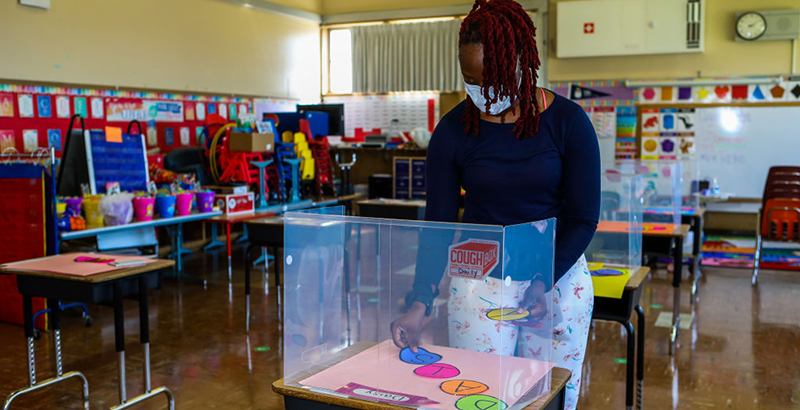 Oakland, California is among the 36 percent of top districts to require COVID shots for teachers. (Yalonda M. James/Getty Images)

With the vast majority of U.S. students once again learning in classrooms, 180 of the largest 500 U.S. school districts have enacted requirements for their staff to be vaccinated against COVID-19, according to an analysis published Monday by Burbio, an organization that has tracked school safety policies through the pandemic.

It’s a safety measure that health experts say represents a key step toward improved coronavirus safety in school — especially as younger students remain ineligible for shots likely until November. Although children rarely fall seriously ill from the virus, young people still make up more than a quarter of new cases in the U.S. and school-based outbreaks have triggered some 2,265 closures across 580 districts already in 2021-22.

“Most pediatricians that I’ve spoken with … absolutely support vaccine mandates for teachers,” Kristina Deeter, professor of pediatric medicine at University of Nevada, Reno School of Medicine, told The 74. “It’s the right thing to do.”

In 11 states, coronavirus vaccines are mandated for teachers statewide, the University of Washington’s Center on Reinventing Public Education reports, meaning a considerable share of the 180 districts with staff mandates enacted such policies because state law required it.

Still, vaccination rules vary from district to district, with some mandates having already kicked in and others not taking effect until next month.

Some school systems have more lenient policies, such as Philadelphia, which acknowledged that unvaccinated teachers will not lose their jobs, though they will be subject to twice-weekly testing. Others impose stricter sanctions, like New York City, which is barring unvaccinated teachers from entering school buildings and putting them on unpaid leave until they get the shot.

Even those districts where staff have a choice between vaccination or regular testing are included in the 36 percent tally, Burbio co-founder Dennis Roche confirmed to The 74.

The New York City mandate, which took effect Oct. 4 after a brief legal challenge, applies to roughly 150,000 people who work in the nation’s largest school system, and compelled thousands of employees to receive their shots in the weeks before the rule took effect. Some 96 percent of teachers in the district have now been immunized against COVID-19, The New York Times reported.

By contrast, Los Angeles, the country’s second-largest school system, on Monday extended its deadline for employees to receive their shots from Oct. 15 to Nov. 15, fearing that strict enforcement would exacerbate staffing challenges and lead to major disruptions. Unlike the New York City mandate, the L.A. rule requires two doses before the deadline for educators receiving the Moderna or Pfizer vaccine.

While many teacher mandates are in deep blue states, the San Antonio Independent School District has an immunization requirement set to go into effect Oct. 15. Earlier this month, the district’s rule survived a legal challenge from Texas Attorney General Ken Paxton when a county judge denied the state’s motion to secure a temporary injunction on the mandate. A ruling on the policy from a higher court is expected in days.

Meanwhile, on Monday, Texas Gov. Greg Abbott issued an executive order banning all COVID-19 vaccine mandates in the state, including for private employers.

“We are reviewing the new executive order and consulting with our legal counsel and Board of Trustees to determine how the district will proceed with its employee vaccine mandate,” a San Antonio ISD spokesperson wrote in an email to The 74.

In lieu of mandates, other Texas districts are providing cash incentives for teachers who roll up their sleeves. Houston, Dallas and Fort Worth each deliver $500 bonuses to fully vaccinated educators.

Vaccine mandates for students remain much more rare, with only a select few districts having implemented such rules. California districts Los Angeles, Oakland and Culver City as well as Hoboken, New Jersey have each made immunization a requirement for in-person school for vaccine-eligible students, with deadlines in the coming months. Washington, D.C. is mulling a similar policy.

In early October, California Gov. Gavin Newsom announced that coronavirus vaccines will be required for all eligible students in the state, though the rule will likely not go into effect until July 2022.

Burbio’s count that 36 percent of top districts require teachers to be immunized comes as the rush to embrace such policies has slowed considerably. After eight states moved to enact educator mandates in late August and early September, only one — Delaware — has added a similar rule since then, CRPE reports.

But even as COVID case counts fall nationwide, Deeter, the pediatrics professor, warns that now is not time for the country to let down its guard.

“As the surge goes down … now everybody’s like ‘Yay! [The pandemic] is over.’ It’s not over. It’s not even close to over. We are just prepping for the next wave,” she said. “We have to prepare.”