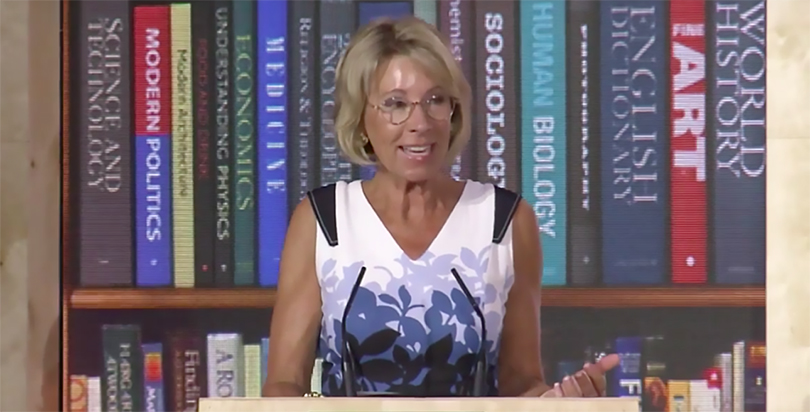 Breaking coverage of Betsy DeVos today at The 74:

—Mark Keierleber: New to Team Trump, DeVos has long been on Team Pence

Get more news on the Trump transition and analysis of the DeVos nomination; sign up for The 74 newsletter.

Donald Trump made it official Wednesday afternoon: After weeks of speculation that saw dozens of high-profile contenders surface from across the political spectrum, the president-elect announced he will nominate philanthropist, education-reform advocate and American Federation for Children chair Betsy DeVos to be the nation’s next education secretary.

I am honored to work with the President-elect on his vision to make American education great again. The status quo in ed is not acceptable.

A vocal proponent of school choice and vouchers, DeVos has also been an advocate for high national standards. Press coverage of her meeting with Trump last weekend focused almost exclusively on the issue of national benchmarks; Education Week noted that the transition team said the conversation was “focused on the Common Core mission, and setting higher national standards and promoting the growth of school choice across the nation.”

A year ago, in the lead-up to our New Hampshire Education Summit, which was sponsored by the American Federation for Children and featured many of the top contenders for the Republican nomination sitting down to speak in-depth about America’s K-12 education issues, The 74 sat down with DeVos for a conversation about schools, standards and the shifting political coalition that supports school-choice efforts.

Here are a few of the notable exchanges from last year’s conversations. The full interview will be published Monday; for the latest news and analysis on the Trump transition, sign up for The 74 newsletter.

The 74: Beyond all the bickering, jargon and egos of Washington, D.C., what does school choice for families truly mean? What’s the ultimate takeaway that you wish everyone could know — if there weren’t so many politicians fighting?

Betsy DeVos: I think the ultimate takeaway is: How are we going to really, truly ensure that every child has the opportunity to become everything he or she can be? When you consider education as a really fundamental part of anyone’s future, without a good education — without preparation to navigate not only today’s world but the world 20 to 30 years from now, without the ability to think critically and to be able to tap into the innate talents that each individual is endowed with — without unlocking those things, we all as a society suffer.

And so I think that if we can continue to draw people’s attention back to the importance of every single child developing their fullest potential, and how that is best accomplished. We believe it’s best accomplished by empowering their parents and the students themselves to make the right choices for their future.

That comes fundamentally down to how they get educated and how they prepare.

You mentioned in a previous interview that you’ve seen a growing number of Democrats interested in the school-choice issue, more than ever before. Why is that happening in the movement toward school choice, and how do you expect that dynamic to play out in the 2016 election?

We have seen more and more Democrats elected to state legislatures embrace [school choice] because the reality is that most if not all of them know in their heart of hearts that this is the right thing for their constituents.

Yet many of them have been afraid to cast the votes needed to make these policy changes. So we can come alongside them and, first of all, help them understand how changes in policies can help unleash and tap into new potentials for empowering parents and children. And we can also demonstrate to them that it can be safe politically for them to support these ideas, and that their constituents are ultimately the ones who are going to benefit.

More broadly, their state and our nation will benefit as more and more kids have the opportunity to develop their fullest potential.

More of the interview will be published Monday; for the latest news on the Department of Education and analysis of the Trump transition, sign up for The 74 newsletter.