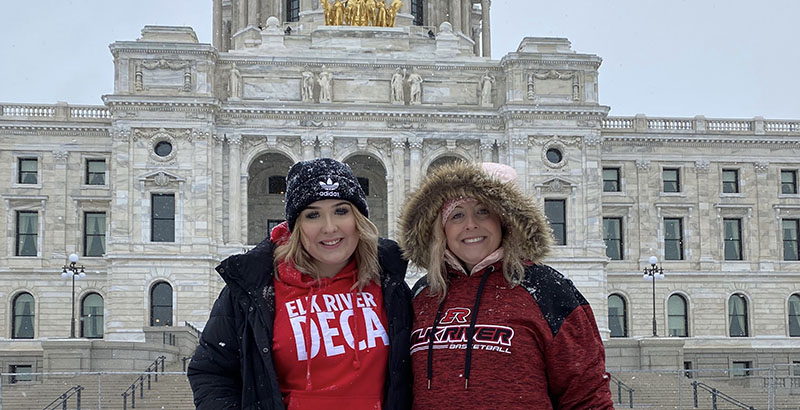 Sarah Ronchak, right, part of Open Schools USA, and daughter, Paige Kinowski, who graduated in 2020, spoke at the Minnesota state capitol in December about reopening. Ronchak plans to homeschool her other two children this fall. (Courtesy of Sarah Ronchak)

Momentum may be building toward a full school reopening this fall, but some families say it’s too late.

“My daughter will never go back to public school,” said Michelle Walker of McMinnville, Oregon, outside Portland. She took out a loan to move her fourth-grader MacKenzie into a private school and is working to mobilize families in reopening groups across the country to do something similar. 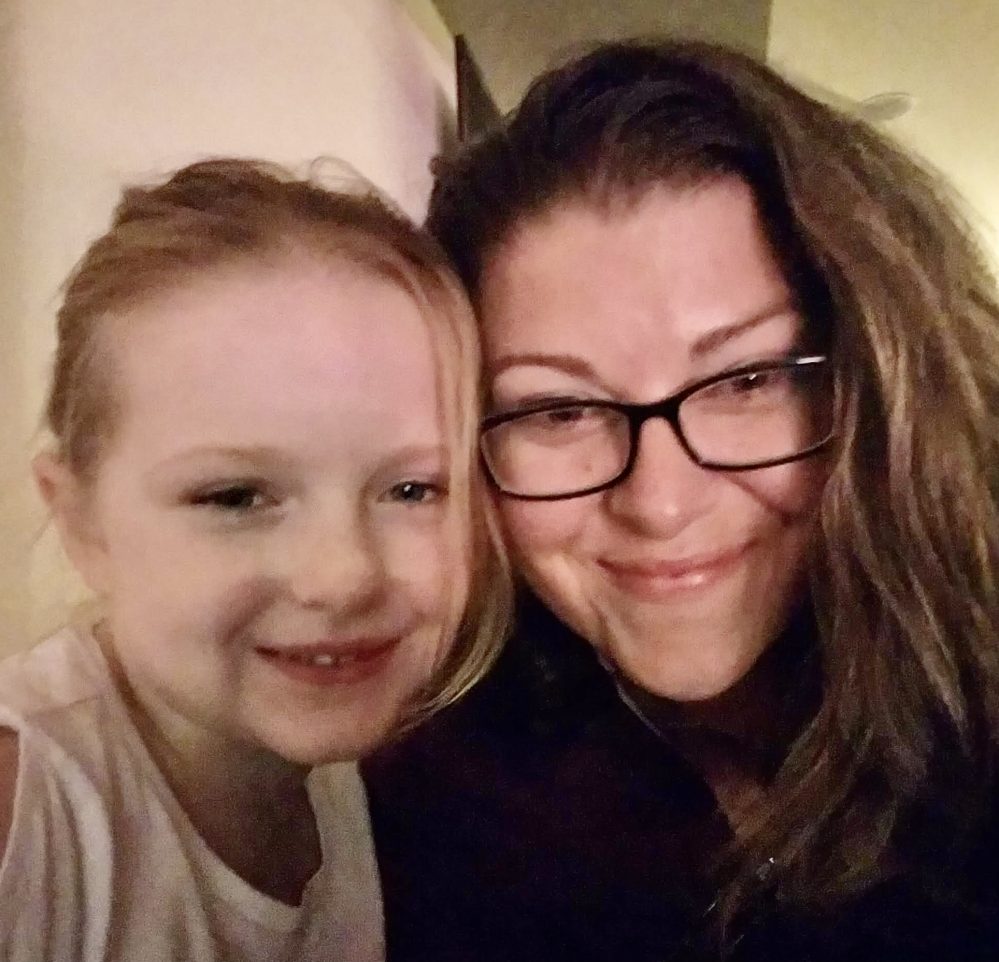 Nationally, public schools lost 1.5 million students last school year — roughly a 3 percent drop and the largest since the beginning of the century, according to federal data. Much of that enrollment decline was driven by parents holding their kindergartners out a year. The question now is whether the profound frustration over remote learning and mask mandates, combined with recent outrage over critical race theory, could motivate more families to seek other options.

Experts say it’s too soon to know for sure whether enrollment loss will continue, but some see signs that the downward trend isn’t over.

In Virginia’s Arlington Public Schools, officials initially projected that the 2,000 students who left the district last school year would return this fall. But in May, board members said they weren’t so sure and were recalculating the budget based on a lower figure of 28,500 students, down from almost 30,000.

Some of those families not returning could be homeschooling, according to a recent paper from the Home School Legal Defense Association, which suggested the jump in that population seen last year will continue. And EdChoice’s surveys showed an increase in homeschoolers from 8 percent in 2020 to 14 percent this year

Walker, an organizer of Open Schools USA, is among those calling for parents to abandon public schools. The volunteer network of reopening advocates plans to announce a “strike” Thursday, with parents pledging to homeschool or enroll their children in pods or private schools this fall. Across various platforms including Facebook, Twitter, TikTok and email, Walker said the network has reached roughly 180,000 participants. In Oregon alone, the group’s goal is to see 30 percent of the state’s more than 560,000 students withdraw before October, which would drastically impact state funding for education.

Whether the group has the power to follow through on its bold promise or not, one thing is clear: District leaders are worried they won’t make up last year’s enrollment as they watch more students leave for private schools. Some hope to lure families back to school this fall, using outreach methods such as text messages and home visits. And public school advocates are worried about the lingering impact of school board protests over critical race theory.

Joshua Starr, CEO of PDK International, a professional organization that polls the public annually on attitudes toward public schools, said parents value racial diversity in schools. A couple months ago he thought the uproar surrounding anti-racist efforts would blow over.

“Now I think otherwise,” he said, but added there is not yet reliable data on what “the silent, but reasonable, majority actually thinks” about the theory.

New data from California voters shows more than half of parents feel positive toward public schools in general and even more positive toward their local schools, with 60 percent giving them an A or B. But Bruce Fuller, an education and sociology researcher at the University of California, Berkeley, said “a slice of parents still appear angry over union leaders’ reticence to reopen schools last winter, even after the [Centers for Disease Control and Prevention] gave its OK.”

He predicted further jumps in charter and private school enrollment by August, especially if districts don’t allow virtual or more personalized options for families who prefer that.

The California survey didn’t specifically ask about critical race theory — a legal argument that racism is embedded in U.S. systems and institutions. But Democrats and Republicans were split over whether schools should spend more time on lessons about racism and inequality.

Open Schools USA formed in November over the reopening issue. In March, organizers held rallies marking one year of the pandemic in at least 50 cities. But Eileen Chollet, a Fairfax, Virginia, parent who interacts with Walker’s group through Facebook, said she wondered whether it had enough organizing power to “stage a national campaign.”

But Sarah Ronchak, an Elk River, Minnesota, parent and another Open Schools USA organizer, said their efforts are part of a broader movement away from traditional schools.“It will definitely take off,” she said. “However, it may take one more year of public school for people that are on the fence to really make a move on it.”

Ronchak, a full-time youth basketball referee, said she got involved with the group because “distance learning was an absolute nightmare” for her autistic son. And when he returned to school in February, he was bullied for not wearing a mask even though he had an exemption, she said. Minnesota has lifted its statewide mask mandate, but some local jurisdictions haven’t. She said she’ll likely homeschool this fall.

Walker said the group has members across the political spectrum, but their concerns have expanded to include potential COVID-19 vaccination requirements and universal mask use, issues that more conservatives have opposed. Nonetheless, she added, they recoil at the term “Trumpers.” The leaders ran a GoFundMe campaign to set up their website, but otherwise the group has no outside funders. Walker spends her own money on flyers, posters and graphic design.

Some organizers of the group are also active in No Left Turn, which has filed litigation over practices in schools related to critical race theory. Founder Elana Yaron Fishbein has become a leading voice on Fox News arguing schools are trying to indoctrinate children, and members of local chapters are behind many of the protests at school board meetings.

“Parents want children to learn about racism. We don’t want it taught necessarily in the way that it is,” said Walker, a Democrat. “If you’re going to tell the bad and the ugly, you need to tell the good and the beautiful.”

National Parents Union President Keri Rodrigues said Open Schools USA has sought guidance from her group in the past, but is not an affiliate. Rodrigues, however, agrees more families may be considering other options this fall.

“We watched a nationwide failure of our public education system,” she said. “I expect to see a percentage of parents that say, ‘I’ve actually found something that works better for my kids.’”

The National Parents Union’s most recent poll shows that more than 40 percent of parents would still choose online learning or a hybrid model this fall, but the survey didn’t specifically ask about leaving public schools.

Walker’s hope is that if districts see more enrollment loss, they’ll pay more attention to the needs of parents.

“After their numbers drop drastically, our hope is to be afforded a meeting where we can negotiate terms of enrollment,” she said. “It’s insane that no one has represented our children throughout the decision-making process that directly affected them.”

When the RAND Corp. surveyed superintendents during the winter, COVID-19 health concerns, delaying kindergarten and opposition to virtual instruction were the leading reasons behind enrollment loss, not “politically motivated anti-[critical race theory] reasons,” said Heather Schwartz, a senior researcher at RAND. But she added, “the subject is fast-moving.”

Khalilah Harris, acting vice president for K-12 policy at the left-leaning Center for American Progress, characterized the protests over critical race theory as mostly a fringe issue, but added “fringe can become mainstream with the right messaging.” She doesn’t, however, expect “large swaths of communities would move their children to private school and explain it as a result of not wanting students to learn difficult yet accurate American history.”

Some advocates for in-person learning have never strayed from their core issue. They include Chollet, a member of Open Fairfax County Schools. The Fairfax district lost 11,000 students last year, but is expecting to regain most of that this fall.

Some partisan Democrats tend to “paint all parents in favor of open schools as right-wing astroturf,” she said. “I won’t deny that the reopening groups are probably redder than the surrounding areas, but Fairfax is one of the bluest areas in the country.”